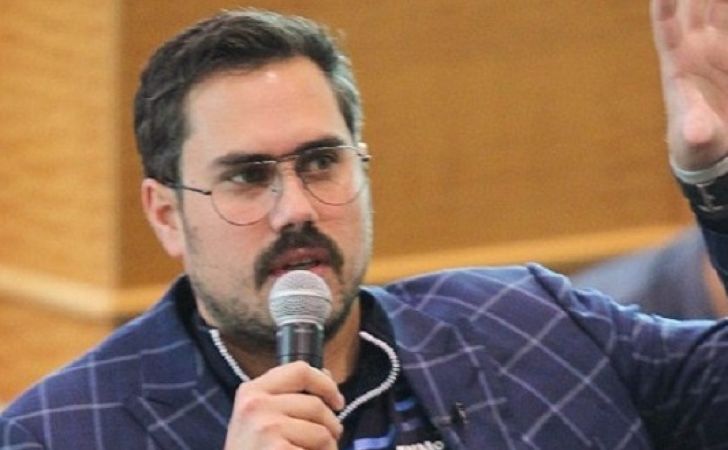 Dan Katz aka ‘Big Cat’ is known among the fans for co-hosting the podcast, Pardon My Take. The podcast is released three times a week. Although Dan talks a lot about what’s going on in the sports world with a humorous twist, he rarely speaks anything about his dating or married life despite the fact that “Dan Katz wife” is an often inquired term about him.

Podcasts are supposed to be a platform wherein the host and guests speak vividly about their life behind the doors. Nevertheless, Dan never really liked this idea. Partly because of the potential intrusion, it might cause against his family. However, we have dug deep and found out a few photos of his beloved partner of many years.

Besides, there are rumors that the Chicago-based blogger is married and the father of one kid. Are the rumors true? Besides, Dan once did talk about expecting a baby. Well, let’s take a further look at his personal life.

Is Dan Katz married to a wife?

First things first, let’s clear the air regarding Dan’s personal life. The man is in a relationship with his girlfriend for a long time. The name of his girlfriend is not out yet, even so, Dan’s fan calls her ‘lady cat.’

A befitting name for the Big Cat’s partner, don’t you think?

Now the big question is, has the Big Cat and Lady Cat tied the knot yet? Some eagle-eyed fans claim Dan is indeed married to his girlfriend. How? According to his fans on Reddit, Dan’s random 4th of July week-long vacation in Paris in 2020 was probably a honeymoon.

What’s really adds to the point is that Dan is quite secretive about his personal life so it might be the case. Besides, Dan has mentioned how he wants to keep his professional and personal life on a different path.

Well, be that as it may, the blogger is quite happy with his life and we as a fan wish to do see the same.

Dan once mentioned expecting a kid: Has He Become a Father?

Back in March 2019, Dan surprised his fanbase after he shared a tweet. In the tweet, he claimed that he and his girlfriend or wife are expecting their first kid. In addition, he also mentioned he will become a father in the coming June of the same year.

Some personal news – I’m going to be a Dad in June. https://t.co/qxCkN7AA1K

He also shared an article published on Barstool Sports where he openly talked about keeping his life private. In the article, he mentioned expecting a baby boy. Dan and his wife welcomed their son on 19th June 2019. He announced the big news on Twitter with a photo of his son’s birth picture and birth certificate.

Its been around a year since his infant’s birth and he has turned two years old this June.

Apart from announcing the birth of his child, Dan also added how he won’t be entertaining any other queries regarding his kid. He wrote,

“I won’t be sharing much more than this right here. I won’t be making content out of my child’s birth or upbringing. There is no right or wrong approach to this, just a personal one.”

He further adds while asking his ardent fans to respect his decision,

“I want to give my future son the most normal upbringing possible and that includes not putting his childhood on the internet for the world to watch. That’s my personal choice and I hope you can understand.”

Apart from talking about his kid, Dan also said how he wants to keep his partner away from the spotlight. He doesn’t want his fame to pose any problems to his family life. He wrote,

“She supports me through everything, the trips, the long nights at the office, moving from Chicago to NYC, the 24/7 sports, she has had my back through ups and downs and all I want to do is have hers in the same way, and that’s by protecting her and hoping you guys can do the same.”

Well, we definitely understand you Big Cat and we sure hope you are a great father and partner to your girlfriend or your wife.