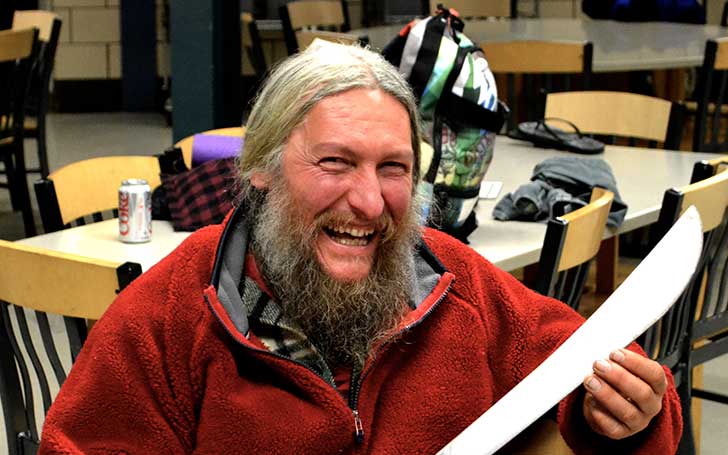 Eustace Conway is an American naturalist and reality star. Conway is a famous face of History channel’s reality show, Mountain Men. Besides he has been the subject of Elizabeth Gilbert’s book The Last American Man.

Even though Conway has worked on television for some years now, he’s kept his personal life under the media radar. Here, we’re digging out some untold truths of his life. Stay with us.

Television star and naturalist, Eustace Conway was born on 15 September 1961 in Columbia, South Carolina, the United States of America. The details about his early life and family are not made public as of yet. However, it’s known that Conway has three siblings, Walton Conway, Judson Conway, and Martha Conway.

Eustace Conway left home at the age of 17 and went on to live in an Indian tipi. He lived in the tipi for nearly 17 winters where he only wore homemade buckskin clothes. At 18, Conway canoed 1,000 miles on the Mississippi River.

He Walked Across the United States

Later, Conway kayaked the entire southern coast of the northern US state, Alaska. Not only America but Conway has backpacked over the wilderness of Central America, New Zealand, Australia, and Europe.

He Claims to Have Set a World Record

The 58-year-old American reality star claims he set a world record for coast to coast travel from the Atlantic Ocean to the Pacific Ocean on horseback. As per his bio, Conway traveled the distance on horseback in 103 days.

Meanwhile, The New York Times reported the world record of crossing the North American continent on horseback was 62 days. The journey was traveled by two kids, Bud and Temple Abernathy, aged 11 and 7 in 1911.

On another occasion, Conway traveled nearly 800 miles across the Carolinas in 21 days.

Eustace Conway is one of the prominent faces of the History reality series, Mountain Men. He started working on the show in its first season in 2012. The show depicts Conway’s lifestyle from performing his chores and preparing food for the coming winter.

Besides Eustace, the show has also featured the lifestyle of other nature lovers such as Tom Oar, Charlie Tucker, Rich Lewis, and more.

Has a Degree in English and Anthropology

Eustace Conway’s formal education is not well described as he left home at 17 and started living in the woods. His experience of living in the wilderness has taught him what a university student can’t learn. But Conway holds a University degree in anthropology besides his real-life experience. He also has a degree in English from Appalachian State University.

Eustace Conway has been living in the Turtle Island for many years. In 2012, he got into trouble after the local government decided to shut down public access to the island because its traditional buildings violated building codes.

After that, Conway contacted the North Carolina Building Code Council in December that year and was close to reaching the resolution. However, after a short time, Conway was arrested for trespassing on a neighbor’s property.

Is He Married? Who Is Eustace Conway Wife?

Taking an idea about Conway’s lifestyle and his social media, it is pretty evident Eustace is not married, considering, he has not kept it secret.

There are not post that hint anyone who could be called his wife. Thus, it is safe to say the mountain man is single and not married.

Eustace Has Had Romantic Relationships in the Past

In the 2002 book The Last American Man, the writer of the book Elizabeth Gilbert touched upon his relationship. Based on the statement by Eustace and his romantic partners in the past, Gilbert even stated the fact that he has quite a traditional view of relationships.

The book states Eustace’s idea of having a woman who could bear him 13 children. About the same, he said,

One hundred years ago a woman wouldn’t have been scared by that idea.