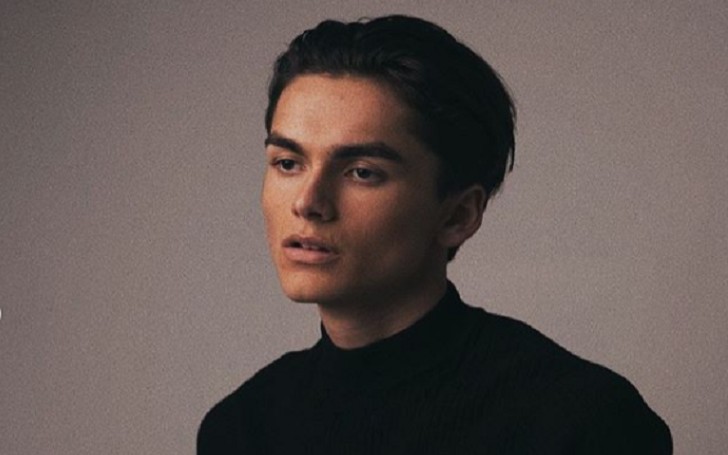 Ashton Arbab is one of the rising youngsters who rose to stardom with the role of Dev Cerci in the hit ABC’s TV series General Hospital. He has also deserved credit for his performance on Most Likely To and Guide To Monster Hunting.

In addition to acting, Arbab has tried his hands in the music and also released a single ‘I Fall In Like Too Easily.’

Well, talking about his private life, the 17-year-old has dated several girls. Let’s find out who is Ashton Arbab’ girlfriend at present?

In the article, we will also include many other unexplored facts about Arbab including his parents and other stuff!

Who are Ashton Arbab Parents?

He is the son of Connie Constance McCullough and Bobby Arbab. The power couple has been happily married since August 1991.

His father Bobby is from Manhattan Beach, California. He currently serves as the director of sales marketing at the marketing company called On-Line Sales. He attended St Patrick’s College in 1972 and graduated with a Bachelor of Business Administration in 1975. Arbab later went to London Business School to study marketing and completed his graduation in 1977.

While talking about his mom, Connie hails from Memphis, Tennesse. She currently resides in Manhattan Beach with her husband and children. She attended Millington Central High School and later studied at the University of Memphis.

Ashton shares a strong bond with his mom. He frequently posts throwback photos with his mommy on several occasions like Mother’s Day.

Ashton Grew Up With His Older Sister

He has an older sister, Princess Brittany, born in October 1999. She went to Mira Costa High School and later enrolled at Santa Monica College, graduating with child psychology in 2019.

The family of four are close to each other and often go out to spend quality time together.

His Early Life and Education

Ashton Arbab was born on February 14, 2003, in Manhattan Beach, California. He spent most of his childhood days in Manhattan. Arbab attended Mira Costa High School.

He belongs to American nationality. Arbab has a mixed ethnical background as his father is from South Asian roots.

He discovered his interest in the acting and other entertainment fields at the tender age of six. He spent his early three-years, performing in a Children’s Theatre Black Box for Starlight Productions.

Arbab made his debut, portraying little Jhonny in a short movie Salsera in 2012. The emerging actor came into the light after his breakout performance on the TV series Mutt & Stuff in 2016. He also appeared in The Loud House, Most Likely To, and Alexa & Katie in the year 2018.

Ashton gained further popularity with his role Dev Cerci in the hit ABC’s television series General Hospital. He appeared on the project from 2019-20.

Apart from his acting career, Arbab is also a singer, musician, and dancer. He released a song I Fall in Like Too Easily in 2019.

Who is Ashton Arbab Girlfriend?

The multi-talented young boy is currently dating Maggie Grace. His girlfriend Grace, 17, is a social media star and TikToker.

The couple made their relationship public in late July 2020. Ashton shared a series of six-photos in a post with his new gf from Lake Tahoe, California on 31st July. In the post, the lovers are seen hanging out with Ashton’s family.

A day before, Grace also confirmed her relationship with Arbab via Instagram. She captioned the image, “my boy.”

Furthermore, on September 12th, the actor also wished his bae on her birthday posting a number of photos of themselves. He wrote on the photo,

“happy 17th birthday my love! hope you have the best day ever. can’t wait to celebrate with you! xoxo.”

It looks like they are quite into with each other.

His Past Love Affairs: Dated Sharlize True and Kenzie Ziegler

Ashton Arbab was previously in a relationship with a TikTok star True. The couple began their lovey-dovey back in April 2019. He also attended Sharlize’s homecoming in October of the year.

On 20th April 2020, Arbab also celebrated their one year anniversary on Facebook. He shared several adorable photos with his ex-girlfriend on the occasion with the caption,

“Happy 1 Year Anniversary to my girlfriend Sharlize True❤️we have had a fun year filled with amazing memories and we have grown up together in this crazy world. Thank you for being my best friend, I am glad God put you in my life. I will love forever❤️”

Despite all that, their relationship couldn’t last long and they broke up in mid-2020.

Furthermore, Ashton also dated Mackenzie Ziegler in 2018. In spite of their early romance, they broke up after months of dating. There are reports that the duo separated after Ashton cheated on her. But, he later denied all speculations and said the reason behind their split was that they wanted different things.

His former bae Ziegler is a dancer, singer, and actress as well.

What is Ashton Arbab Net Worth?

He has earned a considerable net worth from his career in the entertainment world. His estimated fortune stands at $500,000 in 2020.

Other Interesting Facts of Ashton Arbab