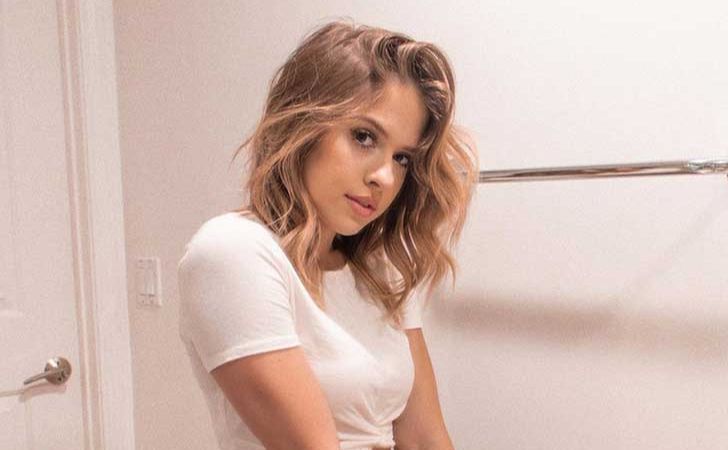 Kelianne Stankus has quickly gained a lot of followers on every social media platform. Many of us are curious to know about Kelianne’s relationship status. Well, the TikToker is reportedly in a new relationship with her model boyfriend.

Today we’re going to find out some intricate details on her romance with her new beau. In addition, let’s find out about her ex-boyfriend and know why did they broke-up?

Who is Kelianne Stankus Dating in 2020? New Beau Identity

For the past couple of months, Kelianne is in a happy relationship. She is dating Chase Mattson, for some time now. Her boyfriend is a model who works for big agencies including LA Models, IMD Inc, Dragon Fly Agency, and Select Model Chicago.

The duo has been going out for a few months as evident by their Instagram posts. Kelianne shared the first picture with her BF on June 4th, 2020. In the post, she is wishing Chase on his birthday.

What really confirmed that they are couples is the caption. Moreover, in the picture, the love birds are kissing so no questions there as well! They have indeed coupled up.

Besides, the couple has a lot of similarities between them. Like both of them are suckers for Pizza. Moreover, they like to do adventurous stuff together. Just a few days ago, she added a picture with her lover during their visit to Lake Arrowhead, California.

24-year-old Stankus mentions how she wants to go on more adventures with Chase and we sure hope they do.

Nevertheless, while many of her fans are happy for her newfound love, some are definitely not shipping the duo.  Why? Because they truly wanted ‘Kaylor‘ to happen.

For those living under the rock, ‘Kaylor’ is the ship name for Kelianne and Tayler Holder, a fellow TikToker.

When did Kelianne and Chase’s Relationship start?

Stankus is generally public about her personal life and she really took us all by surprise when she revealed her affair with  Chase. As for when did she started romancing this hot model, there are some clues on her social media profile.

On April 28th of 2020, Taylor tweeted about wanting a boyfriend. It was all fun and games at first but her cryptic tweet on May 2nd said otherwise.

In the tweet, she wrote, ‘So who wants to accidentally fall in love.’ Subsequently, a few days later, Tayler Holder tweeted that Stankus is going on a date.

Guys @keliannestankus is going on her first date in awhile today! Aww they grow up so fast!

Fast forward a few weeks later and bam, Kelianne shared her first snap with Chase. It can be assumed that Tayler might be talking about these two going on a date.

In addition, both Chase and Kelianne have written a certain date on their bio. The date says 5/25/20. It seems they officially got together on this specific day.

Is Kelianne Stankus’ boyfriend Chase a Father of Two Daughters?

Yes, the rumors are indeed true, ladies and gents. Chase is a father of two daughters, Hazel and Nora Mattson. We know the majority of you were still confused about whether the rumors are true or not. But now you don’t have to.

Now talking about his daughters, he shares them with his ex-girlfriend. Hazel is his eldest daughter, born on 20th June 2014 and Nora is the younger one, born on 25th October 2017.

Her eldest daughter is already following on the footstep of her daddy. She is a child model.

Meanwhile, when fans found about Chase’s daughters, some fans had some funny opinions. They were saying that Kelianne is so young and not ready to be a step-mother, just yet.

But Who was Chase’ Ex-Partner? Was he married and had a wife?

Chase shares his two bundles of joy with his ex-girlfriend, Devyn L Jackson. The nature of Chase’s relationship with Devyn is still doubtful.

We can see tons of photos of his former flame on his daughters’ joint Instagram account, @Mattsongirls. In the majority of the posts, he always mentions Devyn as my girl or mommy. This makes it pretty hard to articulate what type of relationship they had.

Despite their differences, the duo still cares deeply for their kids. They are co-parenting their daughters.

Kelianne was Dating Zach Cox: Why did they broke-up?

Prior to her current affair, the 4ft 10 inches celebrity was romantically involved with model and social media influencer, Zach Cox. The duo reportedly dated for around a year before splitting in 2019.

When the former pair came out as couples, they quickly became a fan favorite. Both of them used to appear occasionally on each other’s Instagram account.

Despite all the love they had, their relationship ended. Kelianne first announced their tragic split in a YouTube video. In the now-deleted video, she held back tears while announcing the tragic news.

Although Stankus didn’t go into details about why they broke up, it sounded like it was Zach who dumped her. At the moment, Zach is dating a girl named Quincie.

What about Kelianne Relationship rumor with Tayler Holder?

If you’ve been following Stankus for some time then surely you don’t see Kelianne with anyone except Tayler. From the beginning, she has been close to The Hype House Member.

Kelianne and Tayler’s adorable bond was something their fans always wanted to see turn into a real-life romance as well. Nonetheless, both of them never confessed their love for each other.

After her newest relationship announcement, the ship is going to stop for now.

All About Kelianne Stankus: Details on Her Parents, Siblings, Boyfriend