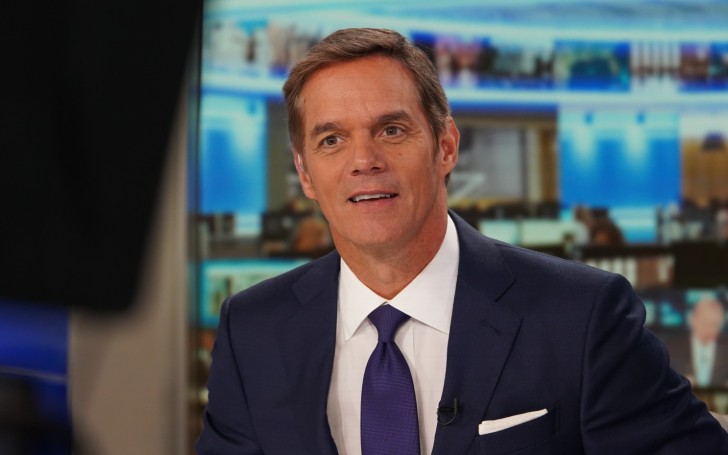 The popular on-air personality Bill Hemmer currently serves as a host of the TV program Bill Hemmer Reports which aires at 3 p.m. on Fox News Channel. He filled in the mid-afternoon slot after journalist Shepard Smith stepped down as the host in October 2019.

In addition to his successful professional career, the veteran media personality has kept the things related to his love life very private. Bill was in a years-long relationship with his model girlfriend.

Today here we try to find out some hidden details about his hush-hush dating life. We will find out who is Bill Hemmer wife, if he has any, that is.

Who is Bill Hemmer wife? Is he married?

Well, there isn’t any Mrs. Hemmer as of yet. Bill isn’t married to anyone and neither has ever talked about his plan to walk down the aisle in the future. He has kept every personal detail to himself.

His tendency to keep things very private also gives rise to the speculations if he is gay. It’s common for tabloids to associated these rumors with celebrities who remain secretive about their love life.

Did Bill Hemmer ever turned ex-girlfriend Dara Tomanovich into his wife? Story of their love

Bill Hemmer was in a committed relationship with his now ex-girlfriend Dara Timanovich. But despite their years-long bond, the two never decided to start the new chapter of life as husband and wife.

Hemmer began dating Dara in 2005. The former flames made their first apperance, after the two stepped down to attend the Victoria’s Secret Fashion Show on November 9, 2005, in New York City. They later also appeared together several times in various places.

The two initially looked too much into each other. However, their relationship didn’t last long, and they broke up after almost 8-year of romance in 2013.

How did their 8-year romance come to end?

The last time Hemmer and his bae Dara appeared together was at the Gala event organized at the City Centre in Berlin in 2013. The same year, they called it quits. Nonetheless, there are no valid reasons why the two parted ways.

In 2014, Timanovich made headlines after her DUI arrest in June 204. According to Page Six, the model had crashed her Porsche in Manhattan.

Born in 1969, in Toronto, Dara Timanovich is a model who began her modeling career as a teenager. Timanovich made a major breakthrough after meeting German designer Karl Lagerfeld at the age of 18 in Paris. Karl hired her to become the face of Chloe, the French luxury fashion house.

Timanovich also spent the next five years in Paris, modeling for several popular publications and fashion brands like L’Oreal, Marie Claire, and British Vogue. Her Instagram bio shows that she currently works for the B&M Models agency.

Who is Bill Hemmer dating now?

Hemmer is not dating anyone at present. He’s currently cryptic about opening his love life to the media. Although the journalist is often photographed cheerfully with women, he is yet to come out with any relationships.

He lives in New York City.