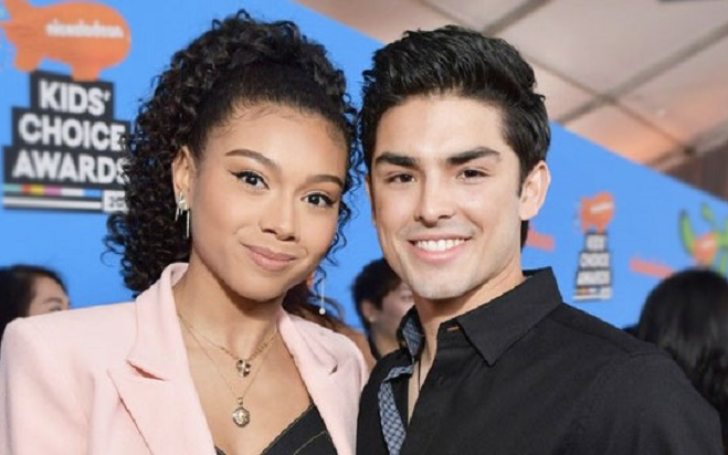 Diego Tinoco is one of the rising stars who rose to stardom after his role in Netflix’s teen comedy-drama On My Block. He played Cesar Diaz, an intelligent teen forced into the gang life, and also Monsé Finnie’s (played by Sierra Capri) boyfriend on the series.

The on-screen lovebirds separated at the end of season two. The duo shared such terrific chemistry on-screen that many fans started believing they are dating behind the scenes as well?

Is it true? If not, then who is Diego Tinoco’s girlfriend? Let’s find out everything about their on and off-screen relationship!

Are Diego Tinoco and Sierra Capri in a relationship?

Bad news for all the Diego Sierra shippers out there as the on-screen couple is not dating in real life. They are just close professional colleagues. Diego and Sierra are not filming at present, but the pair does have a lot of affection for one another.

In many of the interviews, the actor vividly talks about his tight bond with Sierra. It’s as if they are a couple but not the relationship type. While talking in the same matter, the 22-year-old Diego once told Teen Vogue,

Well, it is one of those relationships where you can never tell. By the looks of things they seem to be girlfriend and boyfriend, however, their statement about each other states otherwise.

Diego Tinoco and Sierra Capri were comfortable from the beginning: Their steamy makeout sesh

Talking about their on-screen undeniable romance, they began their lovey-dovey in the first season and went separate ways in the following season.

They were since in an on-again, off-again relationship. Cesar and his girlfriend Monsé faced a lot of new challenges in season 3. He told Entertainment Tonight,

“I definitely ship them. I think I would love to see them together forever, happily ever after, Notebook style.”

Besides, the two were pretty comfortable with each other’s characters since the audition which also went quite well. The 22-year-old Sierra told Vulture about their long steamy makeout session while giving an audition for their romantic roles. She maintained,

“I was like, ‘Yeah, let’s just go, let’s just see what happens.’ ‘Cause we vibed. So we went into the room and it was a scene where we ended up having to kiss, and no one stopped us. Later down the line they told us, ‘Yeah we were just gonna see how long you guys kept kissing. We weren’t gonna stop the audition until you guys did.”

What about the 4th season of On My Block? Take a look at its cast members

To the dismay of the fans, Netflix is yet to confirm the show’s fourth season. Its third season also ended with two fewer episodes than the previous seasons. The first season of the show premiered on Netflix, on 16th March 2018.

Does Diego Tinoco have a girlfriend in real life?

No, Diego doesn’t have a girlfriend. The teen actor has kept his romance out of the public glare. He looks more focused on his rising career. Similarly, his TV-GF Sierra Capri is also not dating anyone publically.

You May Also Like: Is On My Block star Julio Macias married to his girlfriend?

It looks like Diego is not willing to commit. It looks like the actor has decided to totally abstain from a committed relationship altogether. Maybe it is for the better as furthering his career is what matters the most to him.

Even so, we’re sure of one thing, if Diego happens to make a girlfriend in the future, he will definitely share with the rest of us.