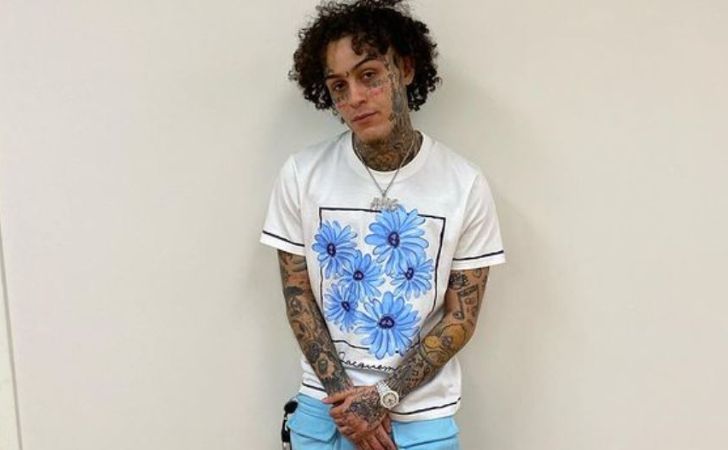 Lil Skies, born Kimetrius Christopher Foose, is an American rapper, singer, and songwriter, who made his debut with the mixtape Life of a Dark Rose. Not only this but a number of his albums & singles are listed in Billboard Hot 100, including, I, Nowadays, and Red Roses.

Picking up an inspiration who was a struggling rapper, Skies has come a long way as a musician. With all the professional success, he also leads a financially sound life with a huge net worth. Further, he has also maintained a sound relationship with his girlfriend and is also a father to a son.

There are a lot more interesting facts about this young rapper that you would love to know. Well, in that case, let’s begin.

Successful American rapper Lil Skies was born on August 4, 1998, in Chambersburg, PA. He is 22 years of age at present. His father’s name is Michael Burton Jr., and his mother’s name is Shelby Foose.

As a child, Skies grew up in his hometown but by the time he was in third grade, his family moved to Waynesboro, Pennsylvania. He also has a younger brother named Kimetrius Foose. Like him, he is also a rapper and goes by his stage name Heartbreak Kid.

Well, he lived with his family until he finished high school. Later, he moved to Shippensburg, Pennsylvania, where he joined Shippensburg University. However, he dropped out of the university to pursue his career in music as he had already gained decent followers on YouTube & Spotify.

His Father Aspired To Be A Rapper

While Lil has already become one of the most successful rappers, the inspiration behind his career was his father. Like him, his dad Michael too wanted to become a rapper and even performed in small gigs and stage shows.

If you didn’t know, Skies stage name is also inspired by his father’s stage name Dark Skies. Unfortunately, he could not make it big as a rapper. To make the ends meet, he worked part-time jobs along with following his passion. When Lil was around 11, Michael was even injured in a chemical explosion at the Rust-Oleum plant near Williamsport, Maryland.

Lil Skies Was Into Rapping At 3 Years of Age

Though Lil achieved fame as a rapper at around 18, he was actually into rapping when he was just 3 years old. Needless to say, he developed a love for music mostly because of his father.

Well, he continued his love for music for years, finally releasing his debut single Red Roses in 2017. The same year, he also came up with two other singles Lust, & Nowadays. While Lust received mediocre success, Red Roses and Nowadays gained him huge fame and even made it to the Billboard Hot 100 list.

The following year in 2018, he came up with a number of singles among which I Know You, Creeping, World Rage, was decently successful. His next big single came in 2019 with I. The single was listed at number 39 in the Billboard Hot 100 list. In the year 2020, he released over 7 singles along with Havin’ My Way, which he collaborated with Lil Durk. Over the course of time, he has released over 40 singles.

22 years old Lil has released over 2 albums and 4 mixtapes so far. He came up with his first studio album Shelby on March 1, 2019. Similarly, his second studio album Unbothered made to the market on January 22, 2021.

As a rapper, Skies has also appeared in many music videos. His first music video came in 2013, which was Live 4 the Moment. This was followed by his work in Signs of Jealousy, Red Roses, I Know You, Name In The Sand, Havin My Way, Dead Broke, and numerous others.

Lil Skies Girlfriend: Has A Son With Her

Though Lil mostly kept his love life away from the media, he shocked everyone with the news of his pregnant girlfriend. He made the news public during a live session with REAL 92.3 LA.

His girlfriend Jacey finally welcomed the child on July 30, 2019. The couple has named their son Kimetrius Jr. Needless to say, they share a great relationship with their kid. Jacey often posts photos of her son with Lil on her social media and they look pretty adorable together.

On the 1st birthday of Kimetrius Jr., the family showed off their happiness on social media. Jacey even posted a number of photos of her child on her Instagram wishing him his birthday.

Is He Getting Married?

Though Lil is dating his girlfriend Jacey for a while now, he has not stated his plans to marry. It looks like, he is not going to tie the knot anytime soon. However, we hope, we will get to see Lil Skies’ wife soon in the future, which could be his partner Jacey.

Foose Is Against Drugs

Drugs are pretty common when it comes to the community of rappers. Or at least we see a number of rappers being arrest or die because of drug abuse. but things seem completely different in the case of  Foose.

He has stated on multiple occasions that he tried to avoid drugs all the time. Further, he has also stated that he has seen his friends who are completely ruined because of these things.

Lil Skies Merch: He Is a Business Person As well

to those who didn’t know, he is not just a singer but a business person as well. In fact, he even owns a merch collection that he sells online. On his online store, store.lilskies.com, he sells all kinds of clothing including t-shirts, trousers, socks, caps, and several other accessories.

Just to let you know, his online business yields good fortune as well.

How Much is Lil Skies Net Worth?

He is a successful rapper, composer, business person, and actor as well. Thus he has multiple streams of earning. Talking of his net worth, he is estimated to have around $3 million in net worth as per Celebrity Net Worth. His wealth is pretty likely to increase in the future.