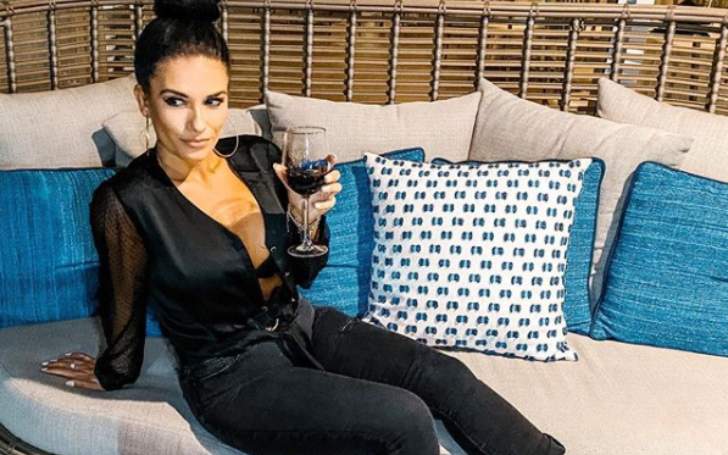 Derynn Paige came on everyone’s radar after her appearance in the MTV reality show, Double Shot at Love. In the show, Jersey Shore alums Paul D and Vinny Guadagnino are trying to find love amongst 20 girls, one of which is Darryn.

Since her apperance, fans dubbed her as the hottest chick in the show. What’s more, her naughty behavior tends to draw a lot of attention, especially from her male fans.

Similary, her male and female fans alike are quite interested in knowing if she has a boyfriend or not? We all know about her on-screen stripper beau but are they still together, that’s the big question? Today let’s find out everything about Derynn including her early life, parents, education, and other interesting facts.

Derynn Scine aka Paige’ parents are involved in real estate

The hot reality star was born Derynn Scine on August 25, 1993, in New Jersey, the United States. Upon starting her career on TV, she changed her surname to Paige and now she is known only by that name.

She is the of Leanne M Scine and Don Scine. Both of her parents are in the real estate business. While her mother Leanne works at Keller Williams, her father is a sales associated at Terrie O’Connor Realtors.

Derynn grew up in the Franklin Lakes township in NJ. There is no information regarding her siblings if she has any.

She is an American national and belongs to caucasian ethnicity. Talking about her ancestry, she is 25% Austrian and wants to visit Austria someday.

Derynn Paige was awarded by the NJ Governor during high school

She studied at the Immaculate Heart Academy in Washington Township, an all-girls school. During her time in the school, Derynn together with her science teacher Lisamarie Perini created an environment club, Go Green Revolution.

The main goal of the organization was to administer positive environmental changes. For this work, she and her teacher both were honored with Environment Excellence by the Governor of NJ in 2010.

After graduating from college in 2015, she joined the Parsons School of Design in Los Angeles.

Paige was an exceptional Golfer before injury halted her career

It might surprise many of you that this hot brunette was once on a verge of becoming great golf. Yes, while studying in high school, she used to play golf. She even participated in several competitions.

Derynn once In 2011 alone she participated in six competitions. All of her scores were under 60 which is terrific for an amateur standard.

She worked several odd jobs before becoming a reality star

Prior to becoming a country famous star, Paige had a lot of side hustles. Around the time she graduated from college, she was a full-time nanny, a bartender, and bottle service on weekdays. In addition, she also started an online T-shirt store named Goddess of Easton in 2015.

While studying in college, she also worked part-time in various positions. She was an intern at Icons Boutique, LLC from Sep 2012 to Dec 2012. Subsequently, in May 2013, she started working as a Sales Associate at Anthropologie from May 2013 to Oct 2013.

Apart from that, Derynn is a party host as well. In December 2019, she hosted a party for College Babes.

She once raised money for St. Jude Children’ Research

In August 2020, Derynn did a fundraiser for the St. Jude Children’s Research on the occassion of her birthday. The hospital focuses on treating children’s cancer.

Since its inception, the research center has been able to increase the survival rate of children suffering from cancer from 20% to 80%.

Since 2019, the hot mama is appearing on the MTV show. From the beginning of the series, Derynn became a fan favorite with her unapologetic attitude and her nature to prank just about anybody. She herself admits of being “bats–t crayy,” and so far we all have realized that she is indeed what she claims to be.

Now many of you might be thinking that surely this isn’t her first time appearing in front of the screen? A person who looks so comfortable in the camera must’ve previous experience as well. Guess what, she neither had any modeling experience nor acting before entering the show.

As for how she got the part. For starters, she didn’t give any audition or something. She revealed in an interview at Hedrich Files Podcast Casting agents of the show found her via her Instagram account and Dm’ed her. At the time, she didn’t have any idea as to what is she signing up for. However, Paige was just out of a relationship and she decided to get on with the show just to get back on her ex-boyfriend.

The 27-year-old wanted to get married when she turned 25, however, a terrible setback sent her plan on the wayside.  Reportedly, her then-beau cheated on her consequently crushing her dreams.

If you’ve been following the show then surely the name Pretty Ricky rings a bell. Yeah, that’s the male stripper the Double Shot at Love castmates came across during their wild night at a Las Vegas strip club.

Of all the 20 girls in the vicinity, Derynn was instantly smitten by the curly-haired hunk and the feelings were mutual from the other side as well. The initial liking allowed Ricky to enter Derynn’s suite, however, the night didn’t turn out the way the duo had thought out. Paige’s lover had an erection problem.

Despite all that, Ricky asked her out and they even went on a date. At the Las Vegas strip club, the pair shared their past dating history and Paige even told him about her cheating ex-partner. Upon hearing her story, right there and then he asked her if she would become his girlfriend? She immediately answered yes.

Throughout the year 2020, Ricky and Derynn had numerous flirty exchanges all over social media. Moreover, in September 2020, she even tweeted,

I got the real double shot at love #doubleshotatlove

Her tweet led fans to believe that they are still together. We sure hope they are as both of them are cute together.

Ahead of the Season 2 premiere of Double Shot at Love, Derynn decided to take her already breathtaking body to the next level. She shed a 17-pounds and we’re gasping.

The reality star announced the big news via her Instagram account. In the picture, where she is showing her flat tummy, she wrote, “Officially down 17 pounds today.”

Aside from mentioning her weight loss, she also warned fans to not pass out as she looks way better than season 1. She writes, ‘PSA: I did not look like this on the upcoming season, so this is your warning.”

To achieve her goal, she teamed up with WW (Weight Watchers).