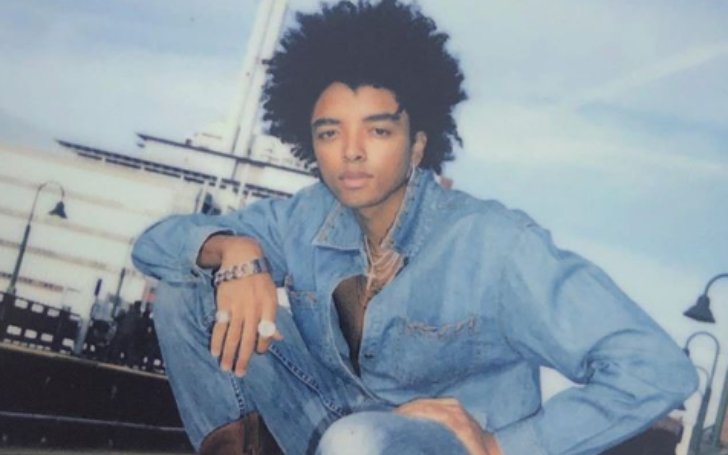 Odiseas Georgiadis is a Ghanian actor best known for his role in The Perfect Date. The handsome actor and singer have become quite famous but still not much is known about him.

However, today we are going to tell you everything you should know about Odiseas. From his family to his relationship status? We’ve all the facts here!

Who is Odiseas Georgiadis? Was Born in Ghana

Odiseas Gregory Georgiadison was born on September 21st, 1996, in Tema, Ghana. He is the eldest son of his mom, Eunice Russell, and his dad. After living in a West African country for a few years, he moved to the US.

The actor rarely talks about his parents but often shares photos of his mother. His mother Eunice has her own Instagram handle.

The Ghanian-born American actor belongs to mixed ethnicity. His mother is a Ghanian, whereas, his father is a Grecian.

On one hand, Odiseas’s mom, Eunice is a very public figure in her own right. She runs an Instagram account @eunice_opulence where she shares beauty & make-up-related content.

And then there is Odiseas’s father who has been hidden from the public. The only known fact known about him is that he is a Grecian.

It looks like, soon after the birth of Odiseas and Ippokratis, his mother and father separated.

Odiseas moved to the US with his brother Ippokratis Georgiadis. The brothers were accompanied by their mother. On May 9th, 2016, the 24-year-old actor shared a throwback picture of his mom and brother.

The picture is from the day they first arrived in the land of the free. Both Odiseas and Ippo looked dapper and cute wearing suits and ties.

Moreover, he is a graduate of Hyde Park High School from where he even won 2x All Time Conference Linebacker.

The 25-year-old has two half-brothers, Marcus Russell and Gerald Russell. It looks like their mom got into a new relationship and gave birth to Marcus and Gerald.

Moreover, Ippo often used the term blood whenever he shares pictures with Odiseas. This further solidifies the fact that both Marcus and Gerald are their half-brothers.

Be that as it may, the four siblings share a deep affection for each other. All four of them share a lot of photos together on their respective social media handle.

Odiseas enrolled at the High School for Performing Arts in Manhattan.

Georgiadis started his career in acting after appearing in a host of commercials. He featured in advertisements for big companies like Apple iPod, Hamburger Helper, Subways, and Nickelodeon.

He then gained popularity after appearing in the singing reality show, The Voice. His participation in the show became the catalyst for his further success.

Take a look at his audition at the show!

Later on, he focused more on acting and got himself a role in Robert DeNiro‘s produced CBS show, NYC 22. His role was limited to only three episodes.

Odiseas got a huge opportunity after he was selected for the role of Murph in the Netflix movie, The Perfect Date. In the movie, he starred alongside Noah Centineo, Laura Marano, and Camila Mendes.

Since 2019, he has been working in the TV series, The Trinkets. He plays the role of Noah Simos.

Despite his growing acting career, Odiseas maintains his love for singing will always come first.

What is Odiseas Georgiadis Relationship Status?

As of 2022, Odiseas is not in a relationship with anyone. Even before, he never mentioned having a girlfriend.

Well, it seems he is not ready to be in a committed relationship with anyone just yet.

What is his net worth?

He stands at a height of 5ft 9inches.

Where does the actor live?

He resides in Brooklyn, New York.

His Hair and Eye Color