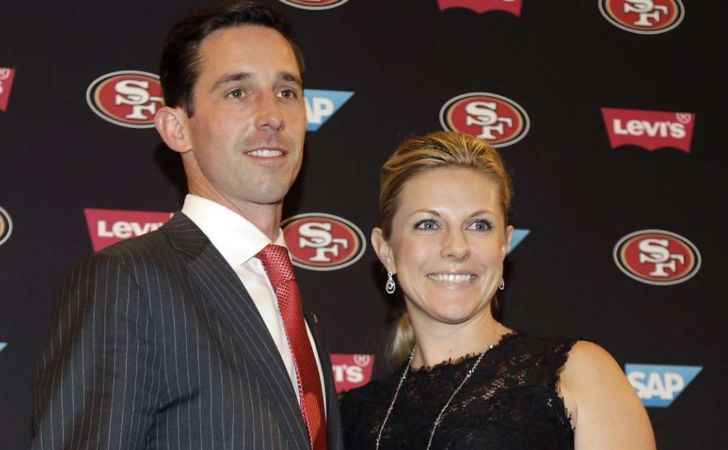 Kyle Shanahan, born Kyle Michael Shanahan, is one of the prominent figures in football. He is the head coach of the San Francisco 49ers of the National Football League. Likewise, he previously served as the offensive coordinator for the Atlanta Falcons, Cleveland Browns, among others. Well, with all the success and fame that he has achieved, even Kyle Shanahan’s wife & love life as a whole has become a subject of curiosity.

Well, the curiosity is pretty obvious. And today, we are here to help you find answers to all the questions about his love life. So, who is his wife? Does he any children from his marriage?

To all those who were unaware, Kyle Shanahan is a married man. And the interesting thing is that he is married to his highschool sweetheart Mandy Shanahan.

Kyle and his wife Mandy married on July 5, 2005, among all their close friends and family. Their wedding was a Roman Catholic ceremony. It has now been over 15 years since they married and they are going pretty well in their life.

But the most interesting thing is that his wife Mandy and Kyle were in a relationship in their high school days. The couple in fact dated for a while before breaking up just to reunite later on.

Kyle And Mandy Dated In High School But Had Broken Up

The now-husband and wife Kyle and Mandy met for the first time back in their high school days at Cherry Creek High School in Colorado. A year senior to Mandy, the duo began dating the summer after Mandy graduated.

However, things changed after Mandy’s mom Nancy O’Donnell, a healthy eight-grade teacher, was diagnosed with Stage 4 gall-bladder cancer. It was during this time that Kyle and Mandy reconnected and he helped her every possible way. In fact, Kyle wrote letters to her mom and flew back to her place every weekend to spend some time.

Unfortunately, Mandy’s mom passed away three months after the diagnosis on Jan. 31, 2002, but the two became close friends back again.

Talking about the same, Mandy stated,

He completely stunned me, Kyle, hands down, got me through that. After going through that with him, I couldn’t imagine being with anyone else. What was so alarming to me, being that young and going through something that devastating, I realized it’s not going to be the last sad thing that I go through.

Similarly, the football coach also spoke about the phase in life that reunited him with the love of life and how he fell in love again with her. Kyle said,

There are very few times in life you get to see someone for who they genuinely are, Mandy going through that — it was as bad as anything you could go through — it showed me who she was. There was no B.S. to her. I saw who she was. And that was the person I fell in love with.

Further, Kyle, who married at 26, also revealed that he had not planned to tie the knot at that age, but eventually took the decision because he had found the right person.  He said,

I never planned on getting married at a young age, But then I understood. ‘OK, you don’t necessarily get to pick when you get married. You get married when you find the right person.’ And I found her. So I changed my plans.

Shanahan Has Three Children With His Wife

It has been over 15 years since Kyle and his spouse Mandy, born Amanda O’Donnell, walked down the aisle. And over the years, the couple has welcomed three kids from their marital relationship.

They welcomed their first baby, a daughter Stella in 2008. Their second child Carter was born in 2010, whereas their third kid Lexi was born in 2013.

The parents and kids share a great relationship. Moreover, they are often seen spending time together on vacation and having good times.

He Named His Son Carter After His Favorite Rapper Lil Wayne

Not many know, but Kyle named his Carter for a reason. If the former football quarterback Chris Simms is to be believed, Kyle’s son name is inspired by the rapper Lil Wayne’s birth name Dwayne Michael Carter Jr.

In a podcast with Bleacher Report, Chris stated that Kyle was obsessed with Lil Wayne and that he was his favorite rapper. He said,

He was obsessed with Lil Wayne my early years in the NFL, Kyle’s one of those guys, if you’re hanging and we’re drinking some beers or whatever, he’s got to control the music. And he has A.D.D., so we can never actually listen to a full song.

Anyway, Kyle’s got a good choice of name.