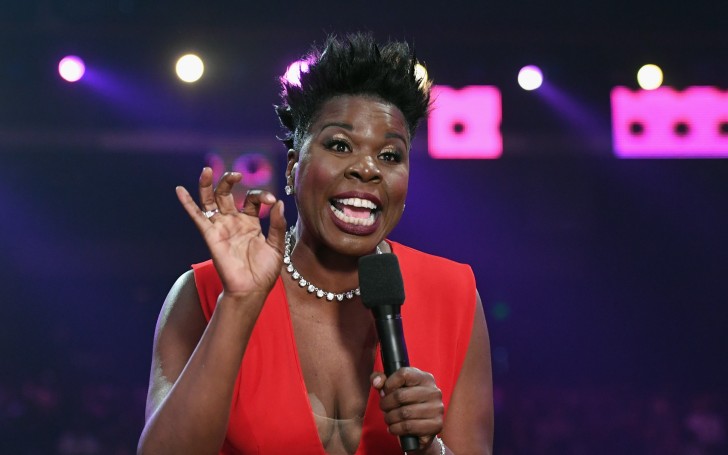 Leslie Jones is one of the famous comedians out there. Hailing from Memphis, the comedian has made our lives better thanks to her sense of humor. But does the person who makes us all laugh have someone who also makes her feel special.

Time and time again we’ve all heard rumors regarding her dating life. Who is Leslie Jones’ partner? This is probably one of the most asked questions. In addition, fans are also curious to know if she ever married in the past or not.

Today we’re going to answer all of your questions regarding Leslie Jone’s dating life. Let’s go!

Who is Leslie Jones’ partner? Is she dating a comedian?

As of 2021, she doesn’t have a partner. The beautiful comedian is living a single life without any worries. However, there’s a rumor going on amongst her fans pertaining to her dating life.

According to her eagle-eyed fans, she is reportedly dating fellow comedian, Mark Curry. For those of you who hadn’t heard the name, Mark is a famous comedian. He is famous for his role as Mark Cooper in the series, Hangin’ with Mr. Cooper.

But before you start gossiping, let us tell you how the rumor started then you can decide for yourself. So in April of 2021, Leslie had made an Instagram post wherein she talked about leaving the whole dating scene. It was in this post where Mark commented, “Get at me Before you quit.”

As much as we’d love for the two of them to become a couple, we can’t say anything right now.

Leslie shocked everyone when she said she is done with dating

In April 2021, she caused quite a stir on the internet after she posted something on her Instagram account.

In a written post, Leslie said she is going to giving up on dating. Moreover, at the end of the post, she added #maybeicanbuildone. The hashtag indirectly says she is so fed up with men that she is going to build her own partner.

Apart from that, the main highlight of this cryptic post was the quote, ‘I can do bad all by myself.’ Looks like Leslie had a bad run-in with someone who she thought was the one.

But wait, there’s more. This wasn’t the only time Jones shared cryptic messages regarding relationships. Just a few days before the above post, she shared something about ghosting in a relationship.

The SNL star called out those people who ghost and called them cowards. See the post!

To be honest, no one likes a person who ghosts them. It is one of the worst things you can do to a person. From the above two posts, it is clear Leslie experienced a major setback in her private life.

Leslie retracted from her stance on dating

Just when we thought Leslie Jones was really going to give up on finding a partner, she turned everything around. A few days after her Instagram posts, she gave her fans a positive outlook.

In a new post, she did a u-turn on us and mentioned something about being wrong. We’re guessing she might’ve jumped the gun way too quickly only to find out that it wasn’t what she thought.

What is the key to Leslie Jones’s heart?

When you’re a comedian yourself, one would think that sense of humor will be the last thing you’d want in a partner, after all, one jokester is more than enough. Nonetheless, Leslie here doesn’t think so. Despite having the ability to kill people with her sense of humor, she too wants a funny guy. To be more specific she wants a goofy guy.

During her appearance in the Conan show, when asked what kind of guy she likes the most, she said, “I like a dude that makes me laugh, and it’s not hard to make me laugh – it really isn’t – because I like the goofiest things. I love goofy men!”

You’d think being a comedian herself, a sense of humor in a guy would be the last thing in her mind. Well, think again!

Leslie Jones once had a rumored boyfriend

In 2017, a rumor came out about a potential Leslie Jones’ partner. In June of 2017, Jones claimed she is keeping her relationship and the identity of her beau on the down-low. Back then, she said,

“It’s a secret, so I don’t want everybody bothering him, you know what I’m saying? I don’t want to sit on television and be like, ‘Oh, the type of man I’m looking for …’ and then I’ll talk to him and he’ll be like, ‘Yeah, I heard you was looking for this type of dude.’ Don’t get me in trouble!”

As soon as word got out of Leslie’s secret relationship, everyone started asking questions about her relationship. However, all the loose talks soon came to an abrupt end when Leslie herself clarified her relationship status.

In the micro-blogging site Twitter, she wrote,  “Just so everyone knows. There was never a secret boyfriend. I have terrible luck with men. Real talk. They do not like me lol!! (sic)”