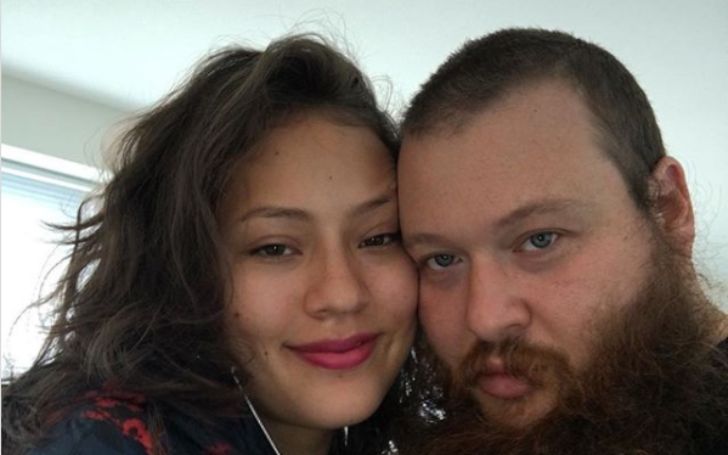 If there’s any rapper who has literally zero haters then surely its Action Bronson. Aside from his rap career, the New York native became a fan favorite after he starred in the show, Fuck, That’s Delicious.

The multi-talented star is also doing pretty fantastic in his personal life as well. He has recently become a father for the third time but with a new girlfriend. His fans are asking if he has decided to marry his girlfriend yet?

Moreover, there are a lot of questions surrounding the rapper, who is Action Bronson’s wife? how many kids does he have? Today we’re going to answer all of these burning questions.

Who is Action Bronson’s wife? If not then, is he dating a girlfriend?

No, Action is not married, thus he doesn’t have a wife. Moreover, there are no reports of him being secretly married to anyone. On the other hand, he is in a happy relationship with his girlfriend of many years, Valeria.

Now the exact date as to when the couple started going out isn’t known, he first shared the picture of his current gf in 2015.  In the photo, the rapper was seen embracing his girlfriend while she smiled.

Regardless, that was one of the few photos Action shared with his partner. Since then there are not a whole of pictures of his gf on his social media handles.

Now talking about his girlfriend Valeria, she is also a New York native. According to many sources, she belongs to Colombian ethnicity.

Moving towards her professional life, it is drastically different than her beau’s. She is a clinical social worker and a certified therapist & yoga instructor. Furthermore, she is a devout Hindu.

The Bronson household truly has a lot of diversity. The rapper’s parents are Muslim and Jews and his future wife is a Hindu.

Well, as we said above, Action has decided to spend the remainder of his life with Valeria. And as a token of love between the two, they recently welcomed their first child together on November 11th, 2019. After the arrival of his son, Action shared a picture on his Instagram account, holding his little bundle of joy.

A NEW CHAPTER OF LIFE.

Meanwhile, his lover added a photo, exactly one after their first kid came into this world. Valeria added a beautiful raw picture of herself as her baby is breastfeeding. She captured the true emotion of how a new mother after giving birth to a new life.

Now talking about their baby’s name, they named him Benicio. The name is of Spanish origin and literally translates to the Benevolent One. Apart from his name, their son has a mixed ethnic background. His dad belongs to the Albanian Muslim and Jewish backgrounds.

In addition, Action’s partner wanted to give birth in a way that pays homage to all the mothers out there, be it from the poor or rich nation. Thus, she opted for a natural birth, meaning no medical equipment or pain-relieving medication.

Initially, the rapper announced he is expecting his first kid with Valeria in October 2019 by sharing a picture of his woman showing her belly.

On the caption, he wrote, “OUR LOVE HAS SURVIVED MILLIONS OF LIFETIMES FOR US TO COME TOGETHER IN THIS ONE. MY INDIGENOUS QUEEN.”

Action Bronson once dated a West Indian Girlfriend: Shares two kids with her

A few years back, Action was once in a long-term relationship with a girl from Bronx, New York. The rapper never revealed the name of his ex-girlfriend, however, he has mentioned that she was black. Apparently, his baby momma’s father was from the West Indies, so she has a bit Indian in her.

Bronson was in a relationship with her for a long time, though he rarely mentioned about their affair in interviews. The 36-year-old TV presenter once talked about his now-former flame in an interview with HOT 97 radio station back in 2014.

With his former partner, he has two children, a daughter, Hannah, and one son, Elijah. His daugther is the eldest of the brood.

In the interview, he also talked a little about his kids and how they are slowly growing up. He mentioned that his daughter is now in a age where she says stuff like, ‘Daddy, you don’t understand me.’

Furthermore, his daughter also complaints about how his dad can easily bond with her little brother because he is a guy. Kids certainly grew up fast!

Bronson has also added his kid’s name on one of his rap songs, 5 Minutes Beats 1 Take Raps.

It wouldn’t be an understatement to say that Bronson is a big tattoo freak. From head to toe, our man is covered in loads and loads of tats. And there are wide varieties of tattoos, from tribal to a pajama-wearing wolf to our favorite, Godzilla vs Barkley.

However, what really caught our attention is the tattoos he has got in his chest and belly. Right across the bat, he has etched both of his kid, Hannah and Elijah’s name on the middle & right side of his chest.

Apart from their name, he has literally tattoed his girlfriend Valeria on the right side of his belly. In the tattoo, she is holding their beautiful dog, Coco.

When the interviewer from GQ asked about how he feels about the urban legend curse that you shouldn’t inscribe your girlfriend’s name on your body, Action said,

Safe to say, our man is deeply in love with his girlfriend and we would we wish he turns her into his spouse soon.