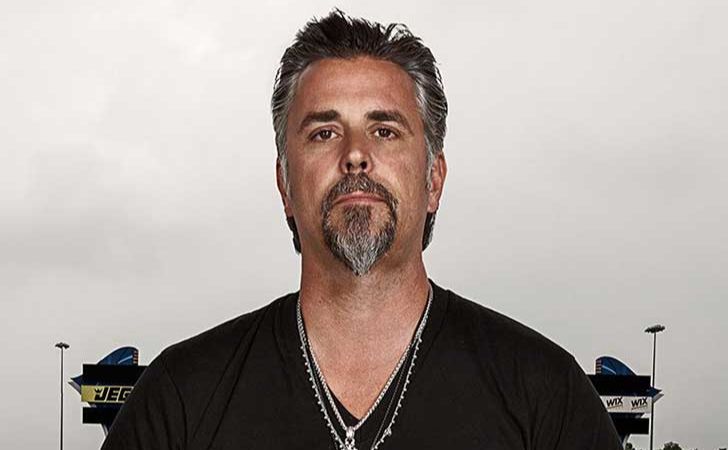 A successful professional doesn’t necessarily equate to a successful personal life. Similarly, Fast N’ Loud star Richard Rawlings has had a few failed marriages in his belt, despite his famous career.

But it looks like his current relationship might just go all the way. Richard is happily engaged to his girlfriend and if they marry, this will be his fourth marriage.

Today let’s take a look at his interesting romantic life and find out about Richard Rawlings’ ex-wife, marriage, and his engagement with a new girlfriend.

It was around the early 90s when Richard decided it was time he ties himself into a marital relationship. He exchanged vows with his girlfriend of the time, Karen K Grames on November 18th, 1993.

Back then, Richard was doing odd jobs to sustain his passion for cars. His now ex-wife supported Richard in many ways, however, their marriage couldn’t last as they’d hoped it to be.

Consequently, after a mere 1-year into their marriage, they decided to go their separate ways. The divorce was finalized in 1994. The former flames don’t share any kids between them.

Following his divorce from his first wife, Richard didn’t have a long dating affair with anyone. Then in the year 1999, his life took a sharp upward turn, both professionally and romantically. He started a printing and advertising business and married his second wife, Suzanne Marie Mergele on August 7th, 1999.

The intimate wedding ceremony took place in Las Vegas, Nevada with only closest friends and family in attendance.

Upon the arrival of Suzanne, Richard’s life changed. He started Gas Monkey Garage in Dallas which eventually featured in the Discovery Channel series, Fast N’ Loud. It wouldn’t be an understatement to say that Suzanne was his lucky charm.

That being said, not all good things have a happy ending and similar was the case for Richard and his wife Suzanne. The Fast N’ Loud’s star second nuptials also ended in divorce after ten years in 2009.

But wait, there’s a catch!

Six years after his divorce from Suzanne, love found its way back. The former flames reignited their love for one another and wedded once again. They said ‘I do’s in August 2015 and this time around, the nuptials took place in Cabo, Mexico.

They say the third time is the charm and likewise, Richard was believing that as well. Sadly, his second marriage with Suzanne also ended in a divorce. TMZ was the first to report about their tragic split.

Regardless of their differences, the ex-wife and husband still remain good friends.

Divorce settlement between Richard and Suzanne

Richard finalized his divorce with Suzanne in May of 2019. According to the documents, the settlement allows Suzanne to actively use her bank accounts which she had while being married to Richard.

In addition, she also took home the 2019 Mercedez SL 450 roadster, though payment of $80,000 was still due in the car. Moreover, she will also receive a sum of $300,000 from Richard which he will pay in two installments.

This easily takes Suzanne’s total net worth to the next level.

Did Richard and Suzanne welcome any kids? Has one step-son

Richard has revealed a lot about his personal life to the public but not much is known about his kids. Apparently, tabloids claim he never had any biological children, to begin with.

However, during his appearance on the Joe Rogan Show, he mentioned having kids. When Joe asked him about the inspiration behind Fast N’ Loud show, he talked about how his wife and kids wouldn’t watch the shows that were on the TV back then.

This leads to speculations that Richard might have a kid or maybe he was talking about a stepkid. Eventually, we discovered he has a stepson.

Richard is the step-father to Sinjin Venegas, Suzanne’s biological son from her previous relationship. In addition, he works with his step-father at the Gas Monkey Garage.

His mom and step-father Richard got married when he was three so it is safe to say Richard took him under his wings. In an interview, Richard talked about giving him a job at the garage.

Richard doesn’t have any biological kids of his own, at least not for now. Despite Richard and Sinjin’s relationship, they are quite cordial with each other, like a real father and son. Who knows, maybe he is grooming his stepson so he could take over the business someday.

After three failed marriages in total, anyone would become hopeless but not Richard. The TV personality, after settling his divorce with Suzanne, started dating Katrina Deason.

Richard shared the first photo with Katrina in June 2019. It can be said they might’ve started dating around the same time.

After dating for a while, Richard and Katrina got engaged. Rawlings proposed to her during their romantic getaway in Mexico. Well, get ready to see marriage number four!

Besides, before getting engaged to Richard, Katrina was married to Texas-based billionaire, Darwin Deason. After her engagement, she even changed her surname from Deason to Rawlings.