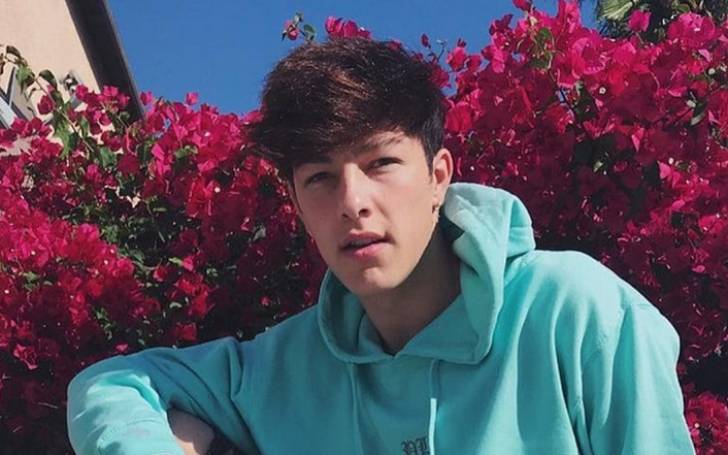 Aside from his profession, the social media sensation’s personal life has been an intriguing subject. With several queries of Tayler Holder’s girlfriend making rounds on the internet, sources report that Holder dated model Sommer Ray. Let’s find out whether the two are really in a relationship or it just speculation.

Rumors of an affair between Tayler and his alleged girlfriend Sommer Ray started after both of them featured in TikTok together. Tayler then further fueled the fire after he made some flirtatious remarks towards Sommer. On several occasions, the social media star asked her on a date.

However, in real life, the rumored couple never went out on any dates, whatsoever. Despite all the speculations, nothing has been confirmed by either Holder or Sommer.

Bryce Hall is close friends with Tayler. It was him who incited the rumors that Holder and Sommer Ray are indeed dating. Fans were already convinced something is going on between the two and Hall kinda took it up a notch.

Adding to the rumor mill, Hall gave a little more hint about their reported romance in the video titled “Tayler Holder And Sommer Ray DATING *CONFIRMED*” posted on 7th June 2020.

Bryce mentions in the video that Tayler and Sommer are definitely seeing each other. He stated,

“I wish I could tell you the answer. It looks like they are. They’re definitely feeling all up on each other’s faces and stuff.”

He continued, “definitely, maybe, kissing. I will say they probably have kissed.”

However, Hall also added “shouldn’t take [his] word for it”

Neither Holder nor his reported girlfriend Ray confirmed the rumors.

Tayler and Sommer once Unfollowed Each Other On Social Media

As per Dexerto, Tayler, and Ray’s once unfollowed each other on Instagram. Sommer even deleted every TikTok videos they made together.

The two previously posted several clips of themselves giving each other pecks on the cheek.

Amid their apparent breakup rumors, the two again made their joint appearance, leading fans to believe they are back together. The Hollywood Fix caught them together in Beverly Hills. When asked if they are coupling or not, Holder told, “We’re just friends man” while Ray said it just “friendship goals”.

Furthermore, on 12th June, the TikToker posted a photo with Sommer on Insta and captioned it, “She’s kinda cool”.

On one hand, it looks like they are just buddies, and on the other, their frequent flirty gestures said otherwise.

Tayler Holder once dated Kaylyn Slevin. The couple officially started dating in early May 2019. His ex-girlfriend is an actress and a social media star.

On 5th May 2019, Tayler uploaded a video on his channel titled ‘ITS OFFICIAL!‘, confirming his relationship with Slevin. He proposed to her on the video in front of their several friends. The proposal took Kaylyn by surprise as she never expected it.

Nonetheless, they went their separate ways after a few months. Tayler confirmed his breakup with Slevin on a video titled ‘we broke up‘ on 22nd August 2019.

Holder said their split was amicable. At the moment, Kaylyn is apparently dating footballer, Mycah Pittman.

Additionally, Holder was once also rumored to be in a relationship with another social media star, Kelianne Stankus.

Who is Tayler Holder Girlfriend in 2021?

The veteran social media personality is not dating anyone as of 2021. Back then, Holder was in a relationship with the budding social media icon Charly Jordan. The former flames reportedly began dating back in late 2020. However, their relationship didn’t last long and they announced they broke up in their YouTube video titled “Why we broke up…“, uploaded on March 29, 2021.

Sommer Ray Relationship Status in 2020: Who is Her Boyfriend?