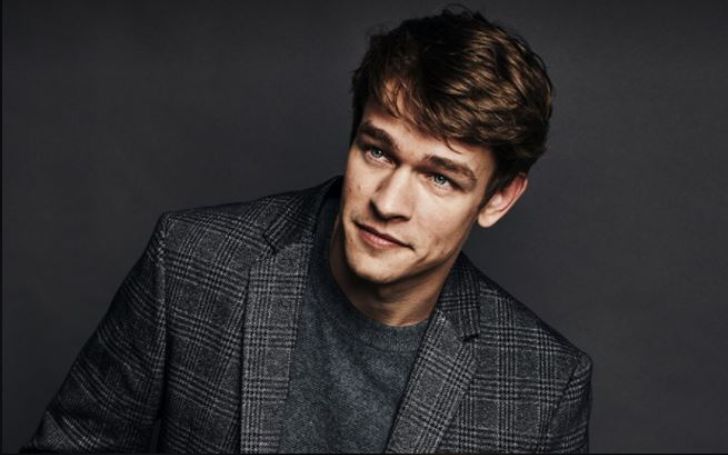 The experience also brought him working alongside an ensemble including Sarah Grey, Katharine Isabelle, Adam DiMarco, Loriza Tronco, and others. Elms who is also a model has additionally appeared in other shows like Timeless (2016), Project Blue Book (2019), and Motherland Fort Salem (2020).

The Canadian actor has been trying his luck and throwing his hat in the ring in the film industry over the past few years. And the celebrity himself admits it has been a fun and rewarding journey, though, an uphill battle most of the time. He claims the acting job as such a treat for which he’s worked so hard and waited so long. Know what more he has to say about his profession and also read further about his early life, some facts about his girlfriend, and more.

Thomas Elmes Childhood; The Actor Admits He Was A Bit Of A Clown

Although Thomas Elms is yet to share his birth date, he is widely presumed to have been born in 1996. Also while not much about his family is known, Elms once said he has a sister, Lauren Elms who is a year younger than him. And the actor used to play with toys and imagine characters, kingdoms, and stories with her.

He also revealed his parents having had a huge yard and a beautiful garden. The 25-year-old Elms though doesn’t have a brother. His grandfather, Nicholas used to sing in a choir.

Thomas once revealed he used to be a class clown throughout his elementary and high school years.

I became a class clown, mostly because I wanted the attention and I wasn’t quite sure of any other way to get it, other than making people laugh or humiliating myself. I’ve always taken a strong sense of validation and pleasure in making other people feel things,

said the Canadian actor in July 2020 to Pop Culturalist. He though added it may not have been the most healthy developmental stage in his life. In high school, he performed in a musical production of Bye Bye Birdie.

The young actor took his acting training from Railtown Studios drama school in Vancouver, Canada. Elms in an interview disclosed, for the college, he studied philosophy but quit halfway in part to his realization that writing papers and talking about philosophy weren’t what he wanted to do with the rest of his life.

He also auditioned for the three-year acting conservatory program at the University of British Columbia. Thomas credits his acting career to his theater phase where he did Shakespeare and Chekhov, in addition to writing and collaborating on a feature film.

The six-foot-tall, Elms once admitted to having a fascination with ancient history, magic, and monsters. And apparently, these were also the reasons why he decided to play Hamish in The Order.

Thomas Elms Discovery Of His Passion For Acting

When Pop Culturalists asked how he came to do acting as a career, Thomas said,

That’s a big question. From an early age, I’ve always had a very strong sense of imagination and fantasy. This dates back to my childhood. My family had a huge yard and a beautiful garden.

He further said that it was him playing with toys and imagining characters, kingdoms, and stories with his sisters that inspired him to pursue acting. Elms added his urge to become a class clown and his attention-seeking behaviors were also responsible for pushing him to be an actor.

Thomas, however, said the pinnacle moment of decision-making for him was the time when he saw a musical production of Bye Bye Birdie. Talking about the very moment, the Vancouver native in told,

They had fifty people, all in costume, doing this brilliant, incredible musical number. I remember thinking, “Wow, that’s drama, huh?” I wondered about that, and it became a place for me to go, get some attention, act silly, and get an A for it, which I thought was unbelievable. It led me down a really interesting path.

Elms on the other hand also revealed he had often considered himself a bit too cool for theater and drama and had always wanted to become a philosopher and an intellectual. He apparently wanted to talk about complicated ideas. But as he grew up, drama became a place where he said he could feel safe to express himself.

Thomas Other Movies And Series

Elms’ first acting credit was in the 2015 short movie Their Son Ryan. After that, he played Josh Senior in one episode of the series Aftermath. He then appeared as Man At Bar in another series Timeless. Elms’ got his film debut in the 2018 movie I Still See You as Brian.

It was a supernatural feature film that also starred Richard Harmon and Bella Thorne; the movie had a director, Scott Speer. It was Elms’ first real big role in a feature movie. Thomas was a supporting character, the antagonist.

Some other series where he has had more than one appearance include Motherland: Fort Salem and Skymed; the latter – currently under the pre-production phase.

In The Order, Elms plays a college freshman Hamish Duke, who joins a fabled secret society, The Order, where he encounters a world of magic, monsters, and intrigue. The Netflix series is his first time being a series regular.

Elms though originally had auditioned for Jack, Morton, the protagonist.

Does Thomas Elms Have A Girlfriend?

Telling from his now inactive Facebook handle or otherwise fairly live Instagram, Elms did seem to have a girlfriend at least in the past. He presumably was in a relationship with Sophie Graham, a British singer residing in Vancouver, Canada.

The first time Thomas sort of went public with his and Graham’s love was in Feb 2018 on the month of Valentine’s day. While he didn’t say any such words as a girlfriend or so forth, he did throw out some lines that pretty much put to the paper – Sophie was something much more than just a random friend to the Project Blue Book alum.

In all my life, I have never met anyone with as bright a soul as this woman. She is so selflessly compassionate, courageous, and sweet. I sometimes wonder how you and I can even be from the same planet. Happy Valentine’s day baby. X

However, as of recent, Elms hasn’t shared much from his reported partner, Sophie nor has he appeared with any new lady on his socials. While it seems likely Graham and the Canadian star are done for quite a while ago, Thomas is yet to address the issue himself.

Other Facts About Thomas Elms