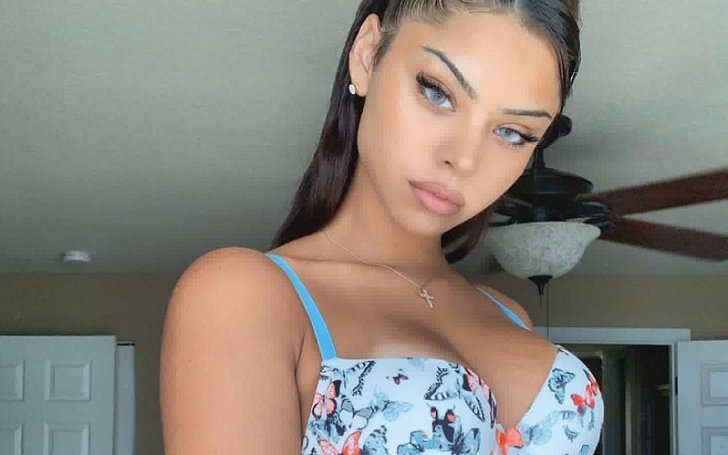 Tiana Musarra, 23, is one of the emerging social media stars with over 1m fan following on Instagram as of 2021. She is also popular on YouTube and runs an eponymous YouTube channel. Her channel has over 457k subscribers.

Besides, the hot social media influencer grabbed early attention on Insta after her dancing video from Austin Mahone‘s party went viral. Later on, Tiana took advantage of the viral moment and grew up her fan base.

Meanwhile, there are several sources that report the Instagrammer has undergone cosmetic surgery. Is it true?

To know more about her family, boyfriend, and other facts you are looking for, read the full article.

Who is Tiana Musarra? About Her Parents

Tiana was born on 27th June 1997, in New York City, New York. Some tabloids suggest that Tiana’s father died at a young age. But, when we visited her mother, Claudia Musarra‘s Instagram page it turned to be false as Claudia is happily married to Anthony Musarra since October 1993. He is a retired police officer.

happy mothers day @claudia_musarra ill always need the light & love you give to all of us, i love you 💜

Tiana’s mother Claudia also posted a beautiful photo with her hubby in the honor of their 24th anniversary on 30th October 2017. She mentioned in the photo that the two are blessed with two children.

Here is the caption,

“24 Years ago today ! Thank you my love for always loving me,and giving me 2 amazing kids. I feel so blessed to have you in my life. I thank God for that everyday. “There are never enough I love you’s.”

Anthony and Claudia’s relationship that has spanned over 26-year is still looking pretty strong.

Tiana Musarra Has a Brother

The influencer has a brother named Antonio Musarra who is a great basketball fan. The Musarra siblings share a deep bond with each other.

They were also pretty much close to their late grandfather. Musarra posted a heartfelt picture after his demise in 2018.

i love you grandpa. i’ll miss ur long hugs tht fixed any problem i ever was having… till we meet again 👼🏽🙏🏽💜

How Old is Tiana?

The Instagrammer is a tattoo lover. On 30th July 2019, Musarra revealed her second tattoo via her Insta. She has inked some Japanese letters on her left hand’s index finger.

On 23rd November 2019, Musarra also uploaded a video of her new tattoo on her YouTube channel titled “I got another tattoo”.

In the same video, she also disclosed she has another tat, but the information about her first art is still a little unclear.

Did Tiana Musarra Had Plastic Surgery?

Several outlets suggest Tiana underwent face surgery. In a post shared by (@exposingcelebsurgery) on its Instagram page on 4th May 2014, Musarra looked a little different. Although most of her fans have claimed that Tiana looked different before surgery, Musarra has yet to admit the speculations.

There are several conflicting comments on the post too. Apparently, there is no confirmation on whether the social media star ever underwent cosmetic surgery or not.

What is Tiana Musarra Net Worth?

Musarra has earned quite a good fortune from her social media career. At the moment, her net worth stands at $300,000.

According to Socialblade, Musarra makes between $9.6k – $152.8k a year from her YouTube Channel. She has 457k subscribers on her self-titled channel. Similarly, the social media star obviously makes money from Instagram.

Is Tiana Musarra Dating? Who is Her Boyfriend in 2021?

Tiana is not dating anyone as of now. Her love life has been a little complicated over the past few years. Unlike many, Mussarra has kept all the details of her personal life away from the spotlight.

However, Musarra has had boyfriends in the past.

The hot bombshell was once in a relationship with Jack Gilinsky, a musical artist. The former ultra-secret couple kept their romance under the radar throughout their relationship.

The two were seen together in Miami Beach, Florida back in late 2018. In a photo shared by Jack & Jack Brasil on Twitter, they were seen enjoying and frolicking at the beach. Despite their intimate connection, the couple split up sometimes later.

Her former boyfriend Jack is renowned as the former boyfriend of singer, Madison Beer. In early 2020, it was reported that Jack was back together with his on-off girlfriend. But it doesn’t seem to be the case though.

Besides, Musarra was also rumored to be dating Darryl Granberry Jr. (known as DDG). But neither Tiana nor her rumored beau DDG confirmed the relationship.

Back in November 2019, a video of Tiana dancing at Mahone’s house party became viral on Reddit. She had appeared in several of Austin Mahone‘s concerts.

The clip was captured from the musical artist Bobby Biscayne‘s Instagram story.

As per reports, Musarra joined Austin’s concert after being chosen from the crowd on March 3, 2014