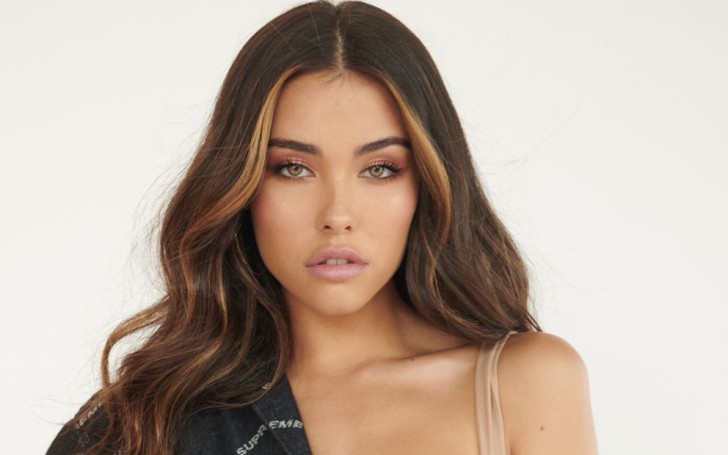 The singing sensation Madison Beer has been on the dating scene for a while now. With more than one relationship in the past, the 21-year-old experienced it all, from fights to calling your partner out for infidelity.

There are many questions regarding who is Madison Beer’s boyfriend in 2021 and is she in a relationship? Well, in the past, she did have reconciled with one of her exes but what about now?

Who is she dating now? Find out here!

Who Is Madison Beer Dating in 2021? Her new “rumored” boyfriend is a Hype House Member

As of 2021, Madison is in a relationship with TikTok star, Nick Austin. After months of speculation, the pair finally made their relationship official in March 2021. It was Nick who put the stamp on it by sharing a cute picture of the two in his Instagram account.

Initially, the singer made headlines, leading fans to believe her possible new romance with TikTok star Nick Austin when they were caught sitting close together during their night out at Saddle Ranch with their friends on 23rd August 2020.

Furthermore, they appeared again, driving a luxury sports car Ferrari together for a meal at IL Pastaio, Beverly Hills, on August 27. Subsequently, a few months later in December 2020, the rumored lovebirds appeared together yet again. Madison who rocked a black zip-up hoodie and jogging bottoms was seen getting in a car with her rumored bf.

Although they are yet to confirm anything about their relationship, their frequent outings say a lot about their bond. It is more than plausible that they are dating.

In 2020, the singer was spotted with her on-and-off beau, Jack Gilinsky. Now if Madison and Jack were total strangers meeting each other for the first time then we wouldn’t have said they are dating, but we are bound to speculate when two exes meet up. What’s more, the former flames even shared an intimate moment. They share an intimate kiss.

There were speculations the lovebirds might have straightened out their differences and got back together. To be honest, celebrities these days are quite unpredictable when it comes to their relationships. The same can be said about Madison.

Initially, Madison and her boyfriend Jack were first spotted in January of 2020. At the time, they were on a brunch date, eating out with a bunch of friends. What’s more, the paparazzi also captured them kissing inside her car.

Then on March 15, Madison and Jack went for a shopping spree in Los Angeles after the Coronavirus lockdown came. In the photos, the pair were shopping together as they stock up amid the pandemic.

In addition, back in early August 2019, they were spotted kissing at Toast in West Hollywood. But now that she is seen closely with Nick, we’re sure she has nothing to do with Jack anymore.

The couple was dating on and off since 2015.

It’s not a surprising fact the internet wanted to see David Dobrik and Madison together ever since their Instagram and TikTok post together.

It was at Beer’s 21st Birthday Bash when they appeared together for the first time.

From the event, the YouTuber shared a picture wherein he was tightly embracing the birthday girl. At once, many of their fans started shipping them and said, ‘Ask her out already.’

Moreover, David also posted a TikTok video with Madison in which he is carrying her in his arms like you’d carry a child or a puppy.

In addition, Dobrik jestingly even asked her out during her appearance in Views with David Dobrik with Jason Nash. Madison willingly nodded!

Nevertheless, the couple debunked all the rumors and said they are just friends and not couples.

David Dobrik Denied all Claims of Romance with Madison Beer

In an online interview with Entertainment Tonight, David gave his insight regarding the rumor of his relationship with Beer.

He gave a straightforward answer and mentioned he is not dating anyone at the moment.

So, there you have it! For now, the Madison-David ship should just stay down.

Madison Beer Past Affairs: From Zack Bia to Brooklyn Beckham

Talking about her past affairs, Madison previously dated Zack Bia. They started dating in late 2017 until 2019. Initially, their relationship was sailing smoothly. But later on, it turned ugly when Madison confronted him for infidelity.

The incident happened outside a night club and their video went viral. The singer broke up with him in late 2019.

Zack works as a promotor at the H Wood Group. The group owns the majority of hot nightclubs/ restaurants in LA.

Apart from him, she also had an affair with David Beckham‘s son, Brooklyn. It was in early 2017 when the love birds dated. Their affair was confirmed after they attended various events as a couple.

However, their relationship ended after Madison said she can’t do long-distance.

Madison Beer is Bisexual: Has she ever dated a Girlfriend?

We’re sure most of you might already know about Madison’s sexuality. If not, then let us tell you, she is bisexual.

Robert Beer’s daughter came out as a bisexual back in 2016 when she hinted at liking females along with males. Moreover, just recently, she gave answers in regards to her sexuality.

In a live q&a with her fans, when asked if she is bi? Madison nodded and said, yes. You can watch the video down below!

Now after her revelation, we’re all curious if she ever dated a girl. Till now, the answer remains behind closed doors, although we can surely see her go out with a girlfriend in the future.