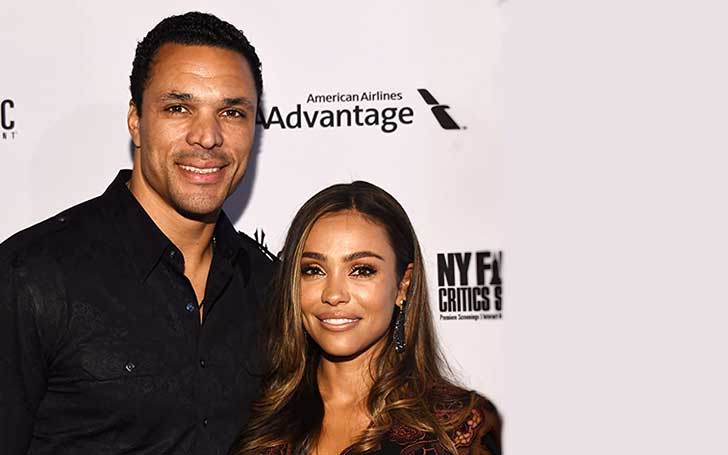 Former NFL star and sports analyst Tony Gonzalez is famous for his relationships besides for being an athlete. Tony’s previous relationship with Lauren Sanchez, who is Jeff Bezos’ current girlfriend, kept him glued to the spotlight for a long time.

People who follow him on social media might be aware of the fact that the former footballer lives happily with his partner and children. However, people who just know him as a footballer might wonder who he is married to. So, let’s find out who Tony Gonzalez’s wife is. And let’s also take a deeper dive into their married life.

Tony Gonzalez Wife – How is his Married Life Going?

The 44-year-old former NFL player, Tony Gonzalez is in a relationship with October Gonzalez for a long time. The pair got married over a decade ago, however, they just legalized their marriage in 2019. Tony lives in Huntington, California with his wife October and his children.

Tony and October got married in a commitment ceremony on July 20, 2007. They gave birth to two children following their marriage. They welcomed their first kid, a daughter, Malia Gonzalez shortly after their marriage. Around two years later, they welcomed their second child, a son, River Gonzalez. Besides the married couple has adopted a daughter named Sophia Gonzalez who turned five on 10 December 2019.

Everything from their First Meeting to First Dating

They met at a bar owned by Dennis Rodman where October was working as a waitress. Talking about their first meeting in Tony’s podcast, October said he was “kinda hiding in the back” when she saw him for the first time. She added that when she spoke to him there was an ease and comfort to talk to him and they immediately had a familiarity like they’d been together for years.

Meanwhile, Tony said that he asked her out on their first meeting which she denied by the way. He also asked her for her number, however, she didn’t give him her number instead she took his number. October said she was dating another man back then so she didn’t call Tony.

A year went by but the couple didn’t talk a second time even though Tony used to go to the restaurant and see her there. One night, their mutual friend named Doug called Tony up and said Tobie (October) was single. Tony said he was at a Hollywood club when Doug called him then he promptly headed for the club that was about an hour and 20 minutes drive with his friends.

As Tony arrived at the club, October was at a parking lot and was about to leave. Then they talked for around an hour before he asked her out. The pair started dating, however, Tony said they were dating on and off for around three years.

Tony Was Smitten By October’s Singing

After around three years of an on and off dating, the couple finally got to the point when they started taking things seriously. In his podcast, Tony revealed he fell for his wife after hearing her singing at a bar. He unfolded the incident as they went to a bar with one of October’s friends, Stephanie.

Then suddenly, October got up and started singing “Let’s Hear it for the Boy.” It was when Tony thought she would be the one for him. October added that a little while later, Tony called her up to live with him in Kansas for about 10 days. She went on to say that it was the first time they were together for so long.

One day, during October’s stay in Kansas, Tony told her he didn’t want her to leave. In response, she also said, “I know, I really don’t wanna go.” Then October officially shifted to Kansas and started living with Tony and the rest is the history.

Tony Suffered from Bell’s Palsy before They Married

In 2007, the former Kansas City Chiefs tight end suffered from a facial paralysis termed as Bell’s Palsy. Meanwhile, Tony was still battling the disease when he decided to propose to his then-girlfriend, October. In a conversation with Entertainment Tonight, Tony said that he got down to his knee while his face was paralyzed.

On the other side, October did the impression of how Tony said “I love you, will you marry me,” to her with a paralyzed face. Here is a video clip showing October’s impression of Tony. Have a look.

October revealed on her husband’s podcast, they got engaged, married, bought a house, and got pregnant with their first child in the same year 2007.