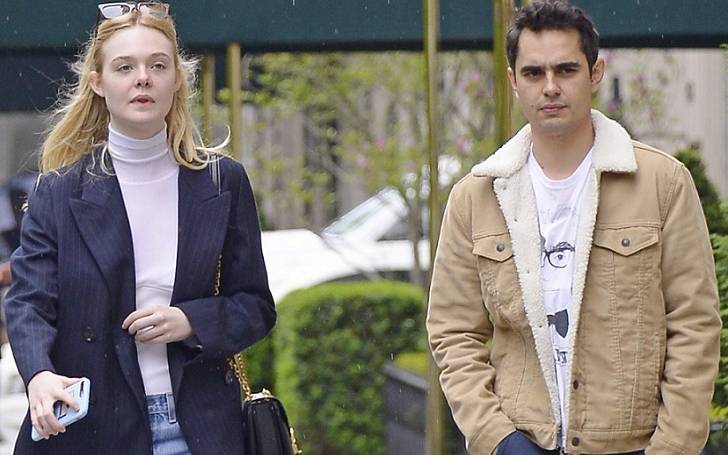 Actress Elle Fanning, 23, better known for a role in the Maleficent film series belongs to the same category. She is currently dating her director boyfriend Max Minghella. However, the celebrity couple likes to keep their smoldering romance away from the spotlight.

Fans are curious to know how long have they been dating? When did Elle and her boyfriend Max first meet? Today lets try to uncover all the questions regarding Fanning’s relationship with her partner.

Who is Elle Fanning’s Boyfriend in 2021?

Since, the last couple of years, Elle is happily in a relationship with Max Minghella, an actor, and director. The duo was first rumored to be dating in late 2018, though Elle often denied dating him.

But their recent appearances has made it clear that they are not just friends but girlfriend and boyfriend. For instance, just a few months back in April 2020, Elle and Max were spotted out and about in Los Angeles. Apparently, the love birds were out to pick up their pet dog.

Elle Fanning’s beau Max Minghella is an actor who has also built a highly successful career as a filmmaker. In 2018, Minghella worked with his then future-girlfriend Elle in a musical drama Teen Spirit.

Max currently portrays the main role of Nick Blaine in the web series The handmaid’s Tale.

When did Elle Meet Her future, Beau Max, for the First Time?

The duo first met during the shooting of Teen Spirit (2018) in early mid-2017. They have still been taciturn about their relationship and rarely share their post on their social media accounts.

While the two were filming Teen Spirit, Minghella posted the first picture of his bae Elle on his Instagram on 13th July 2017.

They Shoot Horses, Don’t They? #teenspiritmovie

The actress played Violet, a shy teenager while Max worked as a director and screenwriter on the project.

They Allegedly Began Dating in 2018

Due to the limited information, it is quite hard to figure out the precise date as to when did they actually started dating. But, some authorized sources reported the two have been in a romantic relationship sine 2018.

Their dating rumors first emerged when Elle and Handmaid’s Tale star Max Minghella were spotted together in London in August 2018.

But even after a series of public appearances, Fanning and Minghella still remain vigilant when it comes to their love life.

Back in April 2019, in an interview with Entertainment Magazine, the actress refused that the actress and Max are a couple. Instead, Elle praised his work and said they are close professional colleagues.

“I mean, we just really love working together. That was, like, very special, and he’s such a good friend,” Fanning said.

However, their relationship rumor further solidified when the duo attended the re-opening of Phoebe Waller-Bridge’s one-woman stage version of Fleabag at the English capital’s Wyndham Theater. They came at the event together back in August 2019.

In October of that year, when asked by Elle what she thought about the romance rumors with Max. She somehow diverted from the question and praised her boyfriend’s directorial work. Moreover, Super 8 actress also maintained how his work inspired her to try her hand on writing. She said, “It’s important to have ambition. I would love to write and direct something.”

Elle Fanning and Boyfriend Max Minghella Are Both Dog Lover

Both of them are dog persons. The actress has a puppy named Lewellen.

Minghella revealed his newly-born pooch via his Instagram on 24th March 2020. He previously took his puppy at a dog training facility in Sherman Oaks.

In April of 2020, the couple was spotted together in Los Angeles to pick up their dog from the training center.

Award-winning actress Elle once opened up about her ex-beau. In an interview with Marie Claire, the actress talked about her first love and heartbreak she experienced at the young age of 16. Elle stated that her teenage relationship with her then-boyfriend was quite tumultuous.

At that age, I was experiencing first love…not to get into it too much, but it was also…not the best…It was kind of a tumultuous relationship. Which can also be very romantic for young people as well

Everything’s so dramatic at that age, so intensified, when you’re young and still developing in a school setting, which is literally the harshest place in the world

But, Fanning never revealed further details about her now ex-bae.

Fanning is not pregnant. But rumors about her elder sister Dakota Fanning‘s pregnancy sparked back in November 2013. Speculation about Dakota being pregnant started when she played the role of Olivia, a pregnant woman in a 2015 drama Franny. In addition, Dakota also attended several high-profile programs wearing the prosthetic baby bump.

Who are Elle Fanning Parents? Relationship With Her Sister Dakota Fanning