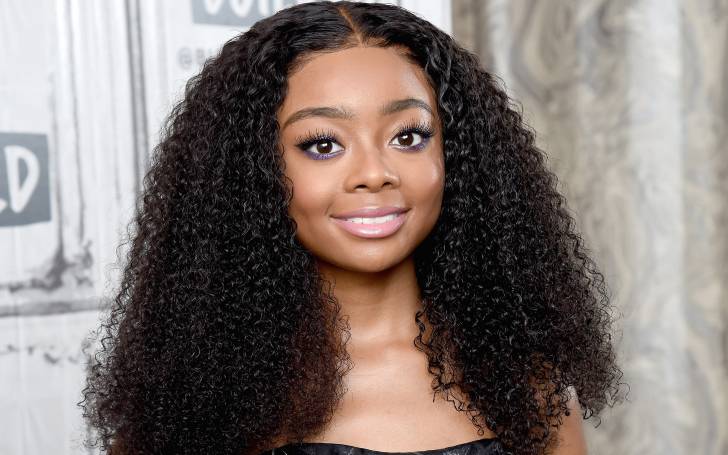 Jessie star Skai Jackson rarely talks about her dating life in public. The adorable actress has had a few link-ups in the past but she nor denied nor confirmed any of them.

What’s more, her feud with rapper, Bhad Bhabie created a lot of buzzes.

Besides, who is Skai Jackson’s boyfriend right now? Who is she dating? Here is everything you need to know about the teenage stars’ personal life, including a list of her boyfriends and current relationship status.

Skai is single as of 2021. She is not going out with anyone and there have been no rumors of any link up with a boyfriend.

It has been a few months since the actress was last associated with a partner. Even so, Skai is savoring her single life by spending time with her family and changing the world.

She might just be 18, but she is not your average teenager. From publishing her own book to encouraging youths, Skai definitely is an inspiration for many.

We’re sure it’ll take an exceptional man to impress this incredible human being. Regardless of her current relationship status, Skai mentioned back in December 2019 that she had a boyfriend.

Skai was on the news last year after rumors of her romance with Rapper Lil Keed came to the surface. It was Keed’s baby momma who revealed Skai and Keed have been seeing each other for a while.

The baby momma even called out Skai and gave her some really bad names. She alleged at the time, Skai and Keed were planning to keep their lovey-dovey behind closed doors and come out as a couple when she turns 18.

Skai Dm’ed her and contradicted everything the woman had said regarding her relationship with the rapper.

“But I don’t want him in that type of way? He asked my age and I told him….don’t see the problem. I’m not sure why you have a problem with me, as I’ve seen you comment on post before when I have no issue with you. No bad blood over here. Hope you have a good one.”

However, the baby momma revealed Skai is blatantly lying as she has seen all the messages between them. According to her, Jackson even called the rapper, ‘Daddy.’

Skai Ended it All by Revealing She Has a Boyfriend

Just when things started turning ugly, Skai divulged that these rumors lack substance and she has even moved on. We all know Skai rarely likes any drama, let alone this negativity and similarly, she told the baby momma.

The Bunk’d star declared she won’t entertain any more negativity and moreover, has moved on from all this.

“But trust me I don’t, I have a boyfriend now..just know I have no issue with you, and I don’t want any negative vibes because I just don’t like drama.”

There you go, Skai has a boyfriend which we never knew about. Who knows? Maybe she is hiding her secret boyfriend and happily dating this guy.

Be that as it may, we’re happy Skai moved on from all the negativity.

Skai Jackson Other Affairs: Did she date Rapper Kid Trunks?

So back in 2017, tabloids claimed the Disney star dated Rapper Kid Trunks. News of their affair first came to when Trunks shared a tweet in 2017, where he literally confessed his feelings for Skai.

These actions really point out the duo had definitely something going on between them. In addition, MTO News even stated in a 2018 article that they’ve been in a relationship for a year.

Kid Trunks Shared A Cryptic Message and Broke-up with Skai

Their affair came to a standstill when Kid Trunks reportedly dumped Jackson while he was in a live stream. According to the now-deleted video, Trunks lashed out at her and said,

We can probably say that by a little girl, he meant her.

On the other side of the spectrum, Skai never even once said anything about dating Kid Trunks.

It was earlier this year when Skai found herself in yet another controversy. This time with teenage rapper, Bhad Bhabie. Bhabie claimed Skai reportedly tried to hook up with her on and off boyfriend, NBA YoungBoy.

Amid all the drama, NBA, who has one son with ex-girlfriend, Jania Meshell, mentioned in Instagram stories that he is single.

Bhabie aka Danielle Bregoli added a series of posts all over social media, going as far as to say that she will kill her. After Bhabie called out Skai, she apparently blocked her on social media which agitated Bregoli even more.

As the incident turned rather ugly, Skai got a temporary restraining order against the rapper, E! News confirmed.

The order by the Superior Court of California, LA, stated Danielle has to remain 100 yards away from the actress. The court documents read, “The harassment has caused me to be fearful of leaving my house by myself, and lack of sleep.”

Despite the restraining order, Danielle seems unfazed as she argued about not apologizing to Skai.

In July 2019, it was reported Skai is romancing the social media personality, Curly Hair Jayden. News of the affair started when he posted a picture of the two.

What’s more, the duo had some intimate moments together. Jayden even used heart emoji in a video of the duo. The whole community was in shock after seeing their pictures.

Nonetheless, after some time, their affair fizzled out and there was no new sighting of the pair.