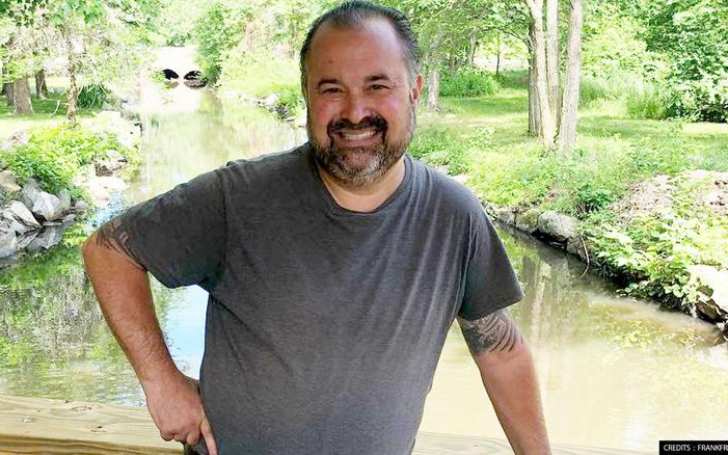 Frank Fritz is an American collector and TV personality. He is famous for his role in the HistoryTV18 series, American Pickers. He appeared in the show alongside Mike Wolfe.

Frank has, as of now, exited the show. His last appearance was in a March 2020 episode of the shows’ 21st season. His sudden disappearance from the show raised many questions but it was later revealed that he took a hiatus from the show due to his health concern.

There are many unanswered questions regarding Frank’s life and today we shall uncover all of them. Let us find out some untold truth regarding his life.

Born on October 11, 1965, in Davenport, Iowa, Frank is the only son between Susan Kay Zerbes and Bill Fritz. His parents never married and they separated soon after his birth. His biological father moved to Texas later on they never had any sort of relationship until Frank started appearing in the show.

Frank was then raised by his mom and his step-father, Richard Dick Zirbes, whom his mother married back in 1974.

His mother used to work in a construction company while his step-father was a tire salesman. Frank’s mother passed away at the age of 67 in December 2013.

Fritz spent the major portion of his childhood in Mound Street, Davenport.

He began Picking From a Young Age

Since his early childhood, Frank used to collect items. When he enrolled at the Sudlow Intermediate School in Davenport, his interest in collecting started and he used to collect stuff like rocks, beer cans, stamps, and coins.

Frank used to follow the train tracks from his home to the village of East Davenport where he would often find discarded items that were left of by hobos riding the railroad.

He always had a knack for finding treasure in a midst of discarded items and rightfully so, his skills, later on, led to his acclaimed role in the series American Picker. For him, what started out as a childhood activity turned into a full-time hobby.

Frank worked as a Fire Inspector

Many of us first found out about Frank from the show American Picker, however, the man had a different life before. He used to work as a fire inspector. During his time as an inspector, he covered the area of Des Moines to Cedar Falls.

Although he was working in a different profession at the time, his interest in collecting never died down. Even then, he was picking up firefighter and firehouse-related trinkets.

One day, Frank bought an item for $15 which he later sold for $475, making an instant jackpot. This incited a fire in him and Frank decided to do this for a living. Subsequently, he quit his job in 2002 and established a company called Frank’s Finds.

Talking about his life back then, Fritz said,

“I was in the position to be able to do it. A lot of people in this world are smarter, have more money, know more about stuff, but they haven’t chosen the direction or come to that crossroads in their life.”

Frank Fritz is a Motorbike Enthusiast

Frank loves motorcycles. Ever since he was young, he had a dream of collecting vintage motorcycles.

He has a big collection of motorbikes which he often showcases in various events like Daytona Bike Week, AIMExpo, the National Motorcycle Museum, and the KC Remodel + Garden Show.

His collections include but are not limited to Honda 750, Heinz 57 1954 Harley-Davidson Panhead motorcycle.

Around the time when Frank was in his late teens, he joined the Bettendorf High School. It was here that he first came across Mike Wolfe, who later became his co-star.

Back then Mike was more oriented towards collecting items such as old bicycles and discarded jack-o’ lanterns.

They remained close friends for years before eventually, their friendship turned into the dynamic duo that won over the hearts of many fans across the globe.

He joined American Pickers in 2010

The show made its debut on 18th, January 2010. Its premiere had 3.1 million viewers which made it the highest-rated debut show in the History network.

He joined the show alongside his high school friend Mike Wolfe and Danielle Colby, who runs the Antique Archaeology office.

Frank Left The Show In The Middle of 21st Season

After appearing in the show for a decade, Frank suddenly disappeared from the show. His last episode aired in March 2020, a few months before the finale of the 21st season.

At the time, neither Frank nor the network divulged any details regarding his exit. Because fans weren’t able to know what the reason was, they started speculating that it might be due to the Covid-19 pandemic or maybe his underlying health issue.

But all the rumors ended when Fritz gave an all-exclusive interview to The Sun and revealed what was really going on.

In his own words, Frank said,

I didn’t leave the show. I finished shooting and then I had a little back surgery and the pandemic came.”

The feud between Frank and Mike Wolfe

By now many of you might have definitely known about the battle between Frank and Mike. In an interview with the Sun, Frank lashed out at his former co-star Mike.

In response to Frank’s post regarding Fritz’s departure from the show, Frank said, “Mike’s statement was bulls***, somebody wrote it out for him.”

In addition, Frank also mentioned that he and Wolfe were never friends. According to him, while he was struggling after his back surgery Mike never even once checked on him.

Well, regardless of what might have transpired between the co-stars, one thing is for certain, Frank is officially out of the show and we will definitely miss his presence.

Frank Fritz was once engaged to be married

Frank is an extremely secretive person when it comes to his personal life. As of now, his current relationship status remains a big secret.

That being said, the man was once engaged to a woman named Diann Bankson. Initially, he started sharing pictures with his ex-fiancé in 2016.

The former flames used to live at Frank’s farmhouse in Iowa. Things were going peacefully between the two until everything fell apart.

In a court document obtained by The Sun, his fiancé Diann sued him for negligence. In the document which was filed in January 2020, Frank caused Diann to suffer from third-degree burns after fireworks exploded in their residence.

Furthermore, Diann also claimed Frank cheated on her. The incident happened back in November of 2018 when she found him in bed with another woman.