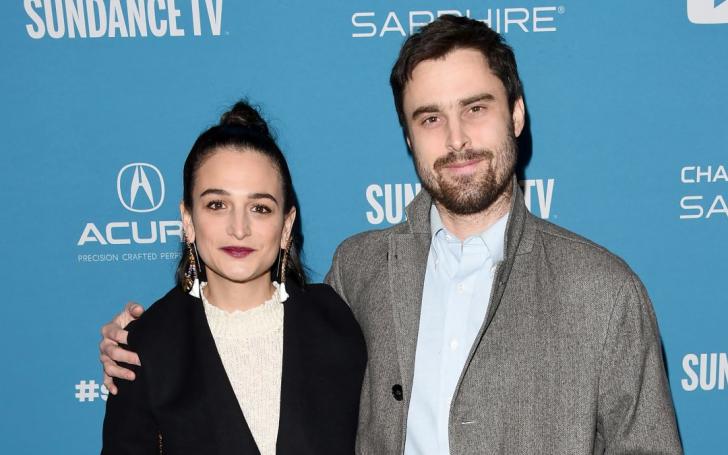 After a few failed relationships, Jenny Slate is in a better place, personally. She is an engaged woman and hopefully, she will soon walk down the aisle.

Regardless, if all goes well, this will be her second marriage. Today let’s take a closer look at her romance with her boyfriend turned fiance, Ben Shattuck. Also, know about her ex-husband and past affairs.

Jenny Slate Engaged to Boyfriend Ben Shattuck: How did it happen?

Jenny Slate is currently betrothed to Ben Shattuck, an art curator. They took their lovey-dovey to the next level after getting engaged in 2019.

Back then, Jenny and her beau were vacationing in France. Ben had already planned on proposing to his girlfriend during their trip to the most romantic country in the world.

At first, Jenny shared the happy news via her Instagram handle. In the series of pictures she shared, the comedian wrote,

“He took me to France and made a picnic and made me feel happy and free and then he asked me to marry him and i screamed YES. I love you @benshattuck_art, you are the kindest and brightest and I am so grateful and here we go and keep going.”

Besides, Ben too shared pictures of the duo while announcing their engagement.

When did Jenny meet her fiance, Ben, for the first time?

Jen and Ben, the name really rhymes, isn’t it? So the duo, Jen & Ben, first appeared together during the Sundance Film Festival in January 2019.

Jenny was set to appear at the event to debut her film The Sunlit Night. However, she debuted more than just her film.

Initially, we thought they were just close pals, but, their coziness proved otherwise. During the entire event, they couldn’t get their hands off each other.

The same day they also attended a private dinner for her film at St. Regis Deer Crest Resort. The Dedee Shattuck Gallery curator was even photographed kissing the actress at one point during their dinner. The lovebirds rocked matching light-colored sweaters at the event.

This was the first appearance they made and since then the duo had been going out. Fast forward a few months, and they are engaged to be married.

But this isn’t the first engagement for Jenny and nor the first affair.

Unlike Jenny who is an actress, Ben is a writer and an artist. Ben studied at the College of Architecture, Art, and Planning, at Cornell University.

An artist and curator, he has an Instagram account dedicated just for his paintings, @benshattuck_art. Moreover, Ben has had won numerous awards, both for his writing and painting.

He currently works as the director of Cuttyhunk Island Writer’ Residency. Besides, he is an art curator at his mom’s Dedee Shattuck Gallery.

Jenny Slate once married to Dean Fleischer-Camp: How it began?

Jenny was previously married to Dean Fleischer-Camp, an American filmmaker. The former flames tied the knot on September 15, 2012, after dating for years.

They began their romantic journey back in 2007. Before dating officially, they were dating platonically. After a few months, Jenny and Dean shared their first kiss, right outside the Williamsburg Bar.

Soon Dean moved in with Slate. It was during this time they co-created the viral Marcel the Shell With Shoes On.

Why did she divorce Dean Camp?

Jenny and Dean’s intimate relationship lasted around a decade before it finally ended. They announced their separation in May of 2016. Though Dean remained silent about their divorce, Jenny revealed her part of the story.

She disclosed that in order to save their friendship, the divorce had to happen. “We’re good friends. That’s why we got divorced,”

Both of them are still on good terms with each other.

Around the same time, she separated from her husband, Jenny started a behind the scene affair with Chris Evans. The exes became close while shooting for the movie, Gifted.

When the pair’s behind the scene romance came forward, all eyes were on them. No surprise here as anyone linked with Chris will definitely be chased around by a lot of paparazzi. Slate was no exception either.

They made their relationship public after appearing at the premiere of The Secret Life of Pets in June 2016. Nevertheless, they called it quits in February 2017 after going out for several months. A source at the time told the break-up happened because of conflicting schedules between the two.

Months after splitting, the duo sparked dating rumors yet again in October of the same year. They had a few flirty exchanges on Twitter and subsequently, they were eating out at a restaurant in Atlanta.

The following day, onlookers spotted the duo on a double date with Robert Downey Jr. and his spouse, Susan. What’s more, she even appeared in a Christmas Day photo with Chris’s brother, Scott.

Christmas with my favorite Jew! @jennyslate

Sadly, just when we thought they were back together for good, they broke up yet again. In an interview with the New York Times, he opened up about his split with Jenny.