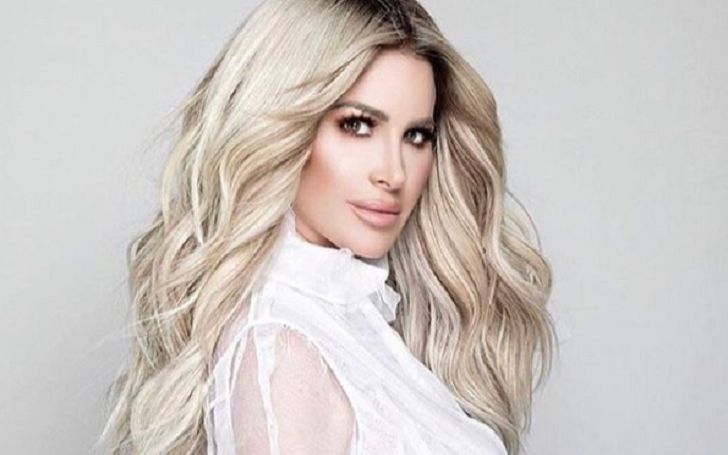 Have you ever watched the acclaimed reality TV series The Real Housewives of Atlanta? If so, then you might have noticed Kim Zolciak-Biermann, who was a key member of the show for around four years. Besides that, she once worked at an adult entertainment club.

While taking her career from a stripper to a reality TV star, Kim went through a series of ups and downs in her private life. Her struggles started when she was impregnated by a 30-year senior police officer in high school.

When she passed the hurdles and thought she was settled with the love of her life i.e., her husband, Daniel, she got into yet another problem. Her hubby denied being the father of their daughter. Their marriage never again made them happy and they got divorced eventually.

As of 2022, Zolciak lives a delightful married life with her new spouse Kroy Biermann. The two are blessed with four children. In today’s article, we will talk about Kim Zolciak, including her childhood, career, relationships, and more. Let’s begin the journey with her relationship with her parents.

Who are Kim Zolciak-Biermann’s Parents? Their Relationship at Present

Kim is the daughter of Joseph (father) and Karen Zolciak (mother). While talking about her relationship with her parents, the TV star hasn’t been on good terms with both of them since her marriage to Kroy in 2011.

Everything went south between the mother-daughter duo following an incident when Kim didn’t let her mom use the restroom inside her house.

In late 2017, the ex-The Real Housewives of Atlanta star talked about her relationship with her mother would never be the same in an episode of Bravo’s Don’t Be Tardy.

There she told, “My children, I will always be in their life. But my mom? I will not let her back into my life, let’s just be clear.”

Belongs to a Military Family: Her Siblings and Ethnical Background

Kim was born Kimberleigh Marie Zolciak on 19th May 1978, in Pensacola, Florida. She grew up in a military family in Windon Locks, Connecticut. She has a brother, named Michael.

As for her ethnicity, Zolciak is of Polish and Italian descent. Her nationality is American.

Kim went to East Catholic High School, graduating in 1996. She later enrolled at the University of Connecticut. She made her move to Atlanta, Georgia with her parents at the age of 21 after her graduation.

Who is Kim Zolciak Husband?

The reality TV star tied the knot with Kroy Biermann on November 11, 2011. The wedding was held at their house located in Roswell, Georgia.

According to Heavy, Kroy’s parents weren’t in favor of their marriage. Kim told in season 3 of Don’t Be Tardy,

“Kroy’s parents weren’t very happy with our marriage. I’m not picture-perfect, I had two children before I got married to your son…”

Kim first met the Atlanta Falcons football player at the charity event Dancing with Atlanta Stars held in May 2010. They dated for over a year before their nuptials and are leading a happy married life ever since.

Kim Has Four Kids With Her Hubby

Kim and her husband, Kroy have become parents four times. The former reality star gave birth to their first child, a son named Kroy Jagger Biermann, Jr. on May 31, 2011, months before their wedding. Just a year after their first child’s birth, their second kid, a son Kash Kade was born on 15th August 2012.

Has Two more Children from Her Two Different Relationships

Kim has a daughter named Brielle Biermann with John MacDougald, a police officer. She was 30 years younger than John at the time she gave birth to her first child as she was just 17 and the married cop was 47. She became pregnant with his child while studying in high school. Later on, the officer with 24-years of service was fired for cheating on his wife.

The reality TV personality then linked to Daniel Toce. The two were in a relationship for some time before they tied the knot on 5th May 2001. Sources say, their wedding ceremony was held in Destine, Florida.

Soon after their marriage, the duo headed to Atlanta, Georgia due to Daniel’s job there. However, things soon started becoming worse between the couple because of Toce’s bad habits.

They Separated After Three-Month of Nuptials: How it all happened?

Zolciak’s relationship with Toce didn’t sustain for long and they went their separate ways after three-month of conjugal life. The TV star filed for divorce on 18th September 2001. Apparently, Kim was eight months pregnant with their first child, a daughter Ariana Biermann, born on October 17, 2001.

Their relationship turned sour after Daniel reportedly claimed not to be the father of Ariana. He said he was on a golfing tour at the time Kim conceived the baby girl. However, after some time, it was revealed that Daniel is indeed the father of the child.

Talking about their divorce finalization, it came to an end on February 11, 2003. The former flames established a support payment system for their daughter. They have shared legal custody of their child.

After their divorce, Kim’s ex-husband Daniel went on to marry his third wife Mary who had a daughter from her previous relationship. Toce was involved in an illegal sexual relationship with his step-daughter when the girl was even under 16. When one of his family members revealed it to the police, they started an investigation.

Eventually, he was sentenced to 10 years in prison after pleading guilty to molesting a minor in 2011. But, Daniel was released from jail after two and a half years in February 2013.

Her Career: Was a cast member of The Real Housewives of Atlanta

Kim is a TV personality who came into the limelight after her appearance on the reality TV series The Real Housewives of Atlanta. It aired on Bravo on October 7, 2008. She left the project during the middle of the fifth season in 2012.

Zolciak later started appearing in a reality show called NeNe and Kim: The Road to Riches sharing the screen along with fellow The Real Housewives cast member, NeNe Leakes.

Prior to her on-screen career, Kim tried her hands in country music. She first came out with her single “Tardy for the Party,” in 2009. However, she couldn’t find the desired success in this field and she changed her track.

Kim Zolciak Life Before Her Fame

Her wealth is $3 million in 2022. She predominantly earns her money from her successful TV career and many other works. She currently resides in Atlanta along with her husband and children.