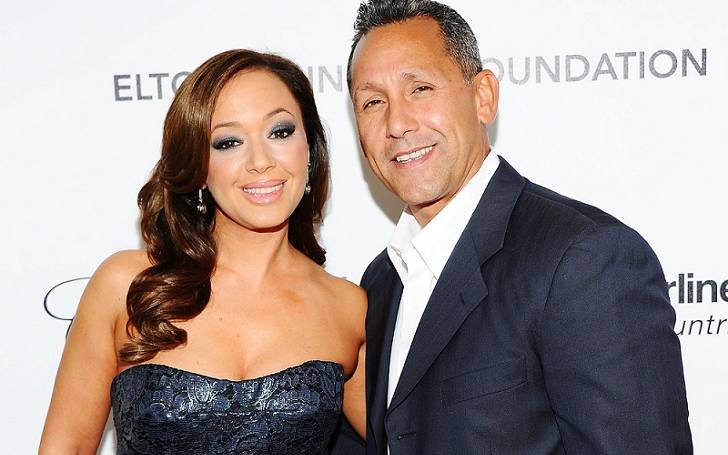 It’s common for celebrity marriages to fall apart. But a few relationships in Hollywood are still alive sharing the beautiful matrimonial relationship for years. Although the lovers use some tips and tricks to make their relationship much happy, eventually their commitment and understanding play a major role to make it long last.

Here we have one of the most beloved couples Leah Remini and husband Angelo Pagan. The loving couple has been married for several years now.

Let’s take a close look at their envy-inducing relationship. Also, know about their children and key to their happy married life.

The King of Queens star Remini tied the knot with Angelo Pagan on 19th July 2003. Their ceremony held at the Four Seasons Hotel in Las Vegas. The wedding was conducted by a minister from Remini’s former Scientology center. The couple walked down the aisle in front of 125 guests.

It is really hard to maintain both professional and personal life hand in hand for years, but the couple is still together with no signs of conflict in their years-long marriage.

When did they first meet? Their engagement

Remini came across her then future-husband Pagan at El Floridita, a Cuban restaurant and nightclub in 1996. Leah stated it was love at first sight for her love. Recalling their first meeting, the actress told RuPaul Show,

Remini added with a laugh,

I was like everything wrong. Everything that you shouldn’t do as a girl is ask a guy when he gets off work, hit it real quick and there was a lot of that. It was all bad looks.

The couple got engaged in late 2002. Pagan popped the question in a candle-lit Los Angeles restaurant.

The couple is also a proud parent of a daughter

Leah and hubby Angelo welcomed their only daughter, Sofia Bella Pagan on 16th June 2004. The actress told it wasn’t hard to get pregnant with her first child after a four-month of their marriage.

In 2015, Sofia was then,11, baptized in the Catholic Church. On 5th September, Remini shared a photo from her daughter’s baptism with the caption,

The doting parents often appear in public with their adorable and precocious daughter.

Angelo has three grown sons named Alex Pagan, Angelo Pagan Jr., and Nicholas Pagan. All of them are active on Instagram with a few followers. He is also the grandfather of his son Alex’s child.

Miss my boys!! @nicopagallo @alextimes_two and @pockets93 ! Had a great 4 days with my sons, wish it could’ve been longer! #sons #papisongos #kobelove

However, there are no details about Angelo’s previous relationships. So, it is hard to find out who are his sons’ biological mothers.

Leah Remini joined the Church of Scientology very early. Despite her three-decade commitment to Scientology, the actress left the Church in July 2013. Her husband later also decided to leave Scientology.

In the meantime, the devout Scientologist Remini explained the reason behind her exit,

It has also been reported that King of Queens actress broke from the church after years of questioning about the management of Church leader David Miscavige.

In October 2015, Leah further talked about her time at the church in an interview with Dan Harris on ABC’s 20/20. Just a few days later, her spouse Angelo also tweeted, “Free at last free at last thank god almighty…”

On 3rd November 2015, Remini released a book called Troublemaker: Surviving Hollywood and Scientology. She widely wrote about her experience at church in the book.

Leah Remini ran a reality show with her family

Leah Remini previously had her own reality show It’s All Relative which premiered on TLC on July 10, 2014. It was all about her family including her hubby, daughter, and parents.

In March 2015, Remini announced on her social media “We will not be returning for season 3.” Pagan also worked as a producer for It’s All Relative.

Both Remini and her life partner Pagan are close friends of Jennifer Lopez. They were also pretty close to Lopez’s ex-husband Marc Anthony. In an interview with Oprah Magazine in June 2019, Leah revealed she first acquainted Lopez through her colleague, Marc Anthony,

They often share a beautiful snap of themselves on their media accounts.

Lopez is currently in a relationship with her boyfriend-turned-fiance Alex Rodriguez.

The couple not frequently but sometimes they made their joint appearances in public. Back in early 2020, the two were spotted enjoying their lunch date in Malibu, California.

Furthermore, in May 2019, the power couple also appeared on a date night in Los Angeles.

They currently reside in their $8.5 million Studio City home

Leah Remini lives in a house located in Studio City, Los Angeles with her husband and daughter. As per sources, the actress bought the 9,326 square feet property back in 2003 for $3.75 million. It has five bedrooms, nine bathrooms, and a gym too.