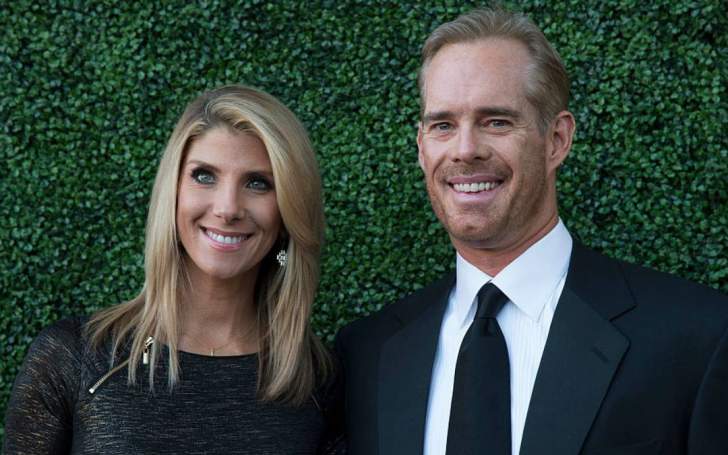 If you follow NFL then the name Joe Buck probably rings a bell. The American sportscaster has been announcing Super Bowls’s play-by-play for the past decades or so. The veteran announcer has achieved numerous accolades over the course of several years.

Apart from his successful pro-life, Joe also enjoys a happy marital life with his second wife, Michelle Beisner. Although his first marriage came to a sad end, Joe is relishing his life with Michelle, a former cheerleader.

Today let’s take a close look at his personal life and find out some interesting facts about Joe Buck’s wife, children, past relationships, and more!

Joe Buck’s married his wife on a beach: A-listers attended the wedding

Since 2014, Joe Jr. is happily married to Michelle Beisner. They exchanged vows on April 12, 2014, at a beachside wedding. The holy matrimony was held at Cabo San Lucas, Mexico.

Joe and Michelle didn’t share a lot of pictures from their wedding. The only glimpse we got from the wedding is when Jordan Palmer and Troy Aikman shared a few on Twitter.

At the wedding, Joe wore a dark blue suit with a sky blue tie. His bride, on the other hand, wore a white gown.

Joe and Michelle got engaged a year before the wedding: Story of their first meeting

The happy-going pair met for the first time at Super Bowl XLVII in February 2013. One can say that Joe is a lucky guy who met the love of his life at an NFL event, something which he has been involved with for decades.

Shortly after their meeting, they started going out. At first, Michelle confirmed the great news to The Big Lead on August 20, 2013.

Although they first started going out in 2013, Joe had been trying to take Michelle out since 2012. So what happened was, Joe called on his friend Rich Eisen, who happened to be friends with Michelle as well. Joe asked Rich if he could act as the cupid between the two and ask for the beautiful blonde’s number.

Afterward, Rich, being a great friend, called Michelle and told her about a friend who has been asking for her number. At first, Michelle guessed the name of his friend and said, ‘Troy Aikman.’ ‘Cris Collinsworth.’ ‘Al Michaels.’

When Rich answered none of them, Michelle said, as she recalls, “Please don’t say it’s Joe Buck.” Michelle had never met Joe yet after seeing him on TV, she had the impression that the man is a bit arrogant and smug.

However, after falling in love with him, her statement changed. She touts her husband as “the furthest thing from arrogant or smug that any human being could be. I mean, the complete and opposite end of the spectrum,”

At that time in 2012, she was in a relationship, however, when they met in 2013, she was single. Subsequently, after dating for a while Buck and Beisner got engaged in August 2013.

Does Joe Buck share children with his second spouse?

Yes, Joe is a father of twin boys with Michelle. Joe Buck’s wife gave birth to the boys, Wyatt Joseph and Blake Andrew on April 26, 2018, right after Joe’s birthday on April 25th. Though the duo is quite excited since they became parents to the twins, the whole pregnancy took its toll on both of them, especially Michelle.

We all know how with age, your fertility decreases as well. Similarly, Michelle was 41 when she became pregnant for the first time. After having trouble conceiving, the husband and wife decided to take the help of in vitro fertilization.

Talking about how the whole experience with IVF was, Michelle told ESPN,

“We went through IVF, and I can tell you there is not much that’s more financially, emotionally, physically taxing than in vitro fertilization.”

“It is a very grueling, gnarly process. But after three total rounds, Joe and I found out we were going to have two sweet little miraculous babies.”

Their boys are two-year-old now and they have so many loving people to play within the household.

Born on October 15, 1976, Michelle studied at the Green Mountain High School. She later attended the Metropolitan State Unversity and studied communication. It was during her time in college when Michelle got into the whole NFL world.

Subsequently, she decided to become a cheerleader and joined the Denver Broncos Cheerleading Squad. She was a part of the team for six years and even captioned them for four years.

After calling it quits as a cheerleader, she decided to become a reporter for the NFL. Consequently, she joined the NFL network in 2006. During her time there, she appeared in Game Day First, Game Day Morning, NFL Total Access, and NFL Fantasy Live.

Since 2014, she is working in the ESPN network. Furthermore, she is one of the members of the Monday Night Countdown.

On January 23rd, 1993, Joe tied the knot with Ann Archambault Buck. She is also a former cheerleader. The lovebirds dated for some time before eventually deciding to get married. They said their ‘I do’s’ in a super private ceremony.

From their wedding, the couple is blessed with two beautiful children, both girls, Natalie Buck and Trudy Back. His daughters are adults now.

It’s a #LuckyBastard Christmas legging kind of Christmas. Thanks @goldsheepclothing

Joe and Ann’s marriage couldn’t last long and they called it quits in 2011, after being married for 18-years. Despite their differences, the pair still shares a cordial relationship with each other. And besides, just like her ex-hubby, Ann is also in a new marital relationship.

Meanwhile, Joe’s daughters Natalie and Trudy share a healthy relationship with their half-twin brothers. He often invites them during the holiday season. Moreover, they are also tight with their dad’s new wife, Michelle.

Safe to say, the bucks are an excellent bunch. They laugh together, they eat together, and most importantly they share an immense love for each other.