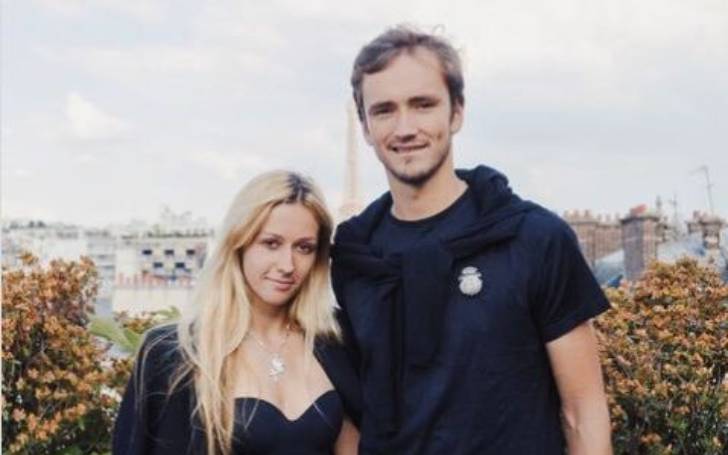 Daria Medvedev is a former Russian tennis player, entrepreneur, and media personality who is best popular as the wife of the professional tennis player Daniil Medvedev.

Her husband is a Russian pro-tennis player currently standing at no.4 by the Association of Tennis Professionals (ATP). The 26-year-old has won 14 ATP Tour singles titles including the 2020 ATP Finals and the 2021 US Open.

The celebrity spouse and her husband wed in 2018 and have been together since then. During an interview in 2019, he credited his marriage for his extensive career success. Here, find more details about their personal life, early dating phase, and more. Also, we will talk about Daria Medvedev’s age, bio, family, and others.

The celebrity spouse Daria Medvedev was born and raised in Russia. She is reportedly 25 years of as of 2022, however, her exact birth date is not revealed to the public.

After high school, she enrolled and graduated from Lomonosov Moscow State University. Likewise, she reportedly went to the Moscow State Institute of International Relations and earned a degree in journalism. Moreover, she was a junior tennis player during her high school and college days.

Moving on to her husband, Daniil Sergeyevich Medvedev was born on 11th February 1996 to Sergey Medvedev and Olga Medvedeva. He is 26 years old as of 2022.

The tennis star grew up alongside his two sisters Julia and Elena. His sisters are 12 and 8 years older than him. As for his education, he went to a specialized school graduating in physics and math.

Later on, Daniil attended the Moscow State Institute of International Relations majoring in economics and commerce but dropped out in order to fully focus on tennis. Moreover, Medvedev earned his diploma as a coach from the Russian State University of Physical Education, Sport, Youth, and Tourism.

Daria Medvedev Was Also A Tennis Player Like Her Husband

As mentioned above, Daria played junior tennis during her high school and college days. Sadly, due to her injuries, she was unable to go professional like others.

This was confirmed by her husband himself. He said that Daria played for a while but had to discontinue her interest. Medvedev also said that as she knows tennis like himself, it is easier for them at times of his games.

“She played tennis until she was 17 or 18, but because of injuries she couldn’t reach the desired level. Nevertheless, it’s great that she understands tennis. She knows that we can’t go shopping before the game. Understands that I can be busy from 8 am until the evening.”

“Perhaps it’s not easy to get used to it when you don’t understand anything in tennis. It helped me to become better as a person and a player.”

As Daria was also a tennis player herself, she fully supports her husband and gives her 100% in order to push him to his limits. Listening to how Daniil describes his wife, Daria is very understanding regarding their busy life.

In an interview, Daniil called his wife the most important member of his team. He says,

“She gave me a lot of confidence. I always say that it’s the moment I made the proposal to her, that when I started to go up. It was at this moment – it was after Wimbledon – I was, I think, 65 or something like this, and at the end of the year, I was already 15.”

For anyone who doesn’t know, Daniil went from top 65 to top 15 straight up in just one year after marrying Daria. This solely proves how much support and motivation Daria gives to her husband.

Maybe it was luck or his hard work, either way, Daniil Medvedev is currently at no.4.

The 26-year-old began his junior year at the age of 13. Likewise, he won his first junior title as a qualifier in December 2010 shortly after his third tournament.

Between Oct 2012 to July 2013, he won a total of six titles which includes four consecutive titles. He ended his junior career with an overall 109-43 record.

As of 2022, Daniil represented team Russia in the third edition of the ATP Cup winning his singles match against Canada’s Felix Auger-Aliassime. Likewise, he started his North American summer hardcourt season by winning the title at the Los Cabos Open.

Daniil stands 6ft 6 inches or 198cm tall in height and has a very powerful first service which is reportedly capable of reaching 225 km/h (140 mph).

When Did Daria Medvedev & Husband Daniil Medvedev Marry? Any Children?

The lovers first crossed paths for the first time when Daria was just 12 years old. They met at a cafe where Daria and her team were dining when she heard a tennis racket being thrown.

Upon hearing that, she went on to watch him play. During an interview with Tatler Russia, she recalled her initial memories of Daniil and said,

“He used to fight till the end, he was prepared to do anything on the court, no matter how ugly his game may look, in order to win. In this sense, he hasn’t changed at all,”

Though the lovers crossed paths as teenagers, they began dating officially only in 2014. Similarly, after being together for three years, the pair moved to Monte Carlo, Monaco, and reside there to date.

The husband-wife got married in a low-key private wedding ceremony on 12th September 2018. Their wedding was just a few days before Daniil’s game in the September Davis Cup.

As for now, the couple does not share any children and has not hinted at welcoming a junior Medvedev anytime soon.

In an interview, he made a statement saying,

“It’s the third anniversary for me and my wife. During the tournament, I couldn’t think of a present. So when I went in the final, I thought, ‘I need to find a present fast.”

He further added that

“if I lose I have no time to have a present, so I have to win this match. I love you, Dasha”.

The 26 years old professional player has a current net worth of $20 million in mid-2022. Back in 2021, he was listed in the Forbes list of the highest-earning tennis players with an annual income of $13.9 million.

Likewise, as of 2022, he managed to earn around $23.2 million in prize money only. The pro player is sponsored by  Tecnifibre for racquets, Lacoste for apparel and shoes, and Bovet for watches.

Similarly, he is the brand ambassador for Tinkoff Bank, BMW, and HyperX. In November 2021, he was signed by Guojiao 1573 as a promoter. Moreover, he was signed to Lotto for apparel and shoes until 2019.

Who Is Tharita Cesaroni? Her Professional And Personal Life In Detail