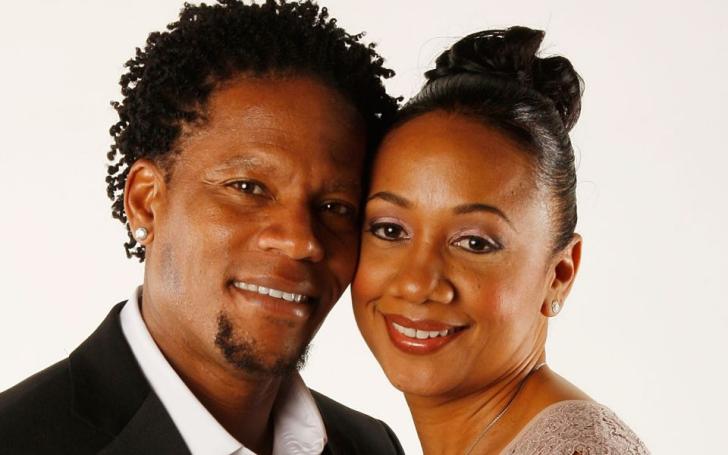 We all know D.L. Hughley is one of the greatest stand-up comics. The man has earned everything, from stardom to fortune. However, he wouldn’t have come this far if his wife LaDonna Hughley, 58, wasn’t standing in his corner.

Yes, LaDonna is that one person who pushed Darryl Lynn to work hard. Aside from his professional life, she even supported him during his dark times. Back in the early 90s, D.L. almost single-handedly broke down his marriage, and yet his wife forgave him for his crimes.

Today let’s take a moment and find out answers to who is LaDonna Hughley? What type of incident literally shook the relationship between her and D.L. to its very core?

Who is LaDonna Hughley? Her Father moved to LA as part of the Great Migration

For the world, she is famous as the comedian D.L. Hughley’s wife, but there is a lot more about her than what meets the eyes.

She was born LaDonna Yvonne Murphy on May 2nd, 1962 in West Hills, California. She is the daughter of Annie Marie Murphy and her husband Kenneth Ray Murphy. She has one sister named Lisa Murphy Oates. Just like LaDonna, Lisa too enjoys a successful marital life with her hubby.

At the moment, LaDonna is 58-years-old. She belongs to African-American ethnicity and has American nationality. She traces her maternal roots to Jamaica.

Her dad Kenneth moved to LA at the age of six. He moved from the rural south to the urban west as a part of the second wave of Great Migration by African-Americans. On the other hand, her mother Annie used to work as an electronic instructor. Apart from this, she is also a retired, Registered Nurse.

Not much is know about the early or later part of LaDonna’s educational background. Safe to say, she studied at a local high school in West Hills, CA.  She studied social work at California State University. Yvonne enrolled at the university in the latter part of her life in the late 1990s.

Talking about her career, LaDonna, at the moment, doesn’t have a lot of stuff on her table right now. Sometimes she co-hosts the podcast, The Hughley Truth alongside her husband D.L.

Previously, she also tried her hands in the production of a few films. She worked as a producer in two movies, Colored My Mind (2013), and Black Love (2017).

In the movie, Colored My Mind, LaDonna alongside four other women guides people through the world of autism. She was inspired to do the movie because her son, Kyle suffers from the same problem.

There aren’t many relationships in the showbiz that has lasted as long as the Hughley’s. Darryl and LaDonna have been tied into a holy bond for more than 30-years. They exchanged vows, a week after valentine’s day, on February 22nd, 1986, in a relatively small wedding.

D.L. and LaDonna, initially started dating in 1983, a few weeks after they first meet. Speaking of which, they first came across each other whilst working at the Los Angeles Times. At the time of the meeting, he was working as a clerk at the LA Times. At first, he had entered the company as a telemarketer.

From her wedlock, with D.L. she became a mother of three children, Ryan Nicole Murphy, Kyle Aaris Hughley, and Tyler Whitney Hughley aka DJ Lucci.

Her eldest daughter Ryan Nicole Shepard was born in 1987. She is a food journalist and happily married to Dr. Alejandro Shepard since 2019.

Son Kyle was born in 1988. Since his birth, he suffers from Asperger Syndrome a type of Autism. At the moment, he works as a Krav Maga instructor.

Youngest daughter Tyler, born in 1991, is a DJ. Moreover, she is a lesbian and is currently in a relationship with Alex Phillips. They are dating since September 2017

LaDonna told her husband D.L. to not call himself a comedian unless he takes onto the stage

Upon reading the statement, you can feel how straight forward LaDonna was from the beginning of their relationship. And there was an even bigger reason to be blunt with D.L. as they were having financial difficulties.

Although Darryl was doing whatever he could to make ends meet, Yvonne knew he had a lot more potential. In addition, the family had a terrible life back then. They had already become parents to their first child and the second was on its way. Even so, D.L.’s career as a comedian was nowhere in the picture until one day.

One day LaDonna confronted him and asked him to stop calling himself a comedian unless he takes the stage. While recalling this moment, the Hughley family patriarch told Hartford Courant, “It was an epiphany.”

Subsequently, he showed up at the Total Experience Club in South Central on the eve of 1988 Valentine’s Day. He did shtick and soon his career took off.

D.L. fathered a son from his extra-marital affair: LaDonna’s reaction surprised us all

It happened in the early 90s. Darryl’s career was just taking off when he hooked up with an unknown woman. However, this isn’t the shocking part. So after hooking up, he finds out that the woman has given birth to a baby boy.

Wait there’s one another shocking and tragic part to this story!

D.L.’s life literally turned upside down after he found that he’d conceived a child outside his marriage. But a more devastating new was on the horizon. The child he’d fathered died after his mistress’s boyfriend violently shook the baby that resulted in brain damage.

D.L.’s mistress took the child to the hospital but unfortunately, the infant was pronounced dead. The news of the infant’s demise deeply saddened the comedian. Not only has he cheated on his wife but because of his misdoings, an innocent child had lost his life. This was one of the darkest days of his life.

For some time, he kept the information a secret, however, he later decided to share it with his wife. D.L. knew upon hearing about his crimes, his wife will leave him for good, but, luckily, something extraordinary happened. His wife forgave him. Not only did she pardoned him, she even said,  ‘I wish you would have told me this and we could’ve went through this together.”

Well, the celebrity spouse’s good deeds don’t end here. A few years after the incident unfolded, Darryl’s mistress asked him if he could help her financially. D.L. replied he can’t do anything and only LaDonna can take care of this for you.

To D.L. and our surprise, LaDonna did offer a helping hand to the woman in distress. Apart from financially supporting her, one time, she even consoled her and said, “Sorry for your loss.”