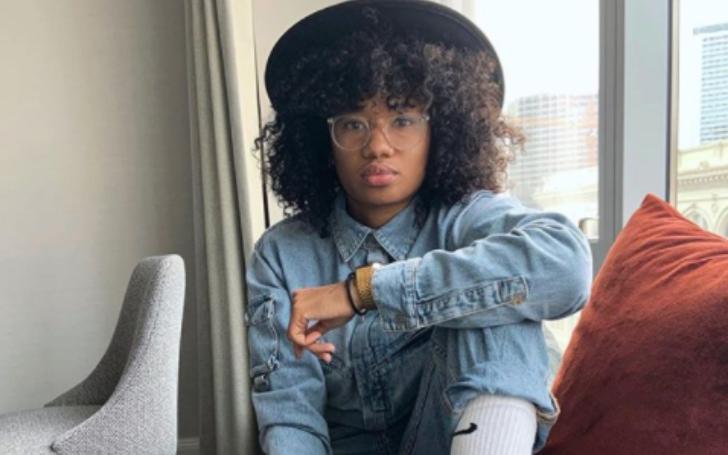 In the early stage of his comedy career, comedian D.L. Hughley had it quite rough. Bills were piling up, he was having trouble making ends meet, and the list goes on. On the other hand, D.L.’ children didn’t have to struggle as much, and all of them are doing great, especially the youngest, Tyler Whitney Hughley.

Talking about her career, she is into Dj’ing and music and has even released a few songs as well. However, what really intrigues many about Tyler aka Lucci, is her sexuality and her relationship status.

Well, without further ado, let’s take a close look at her dating life and find out more about her sexual orientation here today. Further, we are also going to find out her date of birth, bonding with siblings and parents, and more!

She is the youngest child of legendary comedian and actor D.L. Hughley and his wife of over 30-years, LaDonna Hughley. Her mom LaDonna and dad D.L. got married on February 22, 1986, after meeting each other in the year 1983.

Tyler has a very close connection with her mom and dad. D.L. and LaDonna have always supported their daughter in every way possible. Even when she came out, her dad was much too supportive. (more on this later down the section)

After she completed middle school from a local school in California, she attended El Camino Real Senior High.

Upon graduating from high school, she enrolled at the prestigious Full Sail University. The university is famous for teaching all kinds of creative courses. She also studied at the Academy of Art University, right after moving to LA from San Francisco.

Check Out These Star Kids And Some Interesting Details About Them

At the moment, she primarily focuses on her career as a disc jockey or DJ.

Tyler aka DJ Lucci: All about her professional career

All three of D.L. Hughley’s children have followed in different paths as opposed to their famed father. However, Tyler is the only one who scores close to home when it comes to career. She is a DJ and a music producer.

Sometimes I take him to work with me.

So far, she has uploaded around a dozen singles in her sound cloud account. She generally shares only epics. Her most popular epic so far would be Elevator Music Monday – Happy To Be Back. She released the song in August of 2020.

Tyler has served as a DJ in various events. In 2018, she hit the road with her dad during his tour in Augusta, Georgia. In addition, she also Dj’ed at Girls Night Out Tour in June 2018. The event took place at Arena Theatre, Houston, Texas.

Now talking about her sister Ryan, she is a food journalist. She is a passionate cook and has a website named Brown Sugar and Bourbon. On the website, she shares a lot of recipes mostly libations’ recipes. Ryan is married to Dr. Alejandro Shepard since 2018.

Tyler’s brother Kyle is a certified Krav Maga instructor and also learned Muay Thai from Saekson. On top of that, he is also the CEO of “Shortbus Records.” The record is owned and operated by the Hughleys.

Kyle has undoubtedly come a long way from what he was in his childhood. Many of you might not know that since his birth, he was suffering from Asperger Syndrome, a type of Autism. In this health issue, a person has trouble in social interaction and nonverbal communication. D.L. has talked about his son’s health problem on numerous occasions and often chokes up whilst talking about it.

We sure are happy for Tyler’s older brother and wish him all the best for his bright future ahead.

Apart from two biological siblings, Lucci also had one half-brother. From her dad’s extra-marital affair. Yes, D.L. cheated on his wife, LaDonna. The tragic incident happened back in the 90s when Hughley was just starting his journey as a comedian. What’s more, he even fathered a son with his mistress.

However, Tyler’s half-brother died after D.L.’s mistress’ boyfriend violently shook the infant. The shock was too much for the child’s brain to handle, and upon reaching the hospital, the doctor declared him dead.

Upon finding out about the incident, D.L. was devastated. A child born out of his own misgivings was dead, and on top of that, he’d cheated on his wife. He wasn’t brave enough to tell his wife at that time, but sometimes he told her.

To his surprise, LaDonna’s reaction was something straight out of a fiction romance novel. D.L. said during his appearance at Angela Yee’s podcast, Lip Service, “Finally, one day, I tell my wife. You know what she said to me? ‘I wish you would’ve told me and we could’ve went through this together.”

She is one heck of a doting wife, isn’t it?!

Tyler Whitney Hughley is a Lesbian: Does she have a girlfriend?

We know that for many of you, this is brand new information. Yes, Tyler Hughley is gay. Moreover, she even has a girlfriend, whom she has been dating since 2017.

Tyler is in a happy relationship with her lesbian partner, Alex Phillips. What’s really interesting about the duo’s relationship is the amount of love they share with each other. Fun fact, the pair share the same birthday month of April, Tyler, on April 24th an Alex on the 27th.

Although they have been dating for a few years now, Tyler has just now started sharing pictures with her lover. She first revealed her affair to the public on July 15, 2020, by adding a romantic photo with Alex.

On the other hand, Alex has been adding pictures with Tyler since 2018.

Their relationship looks and feels healthy, and we’re sure the couple is in for a long haul. Furthermore, the relationship is also approved by the D.L. and LaDonna. Safe to say, Tyler and Alex are set for life.

Tyler Whitney Hughley Net Worth: She enjoys a lavish lifestyle

As of 2020, Tyler Whitney’s Hughley net worth is still under review, however, we do know she lives an affluent life. All thanks to her super-rich pops. Her dad D.L. has a huge net worth of $10 million.

Besides, Tyler has just started her career, so we’re sure in a matter of a few years, her total fortune will rise to a million dollars.