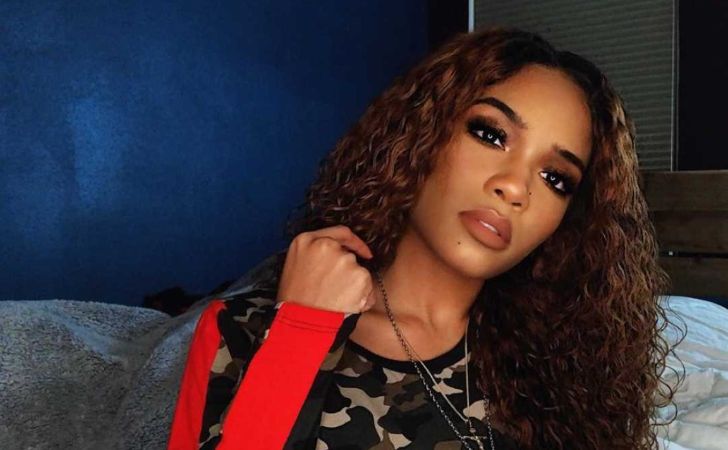 Lauryn McClain is an actress, singer, and writer who started working in the industry as a child actor. Besides, she is also prevalent as one of the members of the girl group “Thriii” and the elder sister of China Anne McClain.

Having an interest in music from an early age, Laryn knew what she wanted as a career when she was still a child. Acknowledging and pursuing her dreams as a school kid, she got success at a very young age. She has appeared in various movies and TV series like The Gospel (2005), Daddy’s Little Girls (2007), McClain Sisters: Rise (2012), The  Great Divide (2012), Haunt (2019), and more. She has also explored other parts of the entertainment industry and has started nurturing her writing skills.

What’s more! The McClain sister has a well-established career as of now but what about her personal life? Is she dating a boyfriend? How well does she keep up with her sisters? Let’s sneak peek into one of the McClain sister’s life to find out her age, height, siblings, and more.

She was born Lauryn Alisa McClain in the year 1997 and celebrates her birthday on January 9. The actress opened her eyes to her parents in Decatur, Georgia, and was raised in her hometown alongside her siblings. Moreover, she comes of African-American ethnic descent and holds American citizenship.

To mention her academic qualifications, she is a graduate. However, she hasn’t talked about her university and school. According to sources, she was into singing, acting, and dancing from an early age. She used to perform for the musical band in her school.

Having said that, since she was brought up with her sisters, she might have attended the same school. If it is so, she went to Oak Park High School in Decatur and later enrolled at the local university in the same place.

How Old Is Lauryn McClain?

What Is The Height Of Lauryn McClain?

The singer has an average height and stands 5 feet and 3 inches tall.

Lauryn McClain Has Two Sisters And a Brother

As we mentioned earlier, the 25 years old was raised with her siblings. So, it is obvious that she is not a single child. She is the second child of her mom and dad with an elder sister, a younger sister, and a younger brother.

The oldest McClain sister is Sierra Aylina McClain born on March 16, 1994. Similarly, China Anne McClain is the youngest sister among the three sisters, born on August 25, 1998. Like Lauryn, her sister is also a popular name in the industry.

After all the sisters were welcomed by their parents into this world, the baby boy was born. Gabriel McClain is the youngest and the only brother of the McClain sisters. He was born on 17 April 2001 and is also following in his sisters’ footsteps. The brother and sisters share a great bond and are often seen on each other’s social platforms.

Looks like Lauryn and all her siblings have followed their parent’s path to make an entry into the entertainment industry. Both their mom and dad are also from the same field and she along with her siblings, grew up watching their work in Disney films.

Her father is a music producer Michael McClain who produced the lead promotional single for the Disney film Chimpanzee. It was performed by the McClain sisters themselves. He debuted through the album of Solange Knowles.

Similarly, her mother Shontell McClain is an actress and a former screenwriter. She has acting and writing credits for TV series and movies. She has written a few episodes of Meet The Browns (2009) and House of Payne (2007). Likewise, Shontell starred in Six Blocks Wide and Disney 365 (2013) as an actress.

Lauryn Alisa McClain Is The Part of The Music Group “Thriii”

The McClain sisters were interested in music from an early age as they looked at their father producing and writing songs. Eventually, the kids also started to write songs, choreograph, and dance on it.

Following their growing passion for music, Lauryn and her two sisters formed a group and named it 3mcclaingirls in 2005. The group debuted through their first song Daddy’s Girl. Also, they made an appearance in the movie Daddy’s Little Girls in 2007.

Subsequently, the group changed its name to “McClain Sisters” in 2011 and they started working on big projects in Hollywood. Lauryn, Sierra, and China released multiple singles and albums like “The Great Divide,” “Perfect Mistake,” Electronic Apology,” and many more.

The McClain sisters even started the show A.N.T. Farm with their youngest sister China Anne which started in 2011 and ended in 2013. After working in the music industry for some more years, McClains took a long break from it. Their last song was Feelin’ Like, released in 2015 before going on hiatus.

After a while, the group had a comeback with their new single “My Sanity,” in 2020. They came with a revised band name “Thriii”.

McClain’s Career Highlights: What Movies Did Lauryn McClain Play In?

Apart from being part of the music group “Thriii,” Lauryn has appeared in various music videos, movies, documentaries, and TV series. Besides, she is also an aspiring writer with some writing credits in her name.

The 25 years old, debuted on-screen in 2005 with a small shot on The Gospel. After that, she starred in Daddy’s Little Girls, McClain Sisters: Rise, The  Great Divide, Haunt (2019), and more. On the other hand, she wrote an episode of Black Lightning and A.N.T. Farm.

Is Lauryn McClain In a Relationship?

Well, even though the child actress hasn’t spoken about her being engaged to any guy, it seems like she is dating a boyfriend. While multiple tabloids claim her to be single at the moment, her social media talks something different.

Lauryn is in a romantic relationship with her boyfriend Terrence Green (aka rawswagger) for more than a couple of years now. However, the specific date of their first meeting is still behind closed doors. Her boyfriend Rawswagger is a media personality as well as a dancer and an actor.

Along with the tag of celebrity, we can also call her a social media influencer as she has millions of followers altogether on her social sites. She updates her fans and followers about her work and daily activities through it.

What Is The Net Worth Of Lauryn Alisa McClain As of 2022?

Involved in so many sectors of the entertainment industry, Lauryn has decent earnings. As an aspiring celebrity in Hollywood, we are sure that her earnings will only go higher. She started as a child actor and has continuously worked in this field diversifying her talent in different sectors.

As of 2022, Lauryn McClain’s net worth is $2 million. Similarly, her sisters Sierra and China have the same amount of fortune as hers. Meanwhile, her brother Gabriel is also doing well and is on the path to achieving the same success.

Inside The Life Of Josh Kiszka: His Career, Age, Girlfriend, & More