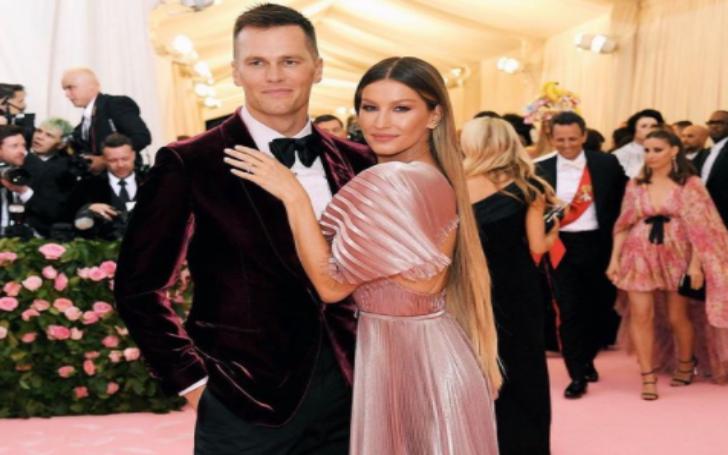 The name Tom Brady has been synonymous with NFL for the past couple of decades. And why wouldn’t it be? The man has won so many trophies that many athletes even dream of. Though he achieved all this stardom due to his hard work, we still cannot forget Tom Brady’s wife, Gisele Bundchen.

In many instances, Tom has claimed without his spouse Gisele, he wouldn’t have been able to reach so far in his career. The supermodel supported him all the way, be it in happy or darker times. The pair is together for around two decades and is a parent of two kids.

Today we’re going to take a close look at Tom’s personal life and find out all the intricate details of his marital life.

We all know the fact that for a sports star remaining in top physical and mental strength is a must. If there is the slightest lag in their daily regiment, it directly influences their overall performance. This is where a reliable, loving, caring, and supporting partner comes in.

When Tom and Gisele first started dating in 2006, the veteran sports star was having difficulties in his personal life. He had just broken up with his girlfriend of a few years, Bridget Moynahan, and the 2006 season wasn’t exactly his best season. However, things started settling down for Tom when the Brazillian supermodel, Gisele came into his life.

Since Tom started dating his wife, he has never looked back. Though the pair did face a few problems in their marital life, they persevered through it all. Let’s find out how it all began for the duo?

Tom and Gisele first met on a blind date

In the majority of cases, if a friend acts as a cupid then the relationship is sure to last. Similarly, a mutual friend of Tom and Gisele set them up on a blind date.

Initially, the friend had told Tom they were only meeting over a couple of drinks. Nevertheless, the casual meeting soon turned into a full-blown romantic eve between two hopeless lovers.

In 2018, during an interview with Jimmy Fallon, Gisele vividly discussed their first encounter. She told that back then many of her friends would set her up on random dates, hoping to find a perfect match for their friend.

Before Tom, she had gone to two blind dates which she now recalls as, “The other two were dinners, which, I was stuck there for an hour and a half thinking, ‘When can I get out? Where’s my food?’”

Bundchen wasn’t expecting much from her third dinner at the Turks & Frogs in New York City’s West Village. But it all changed when Tom walked inside the famous Turkish wine bar. The supermodel, who was looking for nothing more than just a couple of drinks was instantly smitten with the Patriot’s quarterback. In the same interview with Fallon, Gisele said,

“You know, when I saw those kind eyes, I literally fell in love, like, right away. I was like, ‘What?’ He was just… you know how sweet he is.”

On the other hand, Tom was also head over heels. Around the same time, Tom broke up with his girlfriend, Bridget. A couple of months after breaking up with her, he announced his affair with Gisele.

Brady proposed to his girlfriend in the most unique way possible

Whatever Tom does he does it in a classy way. Likewise, he got engaged to the love of his life in a unique way. Back in 2009, Tom was traveling with Gisele and her parents from New Jersey to Boston in a private jet. The retired football player had already planned the event ahead of time.

The plane was fully decked out with white roses and champagne. The supermodel didn’t expect such preparations but we’re talking about the one the only, Tom Brady here. As soon as Gisele said yes, the four members on board the 30-minute plane celebrated by opening a bottle of champagne.

The duo wedded in a relatively small ceremony

One would think two people who are worth hundreds of millions of dollars would definitely marry in an extravagant ceremony. But on the contrary, their matrimonial ceremony was organized in a matter of ten days and it was quite small as per their standard. The only guests at the wedding were their parents.

They exchanged vows on February 26, 2009, at the church of Santa Monica, California. For the nuptial, Brady rocked a Black suit, a white shirt, and a gray tie. On the other hand, his bride looked mesmerizing in a white strapless lace dress featuring a long train. Her veil had white flowers embroidered onto it.

Initially, the newly wedded pair kept the photograph of their matrimonial behind closed doors. It wasn’t until 2018, their 9th anniversary, that they shared their first pictures from the big day.

In addition to this small wedding, Tom and Gisele also had a second ceremony in Costa Rica. Not a surprise considering the number of friends they missed out on inviting to their first ceremony.

Regardless, their beautiful destination wedding was somehow interrupted when a flock of paparazzi came uninvited and their bodyguard’s had to fire a bullet just to give a message. Since the last decade, both of them are relishing their blissful marital life.

Tom and Gisele are proud parents of three children

From their marriage, the twosome became a parent of two biological children, a boy, and a girl. Apart from the two, they also parent Tom’s son, John Edward Thomas Moynahan, born August 2007, from his relationship with Blue Bonds star Bridget Moynahan.

Tom’s eldest son John also shares a terrific bond with Gisele. In fact, Gisele often shares pictures of her stepson on her social media. Meanwhile, Tom has made sure all three of his kids share a cordial bond with each other.