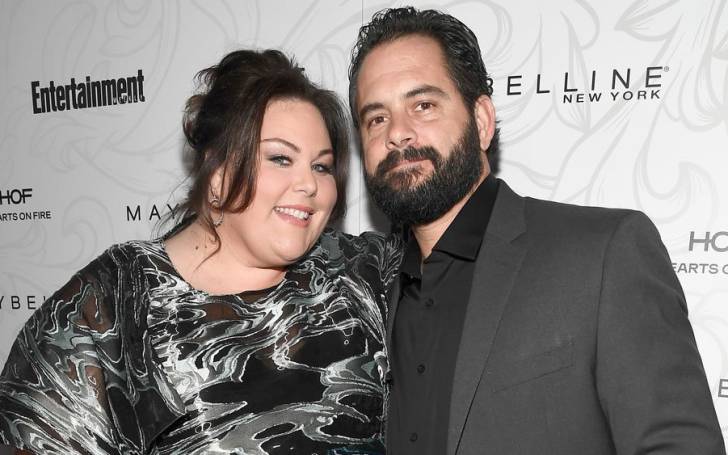 Martyn Eaden is one of those guys who became famous because of their link-up with a celebrity. He came to media prominence due to his marriage and controversial divorce with actress Chrissy Metz.

The English writer married Chrissy when she was just an upcoming actress. Despite their initial bonding, their marriage didn’t sustain for long. They went their separate ways in 2014 but wait till you find out about Martyn’s demand during divorce procedures.

Let’s take a look at Martyn’s life and find out all about his relationship with Chrissy and more!

Who is Martyn Eaden? Famous as Chrissy Metz’ ex-husband

Apart from his association with Chrissy, not much is known about Martyn, though we do know he is a screenwriter. The British national had moved to the United States for good after marrying Metz on January 5th, 2008.

He is originally from Sheffield, England. His whole family stays in England and it might be the case that he moved back home after divorce from Metz.

Talking about his career, Martyn’s only known involvement was in two projects. He was credited as a writer in a short horror Spurned (2016), and in the thriller Death Factory (2014). Judging by his works, it looks like he is into fantasy and horror writing.

Chrissy was born and raised in Homestead, Flordia. She decided to move to Los Angeles to further her acting career. It was around this same time she met like virtually met, British freelance writer Martyn for the first time.

Yes, back in 2006, Chrissy, out of boredom or loneliness, joined an online dating site. In the same site, Martyn also happened to have a profile. Subsequently, the two came across their profiles and were smitten instantly.

They started emailing each other because that’s how you did it back then. The only problem their relationship faced was the distance. While Eaden was in Sheffield, England, his online girlfriend Chrissy was on the west coast.

Martyn then decided to pay his girlfriend a visit in LA. Soon, he started visiting Los Angeles on a regular basis. Chrissy, on the other hand, was not able to travel to England due to her financial condition.

After a year into their relationship, Martyn visited the US once again and proposed his Metz and she accepted.

Their wedding ceremony saw no guests

After getting engaged, the big day came sooner rather than later. The pair exchanged vows on January 5th, 2008, in Santa Barbara, California, in a relatively small wedding.

As tragic as it might sound, both side of the family was not able to attend the nuptials. Why? All because of travel costs. So neither of their parents was in attendance to give their blessing.

Martyn Eaden filed for divorce: Asked for his car and bank account

On November 12, 2014, Martyn filed for divorce, citing irreconcilable differences. According to the divorce documents obtained by RadarOnline, he stated their separation date January 31st, 2013.

At first, not much was known about their divorce but after the document was obtained, it opened several different aspects. Going by the docs, Martyn wanted his wife Chrissy to receive as little as possible from this divorce.

In addition, Eaden even demanded his 2010 Honda Accord and Wells Fargo Bank account upon splitting from his wife. Moreover, he also asked the court to even revoke Metz’s appeal for spousal support.

Meanwhile, Chrissy didn’t fight the divorce and calmly accepted all of the terms and conditions. The annulment finalized on December 11th, 2015.

Back then, after Chrissy and Martyn split, her mother Denise Hodge said, “Martyn was a nice guy, her first real love. I remember when Chrissy told me they had broken up, but she never really went into why they split, and that was her business.”

Why was Martyn Eaden’s relationship with Chrissy Metz unsuccessful? The Ugly Truth

Several months into their marriage cracks started appearing in their marital life. The sole reason being the difference between their respective nature. While Eaden was a reserved person, Chrissy was loud and outgoing.

Apart from this, when Chrissy took Martyn to meet her folks in Florida, it wasn’t a great experience for both Martyn and the Metz family. In her memoir, This Is Me: Loving the Person You Are Today, Chrissy mentioned he didn’t got along with her family.

This difference of opinion led to greater problems down the line. Chrissy started attending Overeating Anonymous Meeting every now and then and Martyn started hiking with one of his female co-workers. His attachment to his colleague made Chrissy incredibly jealous. Soon, the duo even stopped opening up to each other which added more fuel to the fire.

Then in 2013, Martyn’s parents visited them. It was right after his mom and dad came to meet them that the lovebirds separated. One day when Metz came from one of her friends’ parties, she asked Martyn if he still wants to be with her or not. He answered, “Everything is about you. Chrissy, you are as narcissistic as you are selfish. From the beginning, everything has been about you.”

After divorce, what are the former flames doing now?

Martyn’s whereabouts are unknown as of this moment. After splitting with Chrissy, he literally vanished from the scene. There are no social media accounts associated with his name.

Besides, Chrissy was most recently in a relationship with composer Hal Rosenfeld. They made their relationship official back in 2019. They attended the Golden Globes award function as a couple. But sources stated the pair has been dating since late 2018.

PageSix broke the news of their separation on August 2020. A source close to the actress told the outlet that she is right back in the market.

Aside from Hal, she also dated cameraman Josh Stancil. They first met while working together in the series, This Is Us.

Tags: Chrissy Metz, This Is Us