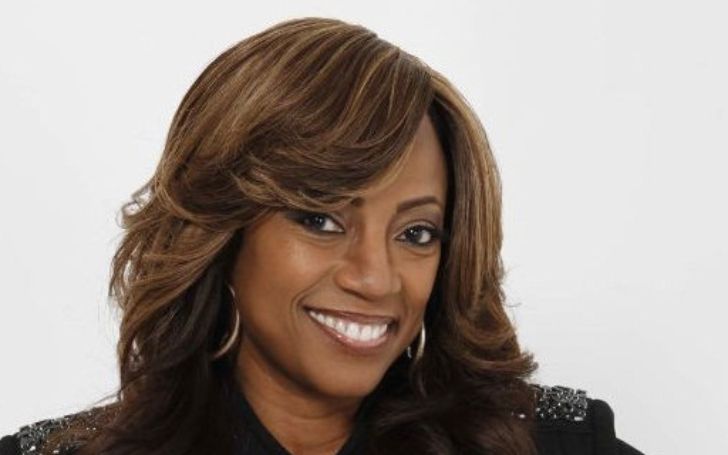 BernNadette Stanis is a Brooklyn-based American actress who started her journey by participating in the pageant, Miss Black America. She is widely famous for her role as Thelma Ann Evans in the series Good Time (1974-1979).

Stanis is also popular because of her relationships. Currently, the actress is married to Kevin Fovin Fontana. Learn if they share any children together. Besides, did you know that BernNadette married thrice before her current husband Kevin?

Well, stick with us to know all the details about BernNadette including her career, net worth, life partner, kids, divorce, and many more.

What Is BernNadette Stanis’ Real Name?

BernNadette Stanis was born Bernadette Stanislaus on December 22, 1953, in Brooklyn, New York, holding the star sign Capricorn. She is also known by the nickname Bern.

Her nationality is American whereas, she belongs to the Afro-American ethnic group. As of 2022, she is 69 years old.

Stanis was born to father Gregory Stanislaus (1924–1991) and mother Eula Stanislaus (1931–2011). She spent her childhood days along with her four siblings in the Brownsville section of Brooklyn.

Despite the fact that she is one of the five kids of her parents, no information about her siblings is available at the moment. Talking more about her family, her paternal grandparents were originally from Carriacou in the Grenadine Islands

What Got BernNadette Stanis Into Acting? Career Highlights

Bren was in her teen when she participated in the pageant Miss Black America as Miss Brooklyn. She eventually earned the first runner-up position in the Miss New York state pageant. The personification of black beauty with her natural acting and graceful dance received opportunities to enter the industry.

Famous For Her Role In ‘Good Times’

The 69-year-old was still in college when she auditioned for the role of Thelma Ann Evans in the series Good Time. Luckily, she earned the role and appeared on the CBS comedy show for a total of 133 episodes.

After receiving fame from her debut performance, she appeared in other television series The Love Boat, What’s Happening Now!, Bustin’ Loose, and The Cosby Show. Again, in 2000, she appeared in the TV movie Hidden Blessings starring Cynda Williams, Marc Gomes, and Kim Fields.

Moreover, her other notable credits include The Engagement: My Phamily BBQ 2, The Adventures of Umbweki, Black Jesus, No Regrets, and The Family Business. Furthermore, the actress gained more appreciation for her portrayal of Dr. Heather in the big-screen N-Secure.

As of now, BrennNadette is all ready for her post-production film Chaaw. In her upcoming project, she would appear as Aunt Thelma sharing the screen alongside Biz Markie, Richard Lawson, and Jimmie Walker.

What Is BernNadette Stanis Fortune In 2022?

Professional since her teenage days, Brooklyn native has so far 26 credits under her name. She mainly earns from her movies, series, and modeling contracts.

According to Celebrity Net Worth, BrenNadette Stains owns a net worth of $6 million in 2022. She reportedly earns thousands of salary for her performance.

Who Is BernNadette Stanis’ Husband? Their Wedding Details

BrenNadette is currently married to her husband Kevin Fovin Fontana for over four decades. However, no exact details of their marriage are unavailable at the moment. According to The Chocolate Voice, the couple wedded in the year 1981.

As IMDb mentioned, ‘The ‘Good Times’ star and her hubby Kevin share two kids: Dior Ravel Fontana and Brittany Rose Fontana together. But the real father of her first child Dior is revealed to be Bren’s former spouse named Overton Bill.

Her family often appears on her SNS, film premieres, and other events. As of now, she is living between California and New York with her spouse and children.

Stains have been married four times in her life. Prior to Kevin, she had three unsuccessful weddings. First of all, she tied the knot with her first husband Thomas Fauntleroy in June 1974. Unfortunately, they divorced in the year 1978.

After that, Bren Nadette met her second husband, Kerwin Darnell Johnson, the owner of Darnell’s nightclub in Brooklyn. She exchanged rings with her spouse in January 1979 in his house.

At the wedding performed by Rev. Walter DeLoatch, Bern’s sister was a maid of honor Debbie Stanislaus. And Edward Swogea served as the best man in the event. Not wanting to stay in a long-distance relationship, Darnell decided to move to California with his wife. Unfortunately, the duo’s relationship did not work and they separated in 1981.

Likewise, her third marriage was to a mechanical engineer Terrence Redd. They wedded on December 27, 1981, and later split. Together, they have a son named Terrence II (born in 1990).

N-Secure star is active on different social networking sites. She is available on Twitter with 585 followers and her verified Facebook has 79,966 followers.

Likewise, Bern is verified on Instagram. Her Insta profile has 139k followers as of July 2022. She is also available on MySpace with 26k connections.