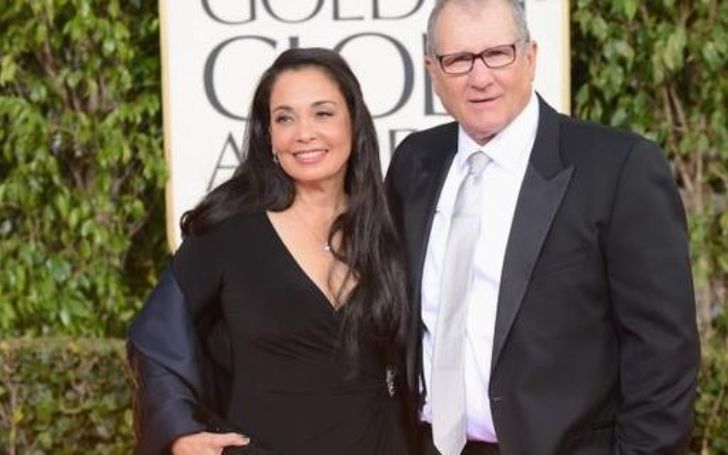 Catherine Rusoff is an actress known for having several cameos in the shows such as Ohara, Highway To Heaven, Midnight Caller, The New Adam-12, and Married… With Children.

She though is better known as the wife of Ed O’Neill, a prominent TV actor known for playing Al Bundy in the Fox hit comedy series, Married With … Children (1987 to 1997). Younger audiences might recognize her partner, O’Neill for playing Jay Prichett on the Emmy-winning ABC sitcom, Modern Family.

The Screen Actor winner husband of Catherine played the patriarch of the family in the series from 2009 to 2020. And while he was married to the Spanish beauty, Sofia Vergara on the show, the actor is the husband of another brunette in real life with whom he has been together since the mid-’80s.

Although O’Neill and Rusoff have already crossed 3 decades as husband and wife with two kids, their relationship hasn’t been without a few conflicting stages. See how the couple managed to keep it sailing despite. En-route also explore the story of Ed’s wife; her origin, career, family, and more.

What Is The Family Background Of Catherine Rusoff?

While it is unclear when the O’Neill family celebrates Catherine Russoff’s birthday, she reportedly was born Catherine “Cathy” Rusoff in 1954 in Teaneck, NJ.

The now 67-year-old semi-retired actress graduated from Teaneck High School in 1972. Other than the aforesaid details, there, however, isn’t much to say about the longtime partner of Ed O’Neill given that she isn’t noticeably active in the media, especially in recent times.

Catherine Rusoff married The Modern Family star, Ed O’Neill in 1986. Ed was then 30, and after deciding to move to New York had found a job in a popular restaurant and bar, O’Neal’s Balloon near Lincoln Center.

He was living in a shared apartment in Hell’s Kitchen with six other actors and took acting classes and every bit part – off-off-Broadway – that came his way. The Ohio-born actor after appearing in some theater plays, in 1980, landed the role of Detective Schreiber alongside Al Pacino in the controversial film Cruising.

Not long after, he would meet the future mother of his children, and fellow actress, Catherine Rusoff. The couple after their marriage would move to Hollywood in 1987 for the show, Married With Children.

Ed’s initial contract was just for six episodes. Though the show would become Fox’s first hit, after which it went on — and on, bringing Rusoff’s husband success, financial security, and further recognition.

Catherine And O’Neill Had Separated Briefly In The Past

While Catherine and Ed managed to keep the divorce off of their marital tie, they did have a few or two hard turns in their courtship.

As per the reports, they had a notable moment of a split in 1989 but had reconciled by the year, 1993. The couple though has never revealed why they separated back then. Further, they also reportedly had a similar nature of coldness in their union in the late 2000s.

In fact, as per some sources, Ed and Catherine at the time also battled for the custody of their children. However, all went down the river when people again started seeing them as a couple in 2012.

When reported in Jan 2016, Rusoff and her husband of over 35 years along with their kids were residing around the Brentwood neighborhood in California.

As mentioned, together, Mr. and Ms. O’Neill are parents to two children, both daughters, Claire and Sophia. They had their first daughter Claire in 1986 and their youngest girl, Sophia in 1998.

Her second daughter, Sophia also has a few or two TV credits. In fact, she briefly appeared in the 2010 short movie On the Block II and 2017’s An American Funeral. She likewise has also made a cameo in season four of Modern Family.

Although O’Neill’s spouse, Rusoff has appeared in a handful of television and film appearances, she is yet to have her breakthrough role.

Two years after marrying the former Pittsburgh Steelers’ free agent, Catherine got her first TV job though for a one-time feature in the series, Ohara as Claudia.

The following year in 1989, she would again have a cameo role in another series, Highway To Heaven as some random Checker. The same year, the mother of two played Susan, once again for a brief moment in the episode, Someone To Love of NBC’s short-lived series, Midnight Caller.

Her next cameo was as Mrs. Aragon in the Syndication’s Police drama show, The New Adam-12. Rusoff’s first-ever big-screen appearance was as Andrea in the 1991 TV movie, The Whereabouts Of Jenny where she acted alongside the likes of her husband, and actors like Mike Farrell, Ellen Crawford, and others.

She next would make two appearances on her husband’s sitcom Married… With Children. Ed’s wife, actress Catherine Rusoff appeared on the series as two different characters.

In the hit Fox comedy show, she first cameoed as Moana Squab in season two, episode “Just Married…With Children” and then Betsy in season six, episode “If Al Had a Hammer.”

What Is She Doing Nowadays?

As of recent, her roles in Married… With Children would turn out to be Catherine’s last known job as an actress.

Post the aforesaid two brief attributes, Rusoff is yet to be seen in any media projects. There is also that significant anonymity as to what she is doing in the present especially, career-wise.

O’Neill had just finished his work on Dogs of War with Christopher Walken and Tom Berenger, with whom he has a strong rapport.

Ed was doing a handful of theater works and subsequent numbers of guest appearances on television. Then came the offer to play the notorious Married With Children in 1986.

The Cruising star would, however, turn down the Al Bundy role without reading it in part to it was Christmas and he didn’t want to fly to the west for a seemingly fruitless audition. Later, his wife, Catherine read the script in their Greenwich Village apartment.

She found the story and premise hilarious and kept on laughing as she continued to read it. Soon after seeing his wife’s reaction, Ed was up for considering the role.

Active in the TVs and films since the ’80s O’Neill is recognized as one of the consistently busiest actors.

He commanded a considerably good salary from Modern Family, which continued to boost his wealth even years after the end of his first lucrative job as Al Bundy in Married With Children.

Rusoff’s partner apparently was the biggest star on the show when Modern Family aired, making more than the rest of the adult cast at $105,000 an episode. Over time, however, the now 75-year-old joined his fellow castmates and started earning the same amount per episode at $500,000.

And with a lifetime net worth of over $65million, it is quite safe to say, the father of Catherine’s daughter is beyond just a rich celebrity.

Who Is Nadia Farmiga? Runs a Business With Her Husband Wilson Costa