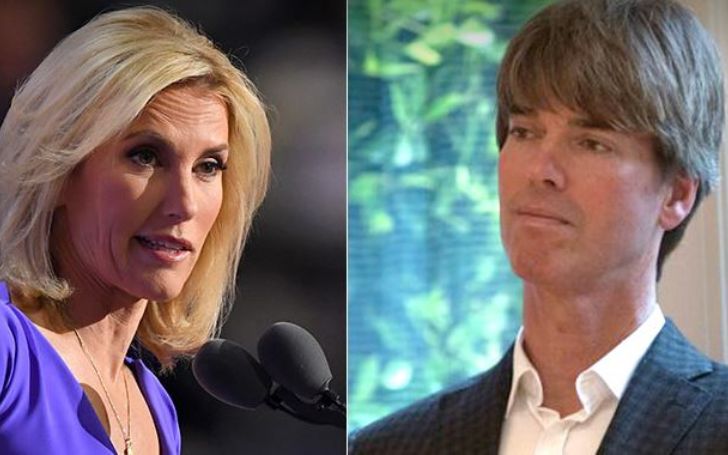 Curtis Ingraham is the brother of Laura Ingraham, a conservative television host who runs The Ingraham Angle on FOX News Channel. Laura has been hosting the show since Oct 2017. While Laura is among the media interest for her right-wing opinions, her brother Curtis is famous for canceling out his conservative Fox News reporter sister’s almost every such view.

Curtis frequently goes to Twitter to criticize his sister, Laura’s take on various subjects she talks about while on air. He has gained attention mostly for his Twitter response to reply to his sister, Laura’s comments regarding geo-political issues including public health, LGBTQ people to drag queens.

Whenever Curtis is in the discussion, his differences with his sister, Laura have been unmissable. They more or less have bad blood between them. Read further about their relationship in the writing that follows. Along the way, also know who Curtis is on his own; his early life, career, and even the answers regarding his marital life.

Ingraham is the son of Anne Caroline (nee Kozak) and James Frederick Ingraham III. Curtis grew up with his sister, Laura in the Glastonbury Center Community, Connecticut.

Curtis once revealed his father kept a copy of Mein Kampf, Hitler’s autobiographical manifesto on the family’s living room shelf.

When disclosing the particular fact, he had said he “cannot stay quiet.”

Ingraham said his father was a Nazi sympathizer. Curtis furthermore said his dad was abusive and alcoholic. He has also implied that his sister’s bitterness may have come from them growing up in a family of anger.

Although Curtis hasn’t revealed the details regarding his birth, according to some records, Laura’s brother was born on December 12, 1956. If that is true, Curtis should be older than Laura and is currently 66 years old.

Curtis Ingraham Sister, Laura Ingraham; He Doesn’t Have A Good Relationship with Her

In light of years of words that Curtis has targeted towards his celebrity sister, it’s easy to see he doesn’t have a good relationship with his sibling, Laura. Apparently, there are several things on which the brother and sister do not agree. For starters, Laura is anti-LGBTQ. Speaking in that regard, the Fox News host once said,

“Family’s first, I know about gay rights, my brother is gay.’ It’s all a sham.”

Laura is also not that fond of immigrants flocking into the US.

However, in Aug 2018, Laura, now age 59, issued a public statement through which she said she and her siblings found it shocking and were said to learn that the media were claiming they didn’t have a good relationship with each other. Laura then also revealed while she and her brother weren’t seeing each other that much, she still loved him and missed him.

Curtis however claims his sister never really acknowledged his sexual orientation and that she has always been a Putin loving who is okay with children dying in Ukraine.

The brother and the sister have also feuded over the subject of gun control. The now 59 years old Laura is critical of calls to ban assault weapons while Curtis is with the people who ask federal lawmakers to pass new restrictions on firearms.

Regarding the same issue, Curtis once also called out his sister for her controversial take on someone who had been the victim of one of the US shooting incidents. Laura had said the gun control activist David Hogg, a survivor of the Parkland, Florida school shooting, was complaining unnecessarily about the rejection of his college applications. She also called him out for his poor grade.

In response, Curtis along with many other liberalists criticized Laura’s on-air comments. The Dartmouth College graduate, however, later apologized for her remarks to Hogg.

Curtis Ingraham Partner Died Of AIDS; Who Is He Married To Now?

At the time, Curtis’ now estranged sister, via an op-ed in the Washington Post, apologized for antigay rhetoric. Through her college newspaper, Laura said her brother and his late partner had given her a better understanding of gay people. She at the time also claimed to have agreeable thoughts on marriage equality.

Over the years, Laura, however, has become more religious and more hostile to the LGBTQ community.

Taking that into consideration, her brother, Curtis, said this is pure hypocrisy from her sister.

While it’s been more than two decades since the death of Richard, it is unknown with whom Curtis currently has a relationship going on. Although he doesn’t miss his chance to speak out against his sister through his Twitter, with respect to personal aspects, he seems completely reserved.

What About His Sister, Laura? Who Is She Married To; Does She Have Children?

Curtis may not have that open to the public personal life but some similar chapter of his sister, Laura’s life has been discussed several times in the media. While Laura has never married, she has dated several high-profile men. The first known man on the list is the liberal pundit, Keith Olbermann. The next is the filmmaker and political commentator Dinesh D’Souza. Following Dinesh, Laura went on to have a relationship with businessman James Reyes. Laura reportedly also dated senator Robert Torricelli.

Although Laura didn’t marry any of the men mentioned above, she is the adoptive mother of three children. Her kids include a girl from Guatemala named Maria Caroline Ingraham and two boys from Russia, namely Michael and Nikolai.

Curtis Ingraham Is A Math Teacher; Where Does He Live?

Curtis is a math teacher based in California. He reportedly teaches at Marin Country Day School. According to his LinkedIn, Curtis has been there since 2006.

Laura’s brother, however, is believed to be residing in Sausalito.

Is He Rich As His Sister, Laura; What Is Each Of Their Net Worths?

Considering the partial secrecy with which Curtis lives, it is quite hard to tell what Laura’s brother has really amassed in terms of wealth or what his financial breakthroughs are.

On the other hand, Curtis’s sister, Laura, who has been one of Fox’s leading hosts for years, is quite a moneyed woman with a net worth in the domain of $40 to $70 million. In fact, by a handful of definitions, Laura may be a super-rich personality who reportedly takes $15 million a year from FOX.

That said, it should be safe to say, between Laura and her brother, Curtis, the former apparently is the richer one.