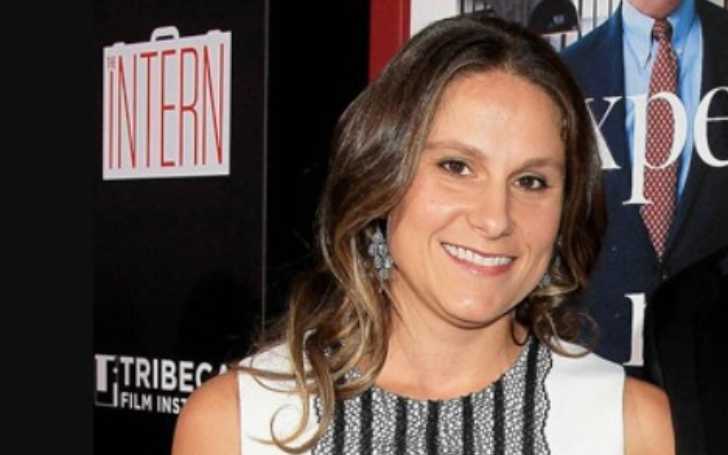 Emma Nesper is a celebrity spouse best known as the senior director, of development, and partnerships at CARE (2018 Oct- 2022 Jun). Among the world, she is famous as the wife of Anders Holm.

Her better half is an American actor, comedian, writer, and producer who has been contributing to the entertainment industry since 2006. In his career span of over 15 years, he is widely famous as one of the stars and co-creators of the sitcom Workaholics (2011–2017).

Today, we will learn about how is the relationship between Emma and her husband Anders. When did they meet and how did they start dating? Also, find out about their wedding and kids. Stay tuned to know actor Anders Holm’s wife Emma Nesper more personally and professionally.

Emma Nesper was born on January 17, 1982, in Evanston, Illinois, the United States, under the birth sign Capricorn.

As of 2022, she is at the age of 40. Her nationality is American and as far as her ethnicity, she belongs to the Caucasian ethnic group.

Nesper completed her primary education at Evanston Township High School, Illinois. Later, she attended the University of Wisconsin-Madison and graduated earning a BA degree in Journalism and Mass Communications.

From 2006 to 2008, Emma attended the University of California, Los Angeles. She has a Master of Arts degree in which she majored in African Studies with an emphasis in History.

What Does Emma Nesper Do? Her Career Achievements

The 40-year-old started her career as an English instructor in 2005. She taught English comprehension courses at University Gaston Berger de Saint-Louis till July 2005. Likewise, she also served as an assistant account executive in ID Media.

Later, Nesper worked with the American Jewish World Service (AJWS) for over 5 years. From Feb 2017 to Aug 2018, she served as a director helping to raise funds in Southern California to support human rights grantmaking and advocacy. The celebrity’s wife then served as a senior director at the organization named CARE (Oct 2018 – Jun 2022).

Though Emma Nesper has her own professional achievements, she is worldwide famous because of her husband Anders Holm. He husband is an American actor, comedian, writer, and producer.

Professional since 2006, the Evanston-born actor started his journey with the television film Mail Order Comedy. Some of his initial works include Crossbows & Mustaches, The Dude’s House, The Intern, Happy Together, Champions, and Inventing Anna.

The versatile star is internationally famous as one of the creators and stars of the Comedy Central show Workaholics (2011–2017). Furthermore, his post-productions projects include The Muppets Mayhem, At Midnight, and About My Father.

Emma Nesper is the Wife Of Anders Holm – How & Where Did They Met?

Emma Nesper and her husband Anders Holm are childhood sweethearts. For the very first time, they met at Evanston Township High School. Though they were classmates, technically their first meeting was at the age of 12 when they went to summer camp together.

They again bumped into each other at cosmic bowling during high school. That was the time when Holm fell for her and even stalked her for a few months. In an interview, remembering those days, he said:

She was wearing these little white shorts, and, you know, in the black light, they pop. So, I was like, “She seems cool from here. And then I stalked her for a few months, and it turned out that she’s a totally respectable, super smart human with a giant brain and not just a pair of white shorts.”

Eventually, Emma’s spouse’s crush on her developed into a strong feeling and he eventually asked her out to become his girlfriend after he became clear she was the one.

When Did They Start Dating? Wedding Details

As mentioned above the couple was teenagers when they first met. They started their relationship with friendship which later turned into a love affair. Officially, the duo began dating in the year 2009 and got engaged privately in the presence of their parents.

Soon after their engagement, the high school sweethearts leveled up their relationship. Emma and Anders married in September 2011. The nuptial was a private affair held at Bluestem Farm, Illinois, where their family, close relatives, and friends were invited.

Emma Nesper Is A Mother Of Two Kids

Like every parent, Emma Nesper was equally happy, excited, and nervous when she received news about her pregnancy. Her wait was over when she along with her husband Anders welcomed their first child on December 19, 2013.

The first-time parents tried really hard to keep their son away from the limelight but Ander could not resist and shared a video on his social networking site on January 6.

Sharing a glimpse of the firstborn, he edited the Instagram video with slow motion effects leading to his son’s crying echo sounding like rumbling.

The couple’s first child is now 8 years old and he has an elder sibling. As of now, his parents have not shared any details about him and his brother.

Where Does Emma Nesper Holm Live?

The celebrity spouse is living a legit life with her husband and kids. Currently, the family of four resides in the Mediterranean-style villa that spans more than 3,800 square feet worth $3.5 million in South Pasadena, California.

Emma has gathered a decent sum as a communication and fundraising professional with 15 years of experience in international non-profit organizations. As of 2022, she reportedly owns a fortune of $2 million.

On the other hand, her better half also grabs a hefty sum through his films, TV shows, brand endorsements, sponsorship, and commercial ads. Nesper’s celebrity husband, Anders Holm has an estimated net worth of $7 million in 2022, according to Celebrity Net Worth.