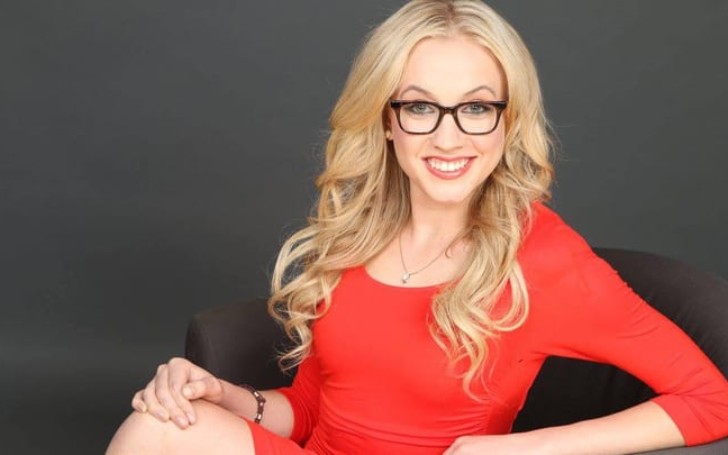 Katherine Clare Timpf, famously known as Kat Timpf, is the star of The Greg Gutfeld Show. Besides, the Fox Nation host is happily in a relationship with her boyfriend, who is a US Army Veteran. In fact, the successful journalist Kat is also already engaged to her bf.

Now the big question that arises is if the couple has tied the knot or not? Curious, huh! Well, we’re here to find that out!

Apart from that, you might wanna know more about her partner, Cameron. How did they first meet? Let’s find out here today!

Known all around the country for her lively, animated, and humorous personality, it’s surprising to know that Kat’s boyfriend isn’t a comedian, but a Veteran.

If you’ve been following Kat for some time now then surely the name, Cameron bumped here and there often.

Generally, Kat is open about her personal life but till now, she is yet to reveal when did she started dating Cameron. Nevertheless, fans are more than happy to hear she is in a sound relationship.

Kat and Cameron are what you call, a bubbly pair with no care of the world. Kat being Kat shares a lot of weird yet funny pictures with her better half. Their relationship is definitely in for the long haul.

The Sincerely, Kat host knows how to make fun of her partner and how to respect him at the same time.

For those of you who just became Kat’s fans, this may come out as a surprise that she is happily married to her boyfriend, Cameron. The long-term pair exchanged vows on May 1st, 2021 in an extravagant ceremony. The nuptials took place in New York City.

For the beautiful ceremony, Kat wore a beautiful white gown designed specially by Kleinfield. Apart from that, her hairstyle and make-up were done by Roman Kusayev and Roman K. Salon, and Brandalyn Fulton Williams respectively. As for the wedding rings, they ordered them from Greene & Co.

Initially, the pair had been engaged in 2020. Kat revealed her engagement on The Greg Gutfeld Show on August 1, 2020.

She also shared the news on her Twitter. Check out the clip here.

The news might have come as a shock for many, but for some, it is a relief. Why? Well, at least they don’t have to keep it a secret anymore.

Kat and Cameron are Relationship Goals: See the Pictures

It wouldn’t be a far-fetched thing to say that Kat and Cameron are literal goals. The banter they play with each other on social media really does help blew off steam from our busy lives.

Take a look at the couple dressed as a dad and his daughter.

And like any other pairs, the duo does have fights but it all cools down quickly, thanks to Cameron’s service. One time, she tweeted about their catfight.

Kat once called fiance her hubby

The columnist surprised her fans after she shared a message on her Instagram on the New Year, 2020. In the photo, Kat mentioned Cameron as her ‘hubby,’ which raised many eyebrows.

Since then, there has been no mention of their marriage. It is safe to say, she just called him ‘hubby’ on a wimp.

Regardless, now that they been married, she can call him hubby all day if she wants.

As many of you already had a slight idea, Cameron James Friscia is a United States veteran. He enlisted at the U.S. Military Academy West Point shortly after the September 11 attack on the Twin Towers.

Though the exact tenure of his service is not known, it looks like he served at least 6 years.

During his time serving at the US Army, he worked as an Assistant Operations Officer, Executive Assistant to the Brigade Commander, Company Executive Officer, Infantry Platoon Leader, and also a Student at the Infantry Officer Basic Course.

Besides, during his time as a Senior cadet, he also tried his hands in lacrosse. The 34-year-old stands at a height of 6ft.

Born on August 10th, 1986, he graduated with a Bachelor of Science (B.S.) degree from the academy. As for his early education, he went to Choate Rosemary Hall and Hackley School.

After leaving the army, he started working as an Intern at the Bank of America in 2014. He worked there for a year before moving to Merrill Lynch Pierce Fenner & Smith Inc as a Broker.

Timpf had a boyfriend during her teens. Their relationship was sailing smoothly before her parents asked her to break up with him. Why would they do that?

Apparently, her ex had a piercing on his tongue, which didn’t bode well with her mom and dad. Upon finding out about her lover, they grounded her for two weeks.

Moreover, her parents even called her former flames’ residence and asked him to never see Kat again.

The father-daughter duo talked about this incident vividly in a video segment!