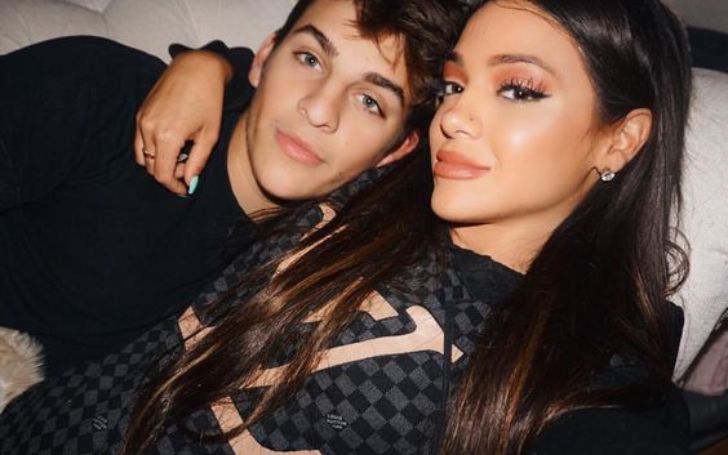 For fans, Gabi DeMartino and her relationship with her boyfriend, Collin Vogt is something they want to see till the end. And honestly, it looks like the pair isn’t going to disappoint the fandom.

Likewise, Gabi and Collin are already talking about marriage so they might just walk down the aisle sooner than expected.

Today let us take a close look at her personal life and also find out more about the cheating rumor that plagued Gabi’s life some time ago.

Gabi and Collin started dating back in 2015. The pair first met when Collin, 23, attended a party where Gabi was also a guest. The party took place at a Beach.

Collin being a man decided to introduce himself to Gabi but as soon as he got near her, she immediately turned away. At the time, Collin felt a bit weird as generally, one would say hi whenever meeting someone new.

But wait, don’t call her rude, just yet.

As it turns out, Gabi wanted to put a little show of her peachy derriere in order to impress him. So, there you have it, Gabi wasn’t rude, she just wanted to attract Collin.

How old is Gabi DeMartino boyfriend?

Gabi and Colin are Engaged: He Proposed to her and not the other way round

The 24-year-old YouTuber is famous for her open personality and she literally shocked everyone after proposing to her bae. In a video, uploaded in February 2020, the Dance Camp star got down on her knees and asked if Collin will marry her. The video was uploaded a day before Collin’s birthday.

But sorry to burst your bubbles you guys as she was just pranking her boyfriend, nothing else.

Nevertheless, Collin was blushing and he said to his girlfriend that he will definitely marry her, but he will be the one asking her and not the other way round. And so he did. Yes, Colin proposed to his girlfriend of five years on Thanksgiving 2020. Though they got engaged in November 2020, Gabi only announced the news in January 2021 by sharing a group of pictures.

From the pictures, we can tell the betrothed couple is ecstatic. From January 2021, they will now move forward as an engaged couple. As for their wedding, well, the pair will take some time before taking such a big decision. Regardless, the pair once talked about this topic. Let’s find out their stance on their potential future wedding.

Earlier this year in February, Gabi shared a Q&A video with her boyfriend from their trip to the Bahamas. Furthermore, the lovebirds mentioned a little bit about their plans for marriage and kids.

One of the fans asked as to when does the pair see themself get married, for which the duo specifically said, ‘very shortly.’ At the same time, they also spilled the beans at their wedding and honeymoon destination.

Gabi said they will tie the knot someplace hot, like an island, and fly off for a cool honeymoon. Speaking of honeymoon, Collin mentioned, “We were thinking like a ski lodge or something. You know those igloos that have a see-through roof? Something like that.”

Wait, their fantasy isn’t over yet. The lovebirds also want to see the northern lights from their see-through roof.

In the same video, Gabi and Collin mentioned their trip in the summer to an island. If all goes well, they will visit Bermuda and stay there for a month. But given the Coronavirus, it looks like their plan didn’t succeed.

Nevertheless, as soon as fans came to know about their upcoming getaway, they started speculating about Collin and Gabi’s marriage plan at the exotic destination. In addition, the location also further fueled the fire as the location is generally preferred by those couples who want to get married.

Well, be that as it may, their plans have all been ruined due to COVID-19. It looks like Gabi and Collin’s nuptials have to wait.

Gabi DeMartino and Brandon Grupe: Reportedly cheated on him with Collin

Before officially dating Collin, the Ariana Grande look-alike was in a relationship with, Brandon Grupe. For two years, the pair even had a joint account on YouTube.

Then, out of the blue, Gabi wanted a break from their relationship. Back then, she told her boyfriend Brandon that she wanted to see some other people. Regardless of Brandon’s disapproval, she cozied up with her now-boyfriend, Collin. Because of this, people even called Gabi a cheater.

Although Gabi is regretful of how things ended between her and Brandon, she believes everything happens for a reason. The social media star is now leading a happy relationship with her beau Collin.