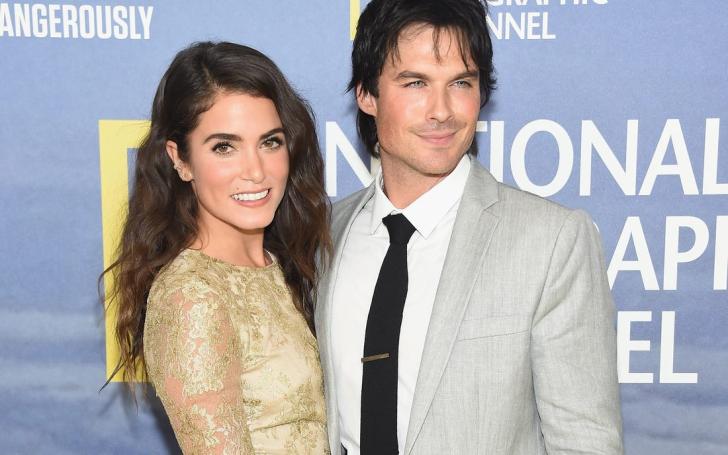 The handsome Ian Somerhalder has been in marital bliss since 2015. The Vampire Diaries star lives a rather simple life with his wife, kid, and their few pets.

Let us find out more about Ian’s personal life and also take an insight into his relationship with his ex-girlfriend, Nina Dobrev.

Being as good-looking as Ian means you’ve had a lot of affairs here and there and it seems true as well. However, despite his number of relationships, the actor is now settled for good.

Nikki looked majestic in a Claire Pettibone fishtail gown with lace sleeves, whereas, her groom smashed it by wearing an all-white suit. Only Ian can pull off such a type of dress!

Meanwhile, her close friend, Spy Kids star Alexa Vega served as the matron of honor at her wedding.

This was the first matrimonial for Ian, on the other hand, Nikki was previously married to Paul McDonald, an American singer

At the time, Ian and Nikki opted out of inviting any media outlets, nevertheless, their wedding photos were later posted online.

Besides, Somerhalder even tweeted on their big day. He wrote, “Most beautiful morning ever.”

We’ve talked about their nuptials, but how did all begin for the pair? Let’s take a look!

How it all Began between Mr. and Mrs. Somerhalder

It was back in the summer of 2014 when Ian and Nikki first sparked romance rumors. Back then, paparazzi spotted them getting cozy as they visited L.A. Farmers’ Market.

As reported by the onlookers, the lovebirds sipped coffee as they got affectionate whilst shopping at Sherman Oaks.

Both of them knew each other for a long time but it really took a while before things turned romantic between the two.

Spotted Kissing a Couple of Months Later after Initial Meeting

Just a few weeks after initial spotting, Ian and Nikki were spotted getting rather intimate at the Entertainment Weekly party at Comic-Con in July 2014.

They arrived together at the Hard Rock Hotel in the middle of the night. Inside, they couldn’t get their hands off each other as they had a steamy makeout session.

After a mere six months into dating, the 41-year-old decided to take his relationship up a notch. He proposed to his then-girlfriend on February 15, 2015, and they got engaged. Ian gave his girlfriend a floral-inspired ring.

Meanwhile, Nikki was over the moon after getting engaged and maintained at the time about how much she adores the ring.

She told PEOPLE, “It’s so gorgeous, and I’m very lucky for many reasons, but I look at it every day and just think, Wow. I don’t even know what to say.”

The Somerhalders became biological parents for the first time in 2017. They welcomed a daughter on July 25 and named her Bodhi Soleil Reed Somerhalder.

It was a huge moment for the duo, as both of them experienced the feeling for the first time.

My two forever Valentines… I love you both so very much. Thank you for making the the luckiest guy on the planet… Happy Valentine’s Day 😉

At first, Niki announced the big news to her Instagram followers in May. In an incredible post, wherein she wore her own sustainable clothing line-up, Bayou With Love dress, she wrote,

“I know you, but only because I feel you. How is it possible to love someone so much already? All I know for sure is it’s the strongest feeling I’ve ever felt. We’ve been sharing this body for quite some time, and we’ve already experienced so much together. We can’t wait to meet you…Love your parents.”

Bodhi might be Ian and Nikki’s first child, they still have a few other kids playing at their residence.

The real reason behind the strong bond between Ian and Nikki is their mutual love for animals.

At the beginning of their lovey-dovey, Nikki even talked about how they instantly bonded over their shared interests towards animals.

The duo has a variety of pets at their house. From felines to dogs to horses, you name it.

That smile… All I had to do was ask “Joe can you give your dad a smile?” This is what I got. They hear us. They understand us. Animals know so much more than we give them credit for. They are truly amazing. Kids and animals absorb ALL that we put out. What kind of energy are you putting out there? I try daily, even under incredible stress to smile and put out positive energy. It goes a long way I believe… No filter

Furthermore, during the COVID-19 lockdown, the family of three spent their entire time with their ‘kiddos,’ as they like to call them.

Ian even founded the Ian Somerhalder Organization, which focuses on empowering, educating, and collaborating with society to positively impact planets and their creatures.

Before his marriage with Nikki, Ian was in a relationship with actress, Nina Dobrev. The duo officially started going out in 2011, after first coming across in 2009.

Although the former flames came official with their affair in 2011, it is reported they had hooked up some time ago.

In 2012, Nina told Seventeen Magazine, how she made an exception about dating Ian, one of her co-star. She stated,

“I didn’t want to be dating one of my costars — my goal on the show was to be professional. But sometimes you can’t help who you have a connection with, and you can only fight it for so long — which I did for a really, really long time.”

Despite the chemistry they shared, their relationship couldn’t hold out for long and they broke up in 2013.

His Other Past Affairs

In early 2000, he started dating his Young Americans co-star, Kate Bosworth. The couple reportedly went out in 2002.

Afterward, he had a fling with Nicky Hilton in 2004. It lasted for a few months. Then from 2006 to 2007, he was in a relationship with Maggie Grace. They co-starred in Lost.