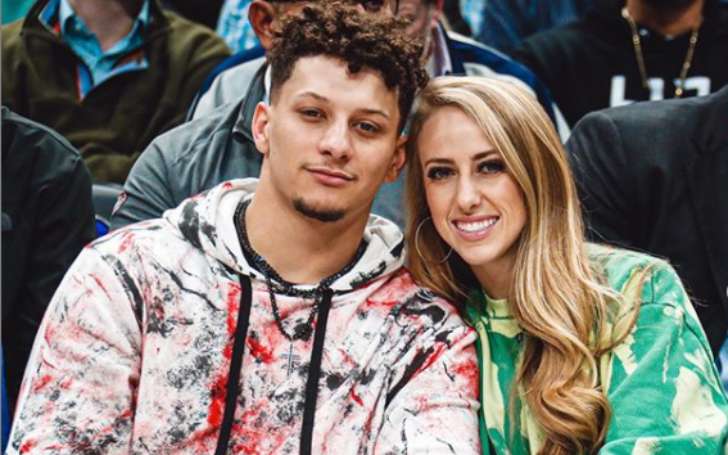 One of the best NFL youngsters out there Patrick Mahomes is taking the football world by storm. The Quarterback for Kansas City Chiefs took his team to Superbowl glory in 2020.

The Sportstar enjoys tremendous success all because of his hard work but there are a few people who really pushed him. His mother Randi Mahomes is one, and the second is surely his girlfriend of many years, Brittany Matthews.

His seasoned fans know all about his personal but new fans are keen to know. For starters, they keep on asking questions like is Patrick Mahomes married? Has he turned his gf into a wife? Find out all the answers here including his relationship timeline.

Let’s get this question out of the way. No, as of 2020, he is not married. And rest assured, nor will he tie the knot anytime soon, well, at least not until, his baby comes into the world. Yes, the 6ft 3in tall hunk is going to be a father in 2021. More on this later.

So now you know he is not in a marital relationship so queries regarding his wife are pretty much self-explanatory. Having said that, Patrick does have a girlfriend with whom he has been together since high school and she is most probably going to be his future wife.

So who is Patrick’s soon t0-be-wife? They go way back

As of 2020, Patrick’s girlfriend is Brittany Matthews. They’ve been in a committed relationship for more than a decade. They started going out since Mahomes was in grade 10th.

Both of them first came across while attending Whitehouse High School, in Whitehouse, Texas. Although Patrick and Brittany are of the same age, she graduated college one year earlier than him.

When did Patrick and his lover got engaged?

Patrick got engaged to his girlfriend of more than a decade on September 1st, 2020. He decided to pop the big question right after he won the Superbowl with Kansas Chiefs.

Mahomes planned the proposal during the Super Bowl Ring ceremony at Arrowhead Stadium. Inside one of the VIP suites, the athlete had set-up flowers all over and a ‘Will you marry me?’ sign.

The night certainly resulted in rings on both, Patrick and Brittany’s finger!

As for announcing, both of them announced the great news to their respective fans on Instagram.

9.1.2020❤️ On a day that was meant to celebrate you, you turned it into celebrating us. It’s always us, it’s always you and me. The words you looked into my eyes and said to me at this moment, will NEVER leave my mind! You made this day perfect, you took my entire breath away and I could not have imagined anything better. I love you, forever and always! Cheers to spending our lifetime together and an inseparable bond🎉🥂💕

The betrothed couple is most definitely planning for their upcoming wedding, however, the whole idea of a nuptial might be on the backburner for now. Why? Well, because the pair is expecting a new member of their household.

Patrick and Brittany are going to welcome a baby in 2021

Just a few weeks after announcing their engagement, on September 29th, Patrick revealed his partner is pregnant. Brittany took to her Instagram account to give the good news to her fans.

In the picture, Patrick is hugging his girlfriend from behind as Brittany holds a picture of the ultrasound. The news came just five days after her beau defeated the Baltimore Ravens by scoring five touchdowns.

Several decades or centuries in the future many will remember the dreaded year that 2020 has been. Regardless, for some, it is turning out to be one of the best years.

Similar is the case for the Quarterback. Not only did he helped the Chiefs end their 50-year long Superbowl drought he also put the ring to his relationship. Moreover, to top it all off, he and his soon-to-be spouse are also expecting their first kid.

How about that for a year!

The duo once endured a long-distance relationship

Their relationship looks all sunshine and rainbows but the pair had to work really hard to make it work. Let’s go back down memory lane.

So after finishing high school Brittany studied Kinesiology at the University of Texas, Tyler. Upon graduating from college in 2017, Brittanny who is an athlete just like her boyfriend joined a soccer team in Iceland.

Four years after she left playing soccer, she now had the opportunity to become a pro soccer player. In June 2017, she reached the Scandinavian nation and joined a team of UMF Afturelding/Fram. At the same time, Patrick too was drafted first round by Kansas Chiefs and he also moved away from Texas to the Midwestern state.

If Patrick had an ordinary bond with Matthews then surely they might’ve considered calling it quits. But their relationship was way deeper than one can even comprehend.

They pursued a long-distance relationship for a year before Brittany came back in 2017 after winning the league in Iceland.

What does Patrick Mahomes’ girlfriend do for a living?

Brittany is a health freak. If you’ve been following her on Instagram, then surely you’ve seen how much of a health freak she is. Literally every second or third post she shares is somehow related to fitness.

During the Coronavirues Pandemic, she even started an At-Home Workout series which she shared on her Instagram. Her beau Patrick also featured on some of her videos.

Besides, she is also a certified fitness trainer and runs the website Brittany Lynne Fitness. Her website provides all the necessary workout routines and tips for those who are willing to work hard for their body. She even offers fitness merchandise and training programs which she personally crafted.