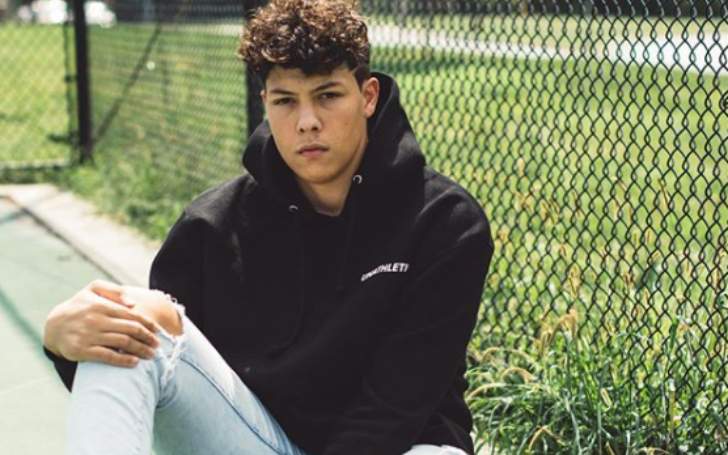 Jackson Mahomes is an American social media star who is famous for his TikToks. He is also recognized as the brother of NFL star Patrick Mahomes.

Jack used to be a great basketball player in high school but he later quit in order to come out of his elder brother’s shadow. After years and years of struggle, he has finally been able to become someone else other than just Patrick’s bro.

Today we’re going to take a close look at Jackson’s life and find out all about his life. We will also discuss his famous family, his relationship with his parents and siblings, why he left sports?

Jackson is the youngest son of Randi and Pat Mahomes Sr.

Born on May 15, 2000, in Texas, Jackson is the second child between former pair Randi Mahomes and Pat. His mother and father divorced in 2006 due to irreconcilable differences.

Jackson’s mom is a caucasian while his father is African-American. He belongs to mixed-ethnicity.

Jackson grew up in Tyler, Texas, and studied at the Whitehouse High School in Whitehouse. Growing up, he also excelled in sports just like father and brother. He tried his hands in Football, Baseball, and even Basketball.

He last appeared in the major league in 2003 after which he became a minor league journeyman. Pat played in several minor leagues, both in the US and Japan.

Jackson’s brother Patrick Mahomes II is a renowned NFL player: He has a sister as well

Jackson has one older brother’ Patrick, born September 17th, 1995. He plays for the Kansas City Chief as a quarterback. Patrick took the Chief’s to Superbowl glory in 2020. They won their second Superbowl after a 50-year long drought. Chiefs had won their first championship in 1970.

Patrick is currently engaged to be married to his girlfriend Brittany Matthews. They are also expecting their first child in 2021. Jackson is quite close to Brittany and even calls her his best friend. She often appears in his TikTok videos as well.

In addition to a brother, Jackson also has one sister named Mia Randall born on July 12th, 2011. She is currently nine-years-old. There is no information as to who is the biological father of Mia.

Jackson played Basketball and Football in high school: He even had an offer from Stephen F. Austin Basketball Team

During his time in high school, he tried his hands in multiple sports. Just like his dad and brother, he played Baseball, Basketball, and Football.

He quit football as he didn’t like the physicality of it and because his brother has already excelled in the sport. He also decided to move away from Baseball because he thought his body is not built for the sport.

It was then when he decided to pursue Basketball solely. He was a terrific player and for one season was the leading scorer of the Whitehouse. His tall 6ft 6in frame helped him in the sports.

Its a fact that if a person is famous then their whole family members are also recognized in the media. For the rest of their lives, they will be labeled as XYZ’s son or mother, or brother.

The same thing happened to Jackson, who was known across the country as Patrick’s younger sibling. However, Jackson never really liked to live under Patrick’s shadow. He wanted people to recognize him through his own hard work.

Unfortunately, throughout middle and high school, everyone used to say, “Oh, look, it’s Patrick Mahomes’ brother.” Even when he was playing basketball, the opponents used to jeer him and say, “You’re not Patrick!”

To be honest, no one wants a life like this. Constantly being compared to your sibling and on top of that, whenever you are not able to live up to the expectation, they just call you out as if you’re never meant to fail.

“It’s hard at times because everybody’s asking for something. You’ve got to act better and be respectful. Your name is out there. Everybody knows who you are and what your family is.”

He is no longer Patrick’ brother but Jackson from TikTok

After saying goodbye to his sports career, Jackson started creating Tiktok videos. Soon his video started getting a lot of attention and as of 2020, he has around 70k followers and 20 million likes on the video-sharing platform.

He became a sensation in the social media platform, a stark contrast from what his family is renowned for, but whatever. His fame started reaching so much height that one time while attending a football game, a group of people approached him and recognized him as Jackson from TikTok.

Jackson talked about the incident in his YouTube video. He said, “I’ll never forget the first time that I was at a football game or at a store when people came up to me noticing me as Jackson from TikTok and not just Patrick Mahomes’ brother.”

As of 2020, Jackson has over 160k followers on Instagram and around 20k subscribers on YouTube as well. We can say he is slowly transitioning into a big social media celebrity.

Jackson gained a lot of unwanted attention from the haters after his TikToks from his brother’s football game went viral. He generally shares a lot of dancing videos from the sidelines which many touts as ‘cringeworthy.’ What’s more, there were many people who even made remarks on his sexuality.

Nevertheless, he remained unfazed. He showed his defiance against the haters by participated in the Bulletproof challenge. The video he shared on TikTok read, “You think you can hurt my feelings. Im the only boy in my family that doesnt play sports (sic).”

Despite all the backlash, Jackson is doing great in his career which is quite the opposite of what people expected of him. But hey, as long as you’re happy, you can do anything.

Is Jackson Mahomes dating someone? What is his sexuality?

As of 2020, he is not in a relationship with anybody. The charming social media star has never been linked with anybody.

Now talking about his sexual orientation, there are numerous tabloids claiming he might be gay. Regardless of their claims, Jackson is yet to come out of the closet.

Besides, many of his haters also call him gay all because of his liking towards creating videos on TikTok. If you look at the comment section of his YouTube or Instagram, you’ll see these haters trying to take down his whole confidence.

Is Patrick Mahomes Married? Who is his Wife? His Love Life in detail