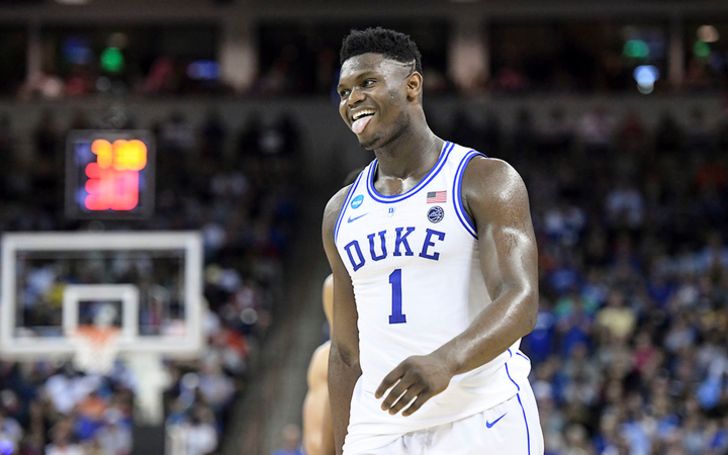 Being a star athlete is quite demanding and many times, it will break your relationship with your girlfriend due to the commitment. The same incident happened with Zion Williamson.

The NBA prodigy was dating his high school girlfriend before his decision to further commit to Basketball separated them. Now the big question is, is he dating anyone now? Who is Zion Williamson’s girlfriend?

Find out all the information surrounding his personal life, from his past affairs to current link-ups.

Who is Zion Williamson Girlfriend 2021?

As of now, Zion is single and not in a relationship. Since calling it quits with his girlfriend Tiana, he hasn’t been linked with anyone, except with one person(more on that later).

The Pelican star is relishing his single relationship status. Besides, NBA stars are usually known for their open dating life so it’s safe to say he isn’t hiding a lover, either.

There might not be a lot going on in his personal life, but his professional life is growing each day. He currently plays as Power Forward for New Orleans Pelicans. Zion recently teamed up with Nike AirJordan and created a new shoe.

The NBA prodigy reportedly dated a girl named Tiana White. The lovebirds apparently went to the same high school, Spartanburg Day High School. According to reports, the two went on a prom date together.

Just like Zion, his former girlfriend, Tiana too was an athlete at high school and participated in various field events. She was also a cheerleader. It is quite apparent why the two dated one another as both of them share similar interests.

The pair made their relationship official when both of them indirectly confirmed it via Instagram live. In the video, White asked if Zion has a girlfriend or not for which he asked a rhetorical question, Do I? with a smile.

The pair even used to follow each other on social media handles but as of this moment, they no longer follow one another. Soon after high school, Zion was drafted to New Orleans Pelicans and he relocated to a different location.

Zion Broke-up with Tiana Due to Long Distance

As with all the star athletes, maintaining a long-distance relationship while being on the edge 24/7 can be painful. Similarly, distance came between Zion and Tianna’s relationship and the former flames parted ways, for good.

Moreover, all the photos of White and Williamson have since been deleted from social media which means they are definitely not dating. Tiana’s Instagram handle is private so who knows what is going on there, but as far as we know, the girlfriend and boyfriend are no longer together.

When you are a big star like Zion then there are bound to be a lot of rumors regarding your linkups with celebs. Likewise, in early 2019, there were rumors that Zion might have hooked up with actress, Peyton List.

Speculations started making rounds after Zion shared a rather cozy picture with Peyton on his Instagram handle. He wrote on the picture, “It was dope meeting a Disney ⭐️, thanks for supporting the Blue Devils.”

Furthermore, at the time, Peyton was also single after her break-up with Cameron Monaghan in January of 2019.

The break-up served as the catalyst as it further solidified the rumors. Both of them never really addressed the situation, so it might be rumors after all and nothing else.

In 2019, around the same time, he was linked with Peyton, Zion came into controversy when he reportedly slid into a girl’s dm.

So the story went, while Zion was waiting in his hotel room, he sent a thirsty Snapchat to a girl. The female later turned out to be a UNC cheerleader.

In the photo, which the girl later revealed, the 6ft 9in Basketballer shared a selfie of himself in which he wrote, ‘I have a big room, come sleep with me.’

Pretty bold, even for Zion’s standard, don’t you think?!

Well, things have since calmed down and Zion pretty sure has been treading carefully in the dating scene.

For more entertainment news, make sure to follow CelebSuburb!!!