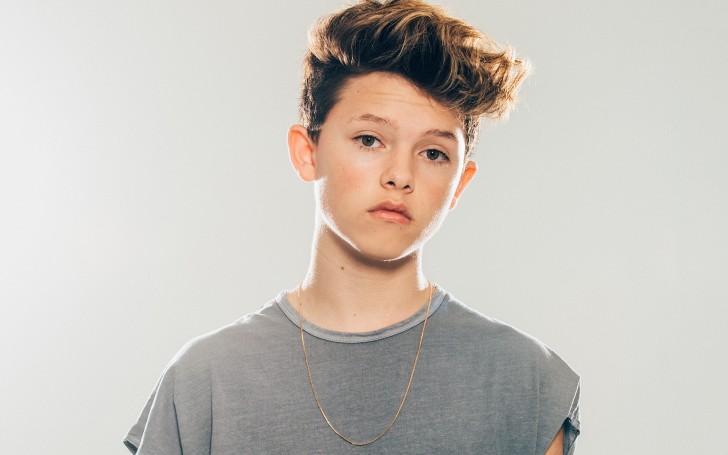 Besides, his relationship status is something many would like to know along with information on his parents and sibling. We will also find out if Jacob is dating, and all about his love life as well.

Is Jacob Sartorius Adopted? Who are his parents?

Jacob is the youngest son of mom, Pat Sartorius (nee Hanscom), and dad, Rolf Sartorius. The Sartorius family adopted him when he was just an infant.  Though born in Tulsa, he grew up with his family in Reston, Virginia.

If you’ve been following Jacob for some time now then definitely you know the truth about his parents. However, if you don’t, then we’ve got you covered.

The truth is when Jacob was born his biological parents were not able to take care of him because of which they put him up for adoption, hoping he’d get a better life.

The husband-wife duo Rolf and Pat are the owners of Social Impact, a consulting firm. The goal of their firm is to help integrate foreign aid into the recipient’s country’s culture.

It was back in 1996 when they decided to form a company that will help in designing foreign aid in such a manner that it will responsibly involve the local stakeholders. As opposed to imposing the social aid programs, assimilating it with the locals will help realize its true intentions.

Prior to working here, Rolf worked as an international development consultant, whereas, his wife Pat was in the State Department, specializing in multilateral security negotiations.

Jacob Sartorius Siblings: He Has a Sister?

Yes, Jacob has one sister, Caroline Sartorius. The brother and sister share a deep and affectionate bond with each other.

@jacobsartorius VERY proud of you!!! xoxo

Unlike her famous bro, Caroline remains outside of the entertainment world, till now. As for her education, she graduated from the University of Virginia in 2019.

What School did Jacob go to?

The 17-year-old changed school multiple times because of bullying. One of those school names is Flint High School in Oakton, Virginia.

In 2019, the TikTok star made a startling revelation when he opened up about his mental health issues. He maintained at the time that he takes anti-depressants and has been going to therapy since the age of 11.

According to him, taking anti-depressants wasn’t really his choice but because of society. As we all know, the singer divulged numerous times about being bullied at school.

In fact, he started her career in order to escape from the harsh realities. You all remember his first video on the Vine right, it was all about anti-bullying. The video became viral instantly making Jacob a star overnight.

Unfortunately, his fame didn’t stop the bullying as it got worse after he joined the school. This very reason led Sartorius to change schools three times in 2015.

Jacob’s red cheeks are something a lot of us noticed but is he just naturally reddish or does he have a disease? Well, it turns out, he does have a disease called Rosacea.

In this skin condition, a person’s face shows a lot of red blood vessels leading it to look red. Moreover, this condition produces red bumps all over the face.

Generally, the disease isn’t permanent and goes away with time.

Who is Jacob Sartorius Dating? Is Baby Ariel his Girlfriend?

At the moment, Jacob is apparently single, so good news for his fans girls. Even so, fans recently linked him with the TikTok star Baby Ariel. Pretty sure, you’ve heard the rumors right!

It is only natural for fans to link a fellow social media personality with another equally famous star.

Regardless of all the speculation, the 19-year-old shut down the rumor mill after she posted a Q&A video. In the video, she openly answered the question, “Are you and Jacob Sartorius dating?” and said,

You can watch the video here!

Once again, Baby Ariel is not Jacob’s girlfriend. He is rather single at present.

Jacob Sartorius & Millie Bobby Brown: Why did they broke-up?

Previously, Jacob had been in a relationship with a famed actress. Of all the rumored affairs, his most famous romance is with the actor-girlfriend Millie Bobby Brown.

The adorable pair started dating in 2017 and went public with their relationship in 2018. Millie, later on, confirmed their romance when she wished her beau on the eve of Valentine’s Day.

Nevertheless, their relationship was a short one and they called it quits in July 2018. Even though the reason behind their break-up is not known, reports say it was a mutual one. They still remain good friends.

When you’re as big a star as Jacob, then every now and then news about your intimate life is thrown a bit loosely. Before going out with Millie, he was also linked with Stuck In The Middle star, Jenna Ortega. He dated now ex-girlfriend Jenna in 2017.

Rumors first started about their relationship when Jacob released a new song titled, Chapstick which Jenna featured as his love interest. But what really buzzed the internet was the kiss they shared in the video. None of them confirmed nor denied their affair.

He was also linked with Dance Moms star Maddie Ziegler.

Does Jacob Sartorius have a Tattoo?

In 2019, Jacob surprised his fans when he revealed a tattoo he inked. According to the now-deleted Instagram post, he etched a king’s crown slightly behind his ears.

He stated at the time that the inspiration behind his tattoo was NBA star, Lebron James. Jacob once read a book about how Lebron overcame his inner and outer demons and become the king that he is today.

The metaphor literally glued to Sartorius’s mind and he decided to etch the crown.