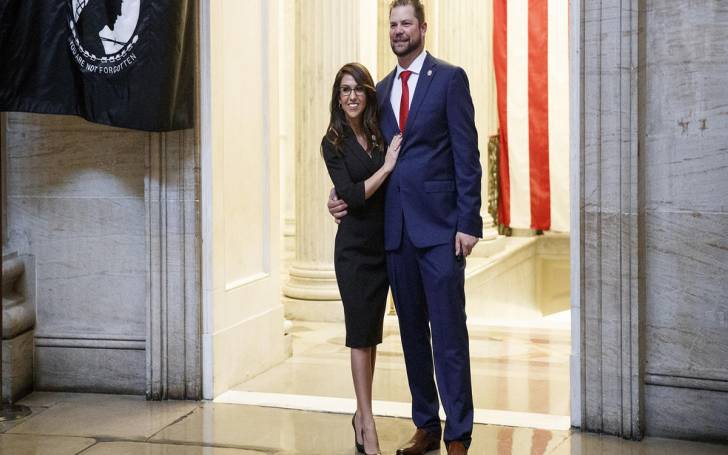 Jayson Boebert is famous for being the husband of Republican Congresswoman Lauren Boebert. He used to work as a well site supervisor for Chesapeake Energy. On the other hand, his wife Lauren is a representative of Colorado’s 3rd District in the United States Congress.

Similarly, he is also infamous for spending time in jail because of his lewd acts in the bowling alley, but his wife thinks otherwise. So what happened that day? What does Lauren have to say about her husband’s act? Many curious minds want to know the truth behind such an incident.

So, let’s put an end to this here as in this article we will answer all these questions and find out all there is to know about Jayson Boebert, Lauren Boebert’s hubby.

He was born in Las Vagas, Nevada on December 06, 1980. However, there are no details regarding his parents. On the other hand, his star sign is Sagittarius and he is 41 years old as of 2022.

Jayson is one of two sons between the late Michele Boebert and her partner. His brother’s name is Joshua Boebert, who according to his LinkedIn account works as an Electronic Technician Lead in Arcata Associates.

Talking about his ethnical background he belongs to the Caucasian Race and is American as per his nationality. Similarly, he graduated from the College of Southern Nevada.

Jayson Steven Boebert according to his LinkedIn account is a former Well site supervisor at Chesapeake Energy. Similarly, he also worked as a roughneck for Nabors Drilling and operated Boebert Consulting LLC from 2012 to 2019.

Apart from his career in the oil gas industry, Boebert currently works with his wife operating their restaurant, Shooters Grill in Colorado. Similarly, he along with his wife and four children reside in their beautiful home in Silt, Colorado, the United States.

Jayson Boebert once exposed himself to minors in a Bowling Alley

In January of 2004, authorities arrested Lauren’s spouse for lewd behavior. He reportedly showed his genitals to two young women in a bowling alley.

He pled guilty to “public indecency and lewd exposure” according to the New York Post and spent four days in jail with two years of probation.

In a statement written by Erica Anne Coombs, one of the young ladies involved in the incident wrote that Jayson was harassing the third lady by the name of Nora; when he came up to and told her and another lady by the name of Trisha Walies, that he had a tattoo on his manhood.

She explained, “Trish and I were standing at the snack bar, and she came up and looked at my tattoo on my back, and she pulled down her sock and said, ‘look, my is fading, Then Jayson said ‘I have a tattoo on my dick.”

Coombs and Trish tried to ignore him and turned away but Boebert came up from behind and pulled his genitals out of his pants. According to her, he was covering the head and she only saw the shaft. They both went to Larry McCown, the owner of Fireside Lane Bowling Alley, who called the sheriff.

When the sheriff came to the incident, Larry said he had asked Jayson to leave the place but he wouldn’t buzz and became hostile. However, when asked, Lauren’s husband said he hadn’t exposed anything. Matter of fact he had stuck his thumb out of his pants as a prank and nothing more. Despite his claims, Trisha Walies wrote this in her defense “I know that wasn’t a thumb because thumbs aren’t 6 inches long.”

Jayson’s Wife Thinks Otherwise: She Blames The Bartender In the Alley for The Incident

Lauren Roberts was also present during the bowling incident and claims that her now hubby was innocent from the start and blames the ladies instead. In her book My American Life, according to Insider, she wrote, blaming the 17-year-old bartender at the bowling alley for constantly asking to see Jayson’s tattoo. She said he didn’t expose anything but instead “acted like he was going to unzip his pants” while being drunk.

Furthermore, she wrote that her husband’s friends teased the bartender by saying he has a tattoo in his private area, which made her even more curious and she pressured him to show her the tattoo.

Jayson was also arrested for Domestic Violence Against His Wife

In February of 2004, the former well-site supervisor was arrested for domestic violence charges against his then-girlfriend Roberts. Lauren Roberts at the time was dating her future husband Boebert.

A spokesperson for the Garfield County Court clerk told the New York Post, He “did unlawfully strike, shove or kick … and subjected her to physical contact.” Jayson was arrested and subjected to serve seven days in jail.

In May of the same year, Lauren took her revenge, in a fight with Jayson in his house. Police reports suggest that she scratched his face and chest and destroyed his residence. However, her action came with a price as she was charged with third-degree charges of criminal intent and underage drinking charges.

The Couple Got Hitched in 2007 and Have Four Sons Together

Despite all the drama and commotion, the duo walked down the aisle in June 2007. However, some sources claim that they were married in 2005. Whatever the case may be the couple has been together for over 15 years and living happily in their house in Silt, Colorado.

Since being together the two lovebirds are blessed with four sons. Their eldest son Tyler Boebert was born when Lauren was 18 years old. Tyler was born on March 21, 2005, Brody, was born in 2007, Kaydon Cline was born in July 2009, and Roman was born in 2012. Their mother once told a newspaper they are attending a private school in Glenwood Springs.

The congresswoman gave birth to her third son in July 2009. On that day she woke up in labor. According to Aspen Times, she woke her husband up and they took their kids to a family member and left for Valley View Hospital in Glenwood Springs. She said to the post:

“When we got to New Castle my water broke, and I started pushing and couldn’t stop. By the time we got to the West Glenwood exit, the baby’s head was out”

“I was just trying not to panic. I was really scared, but I knew I couldn’t be. My body kept pushing, and I couldn’t stop.”

She asked Jayson to pull over and help with the delivery. After the boy came into this world, Jayson and Lauren rushed to the nearest hospital for further treatment.

The couple owned a restaurant by the name of Shooters Grill in the state of Colorado. According, to The Herald Times, they had opened the business in 2013, due to the unpredictability in the oil and gas industry Jayson was working for. The restaurant housed a gun theme where waiters and staff openly carried firearms. Similarly, they also encouraged customers to carry firearms as well, if they wish to.

Since then it had gained a lot of media attention. Lauren Boebert wrote an opinion in Post Independent in July of 2017. She stated that they opened the business because they value their customers and not just to fill their pockets and make a profit.

” Our restaurants have never been just about guns, but what an interesting way to connect with people and have the opportunity to reach into their hearts from such a superficial, beginning level.

We have seen families reconciled, bodies healed, people brought into the Kingdom of God by making Jesus their Lord and so much more.”

They had expanded their business in Rifle in 2016, where the congresswoman gave all the credit to her husband.

However, in June of 2022, their restaurant shut down for good because the building owner didn’t renew their contract. Apparently, their lease wasn’t renewed due to the nature of their operation and in the light of school shootings around the country.

The health authorities accused the Boeberts after 80 of their customers suffered from food poisoning during the Rifle Rodeo in the year 2017. The Post Independent published an article where health authorities stated “Our open records request and follow-up found that pulled pork sliders served by Shooters Grill, ‘the only temporary food vendor reported to be present at the rodeo,’ was blamed for the sickness.”

However, Lauren denied the allegations saying:

“Of course with our mission being to serve the people we love and care for, we hold high standards to food safety. All of our employees undergo proper training. We have passed all of our previous and recent health inspections, of which I am happy to release. I want my business to be places of healing, restoration, and edification; certainly not sickness.”

She also said there were a lot of people who showed the same symptoms but didn’t eat the food from the rodeo. Moreover, she also said that news stations misinformed many people and that the stories they were telling were fake.

The congresswoman’s husband is estimated to have a net worth of $2 million which he has earned from his career as a supervisor and a former restaurant owner.

On the other hand, his wife Lauren Boebert is estimated to have a total fortune of $40 million from her career as a politician.