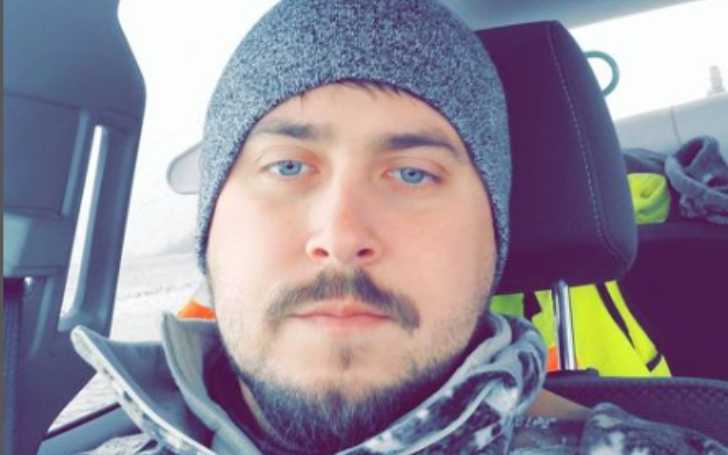 Jeremy Calvert is a TV reality star who shot to fame after his appearance on the television show “Teen Mom.” He is also a pipeline engineer by profession.

The reality TV personality starred in the show alongside his ex-spouse Leah Messer. As for their relationship, the two married in 2012 and divorced in 2015. Though the couple later parted ways, they are co-parenting their baby together. So, is there any chance of ex-husband and wife getting back together? And also find out, has Jeremy already moved on with his girlfriend.

Have a look at the article to know all the details about Teen Mom’s ex-partner Jeremy including his birthday, Instagram, relationship, and much more.

When Does Jeremy Calvert Celebrate His Birthday? His Biography and Parents

Jeremy was born in the year 1989 and celebrates his birthday on 6th January. He was born and raised in Elkview, West Virginia and his age is 33 years old as of 2022. Moreover, the reality star belongs to the Caucasian ethnicity and holds American citizenship.

Since Jeremy doesn’t talk much about his early life, his educational background is also not clear. Regardless, according to some sources, the reality TV personality enrolled at college in 2007 and completed his graduation in 2011.

Reports have also speculated that Jeremy was interested in sports as a child and played football and basketball while attending a local high school.

Is Jeremy Calvert In a Relationship in 2022? His Marital Life With His Ex-Wife Leah

As of now, Jeremy is not engaged to anyone. But in the past, Calvert was married to his ex-wife Leah Dawn Messer (a.k.a. Leah Messer). His then-wife is a TV personality who is more popular for her reality show “Teen Mom 2.”

Jeremy and Leah started dating in 2011 August. At the time, the actress was already a mother of two twin daughters and had just broken up with her ex-husband Corey Simms. Despite being in a love relationship with Jeremy and separated from Corey, Leah was still confused about whom she wanted to be with.

Later on, Jeremy proposed to her for marriage after dating for a couple of months. Following their engagement, the ex-duo tied knots on 4 April 2012 in a private wedding ceremony which was attended by their close friends and family members.

Calvert and Messer after a year of their nuptials became parents to a lovely daughter Adalynn Faith Calvert, whom they call “Addie.”

Are Jeremy And Leah Still Together?

The answer is both yes and no. While the former pair divorced in 2015, they still see each other as the one-time husband and wife, co-parenting their bundle of joy Addie together.

The reason why the pair then decided to part ways was that Jeremy couldn’t manage time for his family. He usually had to stay away from home due to his work. As Leah’s twin daughters also lived with her, it was difficult for her to raise all three kids together. Therefore, after several arguments, Jeremy filed for divorce and the lovebirds eventually separated.

Following their divorce, Jeremy’s ex-wife couldn’t handle the breakdown and abused heroin and painkillers. She also admitted taking medications and driving down the hill with her foot on the gas at the speed of 110mph. She later went to rehab in Arizona and got out after she was sober again.

Yes, Jeremy has a great relationship with his daughter Addie. Despite the partition, Jeremy and Leah seem to be on good terms. They have been great parents and are able to give the time and love of both mom and dad to their only daughter.

So, the Teen Mom stars are raising their child together. In fact, Jeremy’s Instagram is all filled with beautiful pictures of father and daughter. So. it looks like Addie spends more time with her dad Jeremy than her mother.

Jeremy Had An Intimate Moment With His Ex-Wife Leah Messer

Even though the reality couple has moved on in their life, Leah in an interview with PEOPLE disclosed she had an intimate moment with her ex-husband back in 2019.

Yet, when she was asked if they are getting back together, she said she didn’t want to repeat the past. She also said they are good friends but will never get back as a pair.

His Relationships Status After His Divorce

Jeremy after detached from his ex-spouse dated Kristen Elyse Blake which he revealed via his Instagram. Nevertheless, the pair broke up after a brief relationship and deleted all the posts related to each other. Similarly, Calvert was also engaged with Brooke Wehr for some time.

On the other hand, Leah is currently in a relationship with U.S. Army Officer Jaylan Mobley after dating some guys. The pair look happy together and her social media feed is all covered with their pictures.

What Does Leah’s Ex Jeremy Do For a Living?

Jeremy hasn’t mentioned much about his career but we know that he is a pipeline engineer by profession. Furthermore, he is also a TV reality show star who came to the limelight through the show called “Teen Mom.” He also bought a Charleston bar in 2020.

So as of now, the father of one is an owner of a bar, and alongside that, keeps traveling here and there regarding his work as a pipeliner. He even says being Addie’s daddy is also his job and it’s the best job in the world.

The net worth of the engineer is over $1 million as of 2022. He has collected his assets through his TV career, the engineering profession, and his bar. Being involved in so many jobs, it is not a surprise for him to be a millionaire.

Talking about the social platform, Addie’s dad is mostly active on Instagram. Jeremy has two Insta accounts; one under the name “jcalvert505” with 312k followers and the other as “calvertmtv505” with 287k followers. The second one is the new account as it says new official account in its bio. Other than this, Calvert is not active on other platforms such as Facebook and Twitter.

What is The Height Of Jeremy?

The pipeline engineer is 5 feet, and 6 inches tall.