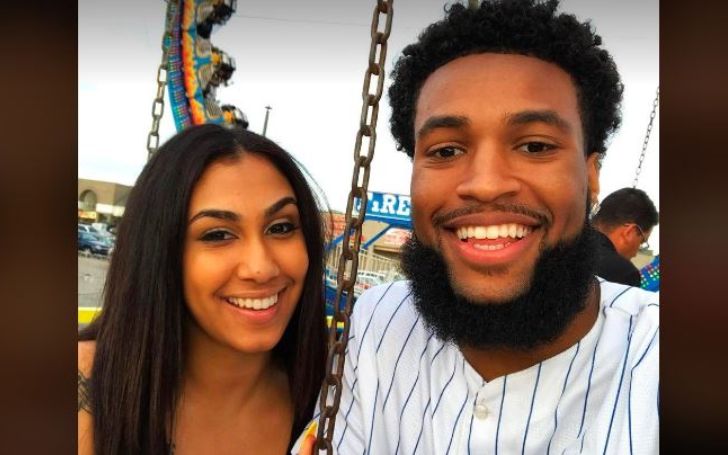 Chris Sails is a YouTuber, rapper, performer, and lyricist. He is better known as the ex-husband of Queen Naija, a contestant from American Idol season 13. Naija was able to last until the Hollywood round. With Queen, Chris used to host a youtube channel. The ex-partners were together from the early to late 2010s.

Although together for five years or so with a son in between, their relationship had a lot of drama. It included infidelity, messy fights, and numerous dissing of each other on social media. In the years since their divorce, both the exes have been in a relationship with other people and even have children with them.

The aftermath of their separation also entailed a lot of drama with Chris mostly mentioning and taunting Queen on social media. Sails for a couple of years didn’t pass up the opportunity to throw shades at his ex-wife, Naija and things have gone awry between the two numerous times. Review those times with an extended wiki on who exactly is Naija’s ex-husband, Chris Sails, where he hails from, what is his story, his career, and his current usuals all in the write-up below.

Chris Sails Is From Detroit

The rapper/social media person Chris Sails is a native of Detroit, Michigan who was born on Sep 23, 1995. Other than that there are almost zero iotas of things to say about Naija’s ex especially when it comes to his prior life. For all that Sails is exertive with his current life through his Youtube and social media, Queen’s ex-husband is yet to disclose his story before he came into the Michigan-born singer’s life.

The now 26 years old Sails started his Youtube career in Aug 2016 with his then-wife, Queen Naija. They were in Detroit when they first launched the channel.

Sometime later the ex-couple would move to Houston Texas. In addition to the Youtube channel which Sails started with his ex-wife, Queen Naija, he also has some other channels most of which he started in 2012.

Sails also has one more Youtube channel where he mostly posts videos of himself and his son; he created this one in July 2017.

Beside Youtubing, Sails has also produced some musical content of his own ranging from music videos to EPs and albums.

Some of his notable tracks include Letter To My Ex, Me And You, Selfish (feat. Anthony XI), Broke Her Heart, and Say The Word, among others. So far, Sails has released five albums and over two dozen EPs and Singles.

The Letter To My Ex-singer, Chris Sails, and Naija met each other at a high school basketball game in 2013. They then would date for a few months before tying the knot in 2014.

When together, Sails and Chris also started a channel, “Chris and Queen” in 2016 through which they would find more public recognition. The couple had their first child, a son, Christopher Jeremiah Sails or CJ on Feb 17, 2015.

In addition to CJ, Chris also has two more sons, Artist and Blake from his other relationship. Things weren’t good when Sails and Queen Naija were in a relationship.

Sails Cheated On Queen Naija With A Model

The reason for Sails and Queen’s breakup apparently was the former’s affair with a model named, Hehleena Million. Million through her own Youtube channel said she did have a relationship with Sails while he was still married to Queen Naija. Hehleena, however, explained she, at the time, didn’t know they were still husband and wife.

As per Million, Chris had told her that Naija was just her baby mother and that they had separated already.

Hehleena added when she first met Chris, he treated her like a princess and even addressed her as his wife in front of the waitress. Million and Sails also have a son Blake Sails who was born in 2018.

Sails Confirmed To Being Unfaithful Towards Queen Naija

Chris confirmed cheating on Queen in a 13-minute video. He had uploaded the recording on his and the Medicine singer’s then-joint Youtube Channel.

Upon knowing Chris’ confession, Naija also posted a vlog. There she said she was going to reflect and think about her future with her son’s father and for that, she was going to need some time.

Naija would nonetheless file for divorce from Sails in Dec 2017 and it would get finalized in April 2018. Upon separation, Naija gave the sole ownership of her and Sails’ Youtube channel to her ex-husband.

After divorcing Sails, Naija went on to marry a fellow Youtuber and vlogger, Clarence White also known as Clarence NYC. Sails’ ex-wife, Queen started a relationship with White in 2018. The two later would launch a joint Youtube channel by the name, Royal Family.

Together they also have a son, named Legend who was born in Jan 2019. Sails, once addressing Queen and her new husband’s relationship, stated that he wished nothing but the best for Queen and her now husband Clarence.

He said he doesn’t want to get back with Queen and wanted her and her husband, Clarence to be happy.

Chris Ex-Girlfriends; Has Chris Sails Moved On Too?

In addition to his aforesaid former partners, Chris also had a relationship with Erica Madison. The former couple when together also welcomed a son named Artist Sails born Sep 20, 2020.

The Detroit-born troublemaker was also in a relationship with another social media star, Savay. This was sometime in late 2019. As for now, it is unclear if Sails is dating someone new or just enjoying being single.

Back in July 2021, Sails uploaded a video on his Youtube Channel where he explained some of his previous actions. In the video, he candidly said the reason he kept dragging his ex-wife, Naija name on his videos was because he wanted to get more views so that he could make more money.

As such, Sails in the video admitted he was really going broke. Explaining his prior financial condition, the bushy-bearded guy stated,

“I felt like God put me on this earth to help.”

Sails then added in an attempt to help his family and friends financially, he kept naming the ex-American Idol contestant in his videos. He further said his normal videos weren’t making views but as he started mentioning Naija, each of his content was making as much as $5000.

So he decided to continue using Queen as clickbait. Sails, though explained he didn’t intend to cause a problem in her relationship with Clarence.

Chris Was Arrested For Assaulting His Ex-Girlfriend; He Was Banned From Using Instagram

In Oct 2018, Sails was arrested for assaulting his ex-girlfriend, Parker McKenna. Sails reportedly beat her so bad after he had seen a text message on McKenna’s phone from another man.

McKenna reported Sails hit her with an open arm on her cheek multiple times and even attacked her torso and other body parts. She said he left her with a black eye and several bruises.

The authority after arresting Sails held him in a Texas Jail on $15000 bail.

Further, the state of Texas also forbade him to leave the region and placed him on 24 hours surveillance via GPS until Feb 2019. McKenna and Sails started dating after the former had split with Naija.

Parker is known for appearing as Kady Kyle in the ABC series, My Wife and Kids from 2001 to 2005.

Sails Allegedly Also Caused Physical Harm To His Other Ex-Girlfriend

McKenna wasn’t the first woman who complained about assault against Sails. Another of his ex-girlfriend, Savay, too, in 2019, shared some images on social through which she accused Sails of beating her and not handling her well when they were in a relationship.

Chris, however, denied committing any bodily harm to Savay. The same year the father of three also caused another trouble when the Houston police detained him for impersonating one of the officials. He allegedly did the police impression with three other people.

Also at one time Chris and one of his other ex-wives were also accused of selling iPhones at a modest cost on their channel. It was a woman named Lorena Mireles who blamed them for shaming her and not even giving her any iPhone even after she had paid them.

Around April 2020 also the time when Chris was still involved in the case of assaulting his ex, his other former partner, Naija revealed her son with Sails had been missing.

She disclosed the news through her Instagram story where she cried for fans’ help to locate their son, CJ. Christopher at the time was with Sails; he, however, had just been arrested.

“Whoever has my son, contact me NOW. If you guys know who Chris [is] around and with DM ME!! I can not locate my son! Nobody is answering me,”

Fortunately, later Naija reported she was able to locate her son, CJ. The Platinum-certified singer gave assurance to people that everything was fine and expressed her gratitude for her fans’ help.

How Rich Is Chris Sails; What Is His Net Worth?

Things may have gone dire for Chris in recent years both in terms of family and money. However, now that he has access to his YouTube channel and is occasionally working on his music, the ex-husband of an R and B singer must be a bit liquid and have it easy in those regards.

If nothing at all, by general estimates, his YouTube with 3 million subscribers in all possibilities could be bringing him around a quarter of a million dollars a year.

There are also paid promotions and stuff to consider when mentioning the model of his social media income.
It nonetheless is a riddle how much he has to his net worth; his Instagram and other social media lifestyle, in any case, implies the Far From Perfect singer might be worth anywhere from half a million to even a whole.

Who Is Emma Krokdal? Insight On Inside Life Of Dolph Lundgren’s Fiance