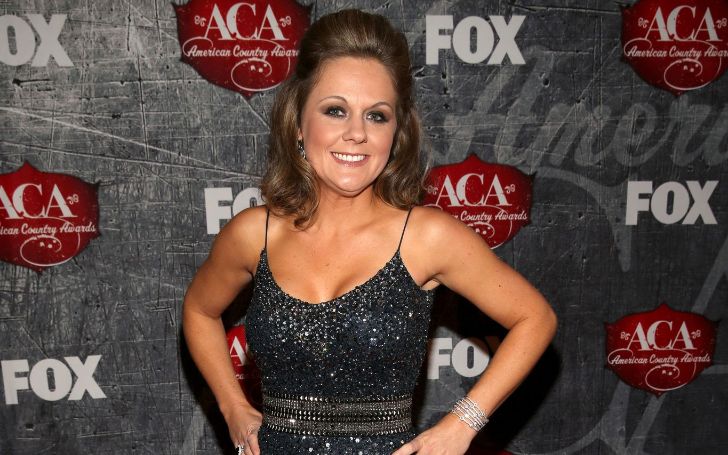 Jessica Aldean came to the limelight as the ex-wife of an American country music singer, Jason Aldean. In 2010, the Recording Industry Association of America (RIAA) gave the certification of quadruple platinum to her former spouse’s album titled My Kinda Party.

Besides, Jessica and her ex-husband Jason did stay in a long-term marital relationship, however, after more than a decade, they went on their separate ways. So, what was the reason they had to end their marriage? Did they even share any kids?

Jessica Aldean was born Jessica Ann Ussery on October 18, 1979, in Georgia. As of 2023, she is 43 years old. Unfortunately, she hasn’t revealed the details of her parents, siblings, or any of her family background. In addition to that, Jessica belongs to the Caucasian ethnicity and is American by nationality.

On the other hand, her ex-husband Jason Aldine Williams was born on February 28, 1977, in Macon, Georgia. Similarly, he is the son of Barry Aldean (father) and Debbie Aldean (mother).

Talking about Jessica Aldean’s educational background, she went to study at Windsor Academy in Macon, Georgia. It was the same High school, her former husband also attended.

Profession: What Does Jessica Aldean Do For A Living?

As per a TMZ report, Jessica Aldean is a self-employed woman. Similarly, as per the claims, Jason’s ex-wife works as a certified life coach, in Fort Lauderdale, Florida, United States. But, in which institute she has landed the job is still under the media radar.

Previously, Jessica has starred in her ex Jason’s music videos like Laughed Until We Cried (2007), and Wide Open (2009). Not only that but, she reportedly also worked as the one-time manager of her ex-hubby. She used to manage his finances, picked up his phone calls, handle schedules for a meeting with her ex-husband, and make business calls.

Besides, as we already mentioned, her ex-husband Jason is a singer. The country singer’s top ten hit songs include When She Says Baby, Dirt Road Anthem, Big Green Tractor, Fly Over States, If I Didn’t Love You, Why, Tonight Looks Good On You, Take A Little Ride, Burnin’ It Down, and She’s Country.

Prior to becoming a star, he learned to play chords thanks to his dad. Before going to work, his father always used to map out guitar chords on notebook paper for him. One can say, his parents have helped and encouraged him to become what he is now.

As we have said before, Jessica and her then-husband attended the same high school. In fact, their love story also began while they were teenagers in high school. The singer himself has disclosed their early romance to US Weekly. He told, “Jessica and I have been together since we were teenagers.”

After dating for some years, on August 4, 2001, Jessica and her ex-husband Jason Aldean walked down the aisle. Their wedding was held in Macon, GA Bibb County, in a very low-key ceremony. They were in a healthy relationship until one day Jason destroyed his marriage life by himself.

Why did Jessica and Jason Aldean’s Marriage Ended? He Kissed a Woman

After staying in a marital relationship for more than eleven years the former flames decided to part ways. A few months before their 12th marriage anniversary, on April 26, 2013, Jesicca filed for divorce, citing irreconcilable differences, in Tennessee.

One year prior to their separation, on September 30, 2012, her former husband was in the media headline for acting inappropriately at a bar with the former American Idol Contestant, Brittany Kerr, who eventually became his future wife.

However, it wasn’t the only reason Jessica and her husband Jason decided to end their marital relationship. As a matter of fact, Jason’s rep has confirmed that they were already having personal problems. Apart from those ups and downs, the good part of their separation is that they are still on good terms even if it’s as a friend.

From their marital relationship, Jessica and her former husband Jason not only shared memories beautiful, but also two daughters. On February 14, 2003, the exes welcomed their first daughter Keeley Ann Williams.

Similarly, on August 20, 2007, Jessica gave birth to their second daughter Kendyl Alden Williams. As of now, both Jessica and Jason are co-parenting their children. Although the ex-celebrity spouse is very private, Jason keeps on updating his fans/well-wishers that his kids are growing healthy and happy.

Is Jessica Aldean in A Relationship? Does she have a new husband?

Yes, Jessica Aldean, after separating from Jason, is currently married. She started her new journey of life with her new husband Jake Marlin. Her hubby is reportedly an electric lineman. Similarly, talking about their wedding, the lovebirds exchanged their vows on October 17, 2015.

There isn’t any info about their kids (if any). Whatever the case is, we wish Jessica and her new husband Jake lead a blissful marital relationship.

Jessica Aldean’s ex-spouse is in a marital relationship with Brittany Kerr. Jason and Kerr started dating in late 2013 and eventually made their first public appearance as a couple at the 2014 CMT Awards. Furthermore, the singer and his current wife decided to tie the knot on March 21, 2015.

Unlike Jessica, the We Back singer has openly shared about his kids with his current wife Brittany. They have welcomed a son Memphis Aldean (b. December 1, 2017), and a daughter Navy Rome Williams (b. early 2019)

What Is Jessica Aldean Doing Nowadays?

The answer to the frequently asked question, what is Jessica doing in 2023, where is she, is still unknown. Well, many have speculated that Jason’s ex-wife still resides in her hometown of Georgia, however, it is only a rumor until she confirms herself.

As per other speculations, Jessica is currently living with her family in Fort Lauderdale, Florida, United States. Besides, coming back to what she is doing now, Jessica doesn’t seem to be doing anything as of 2023.

As Jessica Aldean herself wasn’t involved in any money-making career just like her former partner Jason, her fortune is not available. On the other hand, her ex-husband has wealth which is in seven figures. To be more precise, the singer Jason has an estimated net worth of $80 million.

Is The Celebrity Spouse Active On Any Social Media Platforms?

No Jessica is not available on any sort of social media platform. Besides, her former hubby is the exact opposite of Jessica. He has an account on every social media. On Instagram, Jason has 4 million followers, 9 million on Facebook, and almost 4 million on Twitter.