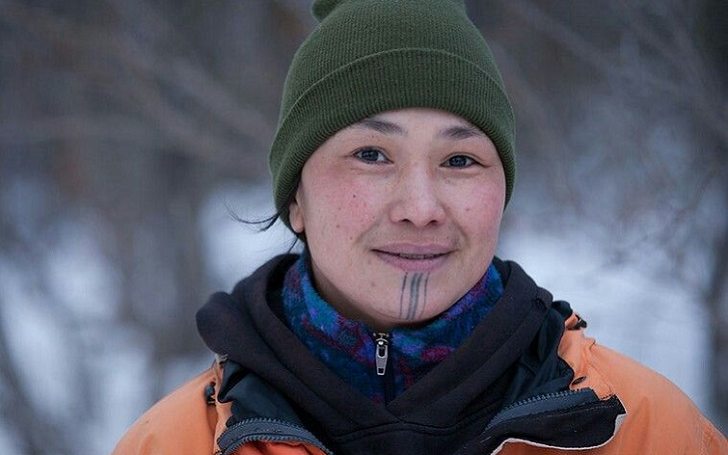 Agnes Hailstone is one of the veteran reality TV personalities. She came into the light and became a household name after joining the documentary TV series Life Below Zero. The show has already won four Primetime Creative Arts Emmy Awards.

Besides, Agnes is blissfully married to her co-star from the show, Chip Hailstone. The Hailstone family lives in the wilderness of northwestern Alaska.

Let’s trace out the unexplored facts about Hailstone including her children, marriage, tattoo, net worth, and a lot more!

Agnes Hailstone was born in Noorvik, Alaska. She belongs to an Inupiaq Alaskan natives whose roots are deeply extended roughly from the Bering Sea to the northernmost part of the Canada–United States border.

Besides, Hailstone possesses American nationality and belongs to the Iñupiat ethnic group.

Agnes Hailstone is Married To Her Husband Chip Hailstone

Hailstone has been married to Chip Hailstone for a long time now. Her hubby Chip was born and raised in Montana. He went on to visit Alaska at age 19 and never looked back and settled there forever.

Chip after a few years met his then-future wife Agnes and later they got married. They both are skilled hunters and are popular across the world as a part of the series Life Below Zero.

Hailstone is the mother of seven children: Two from Her past affair

Hailstone has five daughters with her husband Chip. They are Iriqtaq, Tinmiaq, Mary, Caroline, and Qutan. All of them are born and raised in Alaska. Similar to their mom, all of them enjoy hunting wild animals and fishing in the Kobuk River.

Besides, Agnes also has two sons named John and Doug from her past affair. The information about their biological father is completely hidden from the spotlight as Agnes never revealed anything about her former partner.

They currently reside in Noorvik near the Koburk River.

The couple is also a grandparent

Agnes and Chip became a grandparent when their daughter Iriqtaq Hailstone gave birth to a child, a son, Wade in November 2016 at the Alaska Native Medical Center.

Chip often posts photos with his grandchild from his hunting on social media. In November 2019, Life Below Zero shared a short clip on Facebook featuring Hailstone rabbit hunting with Wade.

Agnes Hailstone’ Husband Chip was once put into a Jail

If you have ever watched season 11 of Life Below Zero, you definitely noticed that Chip Hailstone wasn’t there. He was imprisoned for 15 months at the time after the reality star was guilty of two counts of perjury and making false statements to cops.

In 2011, Chip made a claim that an Alaskan state trooper physically assaulted his then 17-year-old daughter Tinmaiq. While talking about the second incident, Chip asserted a Noorvik resident pointed a rifle at his daughter following a heated altercation that also involved his stepson. Concerning the same, Chip was sentenced to three years probation initially but he later appealed the ruling.

While the reality TV personality was still in jail one of his fans also requested President Trump to help him out,

Mr. President seen your justified pardons first to people who deserve them. Chip Hailstone of Life Below Zero should be considered. He spent year in jail for lying to police. Please study his case and act

Following his release, Chip said, “I’ve got real rifles in my hand, I’m back to being my old self. I’m going to have a good time because I missed out on this last year.”

His wife Agnes told that the family was patiently waiting for Chip to come home. She spent such a gut-wrenching time hunting alone with her daughters.

Is Agnes hailstone still on Life Below Zero?

Hailstone became a TV star after her appearance in the TV series Life Under Zero. It has premiered 13 seasons to date on National Geographic Channel.

The popular show documents the rural and subsistence lifestyle of people who live in the secluded state of Alaska. They hunt a variety of animals to survive.

Curly goes out to get bait fish with his dog, Jethro Jr., in order to set out halibut skate lines. #LifeBelowZero pic.twitter.com/5CNWW9k5hJ

Other current and former cast members of Life Below Zero include Sue Aikens, a river camper, Erik Salitan and Martha May Salitan (are an outdoor survivalist), Andy Bassich and Jessie Holmes (are dog mushers), and Glenn Villeneuve, who is a survival expert.

Agnes Hailstone has a combined $100,000 in Net Worth with her Hubby Chip

Agnes Hailstone and her hubby Chip have a combined net worth of $100,000, as per Celebrity Net Worth in 2021. The two has predominantly earned money from their TV career.

Sources suggest Chip is paid a salary of $40,000 a year from their career on TV.

Hailstone maintains a very low-key social media life. She is totally inactive on platforms like Facebook, Twitter, and Instagram. But her fans never stopped praising Agnes for her great contribution to the Alaskan inhabitants’ lifestyle. The woman also has a gifted talent in several fields who can hunt, fish, make clothing, build homes, and more.

One of her fans tweeted on Life Below Zero’s Twitter account greatly appreciating her role inside and outside the home,

The account has over 22.2k followers. It often shares adventure posts from Alaska featuring every cast member of the series.

Agnes Hailstone Has a Tattoo on Chin

The Life Below Zero’s Hailstone has inscribed a tattoo on her chin which looks like a straight line. It is a traditional Alaskan tattoo that mostly females ink in order to pay homage to their ancestors.

Well, Hailstone has a certain kind of proximity towards her tattoo primarily because of its cultural significance.

Who Is Chip Hailstone? Every Details You’d Been Looking For