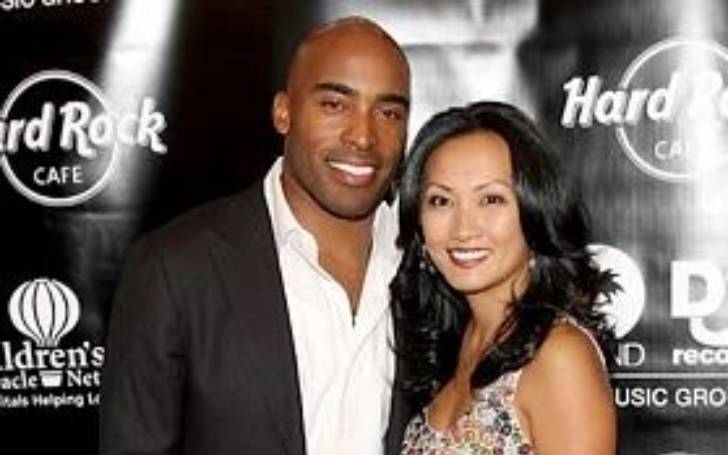 Ginny Cha born Virginia Joy Cha is a media personality and a fashion publicist. Cha rose to the limelight with her marital relationship with former footballer Atiim Kiambu ‘Tiki’ Barber. Barber was a running back who played for the New York Giants of the National Football League for ten seasons.

Cha and Barber were together for over a decade and shared four children. However, things started going downhill for Ginny when Tiki dumped her for another girl. That alone while she was pregnant with their twin daughters.

After Barber’s infidelity, the then-husband-wife went separate ways with Cha filing for divorce despite being pregnant. So what is Ginny doing after her divorce? Is she married to anyone? Where are her kids? Find out more about the former celebrity spouse with us.

Virginia ‘Ginny’ Cha was born on 7th April 1975 in the United States of America. She is the younger daughter of Korean-Vietnamese parents, Won Cha and Nga Cha. She is 47 years old as of 2022.

Cha has an Asian(Korean-Vietnamese) ancestral history and belongs to the American nationality. Likewise, she grew up alongside her older sister Myong Cha.

She reportedly went and graduated from Siegel High School. She later enrolled at the University of Virginia where she met her then-future-husband Tikki during a computer science class.

On the other hand, her famous former-husband Atiim Kiambu ‘Tiki’ Barber was born on 7th April 1975 in Roanoke, Virginia. He is 47 years old as well. Tiki went to the University of Virginia and majored in commerce.

What Is Ginny Cha’s Profession?

The 47-year-old mother of four is a former publicist for Zegna. It is an Italian luxury fashion house for men’s designer clothing. Though she took a break from her work at Zegna, she circled back after their first son, Atiim Kiambu Jr. was in pre-school.

However, two decades later and after a messy divorce Ginny is living a private lifestyle and her current profession is not known. She may or may not be working as a publicist for Zegna as of 2022.

Ginny Cha’s Ex-husband & Her Parents Had A Special Bond

Unlike other parents who let their children go out and explore life on their own, Ginny’s parents were quite the opposite. They were very supportive of Ginny and Tiki and even lived with them taking care of their two sons AJ and Chason.

During an interview, Ginny and Barber talked about their bonding and how they live happily in a suite on the Upper East Side in New York City. He said,

“Besides the fact we’re extremely multi-ethnic, Korean, Vietnamese, black, which I think contributes to our kids’ looks, our family dynamic is a lot different than people expect. It’s different and it works for us.”

Back then, Ginny’s husband Barber and her father had a similar tastes in food as well. Both of them disliked turkey thinking it was too dry. Similarly, her ex-hubby also had also a great relationship with his mother-in-law and revealed that he liked it when his mother-in-law cooked breakfast for him every morning.

As mentioned above, the parents of four first met while attending the University of Virginia. They crossed paths during a computer science class when Tiki was in his second year and Cha was in her first year.

After dating for a while, they got married on 15th May 1999 in the presence of family and friends. Likewise, they welcomed their first child, Atiim Kiambu Junior aka A.J. on 8th July 2002.

Two years later, they welcomed their second child, son Chason on 18th March 2004. Moreover, Ginny and Tiki added two more kids into their family, Riley, and Ella on 24th May 2010.

Despite their decade-long marriage and having four kids together, the former pair had a very messy divorce.

Barber Cheated On Ginny Whilst Being Pregnant With Their Twins

What worse could have happened to you while being pregnant? Well, getting cheated on by your long-term husband. While it already sounds terrible to us, imagine what Ginny Cha went through when she found out her loving husband of over a decade cheated on her with his assistant.

According to a source close to Cha,

“She had no idea what was going on. She had no idea about this relationship with Traci Johnson until he left in late November, Ginny is devastated by this. All of this came out of the blue for Ginny. People may say, ‘How could she not know?’ But she really didn’t. Tiki is a guy who travels a lot.”

They further revealed that Barber and Johnson began dating in early 2008 when Traci was a student at Mount St. Mary College and just 21 years old. Back then, Tiki even showered her with lavish gifts, luxury clothing, and flowers.

After finding out about her husband’s infidelity, Ginny banned her husband from the delivery room. He was reportedly forced to wait outside while Cha gave birth to their twin daughters Riley And Ella b. 24th May 2010.

Not to forget, Cha had filed for divorce and sought a settlement before the delivery. A source close to him said,

“He was absolutely under the impression they were holding off on divorce filings until after the kids were born,”

Ginny and Barber’s divorce was finalized on 12th July 2012.

Is Ginny Cha Currently Married To Anyone In 2022?

Following her messy divorce with the former Giants star, Ginny is living a quiet private lifestyle. Looking at her IG profile @gjcha, she seems to be married to a man, however, the identity of her second husband is not revealed. We can see her with a man in her Instagram profile picture, also, she currently goes by Ginny Cha Hoffman.

On the other hand, her former husband is currently married to his mistress-turned-wife Traci Johnson on 20th July 2012. They tied the knot in a simple civil ceremony in a New York courtroom.

P.S. Tiki and Johnson’s nuptial was just eight days after his divorce was finalized with Ginny.

Similarly, the pair welcomed their daughter Brooklyn on 27th December 2013 and their second daughter Teagan in July 2016. Tiki altogether has six children from his two marriages.

How Rich Is Ginny Cha Now?

As her current profession is not known, her exact net worth is also not revealed to the public. However, back in the day, she worked as a publicist for Zegna for which she surely earned a decent fortune. According to various online tabloids, Cha is worth around $500 thousand in 2022.

Moreover, her ex-husband Tiki Barber is currently worth around $16 million. The father of six is currently working as a radio host for WFAN with Brandon Tierney on weekday afternoons airing 10-2 pm.