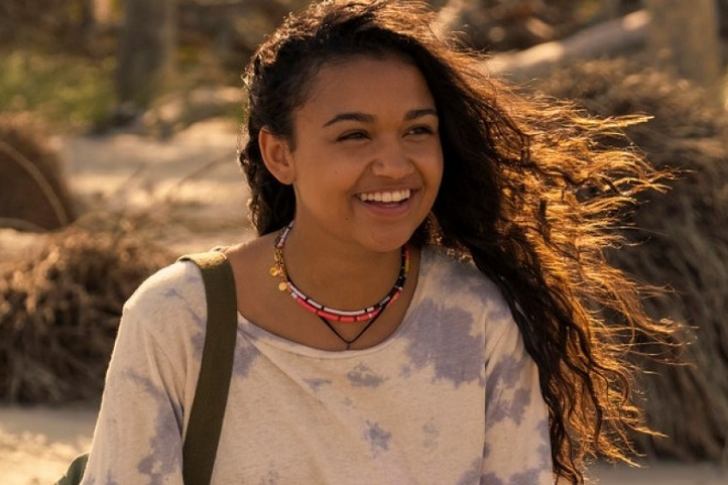 One of the flourishing talents of the entertainment industry, Madison Bailey rose to prominence with her role in the smash-hit superhero TV drama Black Lightning (2018-19). The promising actress grabbed worldwide attention after portraying Kiara in Netflix’s teen drama web series, Outer Banks. In the series, her dad is a successful restaurant owner while Kiara is an environmentalist with a rebellious streak.

Talking about her on-screen dad, fans are curious to know if Madison is adopted by her real-life parents? Is it true? In the meantime, also, know how many siblings does Bailey have?

Besides, Madison was reported to be in a relationship, but with whom? Are they still dating? Let’s find out all the answers to these queries here today!

Is Madison Bailey Adopted? All About Her Parents and Siblings

Bailey was born on 29th Jan 1999, in Atlanta, Georgia, United States. She has English ancestry from her dad’s side and has an American nationality. After her foster parents, Alex Bailey and Mary Katherine Bailey adopted her, Madison moved to Kernersville, North Carolina.

Later on, Madison was raised by her adopted parents Alex and Mary. Sadly, her adoptive mom Mary passed away at the age of 65 on August 9th, 2018. She was battling with Sepsis. She died after celebrating her 45th wedding anniversary with her husband, Alex.

But, the information about Madison’s biological father and mother is still missing.

Madison Bailey is the youngest of Seven Kids

The actress is from a joint family. She has six older siblings- three brothers, Vance, Ricky, Greg, and three older sisters, Amanda, Kristina, and Katie.

Her older sister Katie also appeared in Netflix’s Outer Banks as her stunt double. Likewise, her sister is an accomplished gymnast.

Madison said of her sista.

She’s in gymnastics. My sister had never done stunt (work), but I talked with the stunt coordinator and it was such a chill show…. It’s amazing they gave us that opportunity and experience together

Is Madison Bailey Bisexual? Claims to be a Pansexual

Well, it might come as a shock for many but it is true. Madison herself has claimed she is a pansexual. She opened up about her sexuality in a TikTok video. According to Bailey, when it comes to love, she doesn’t follow the status quo, male-female romance. She cares more about what is inside a person as opposed to what is outside.

Moreover, since working in the show, Outer Banks, she has put up a pride flag in her Instagram bio, showcasing her support. We can say, she most recently came to know about her sexuality.

And for those who still think being gay and pansexual are the same thing, think again people. Gay means when you are interested in a same-sex relationship whereas pansexual means you are open to every gender. So it is safe to say, Madison is not gay.

What is Madison Bailey Relationship Status? Who is Her Girlfriend or Boyfriend?

As the previous sexual thing wasn’t enough to shock you, here comes another one. Madison is taken, ladies and gentlemen. She is happily dating Mariah Linney, a basketball player from the University of North Carolina.

Bailey announced her love affair through a cute and romantic TikTok video. In the background of the video, we can hear ‘I am not falling’ implying not falling in love. Suddenly, her girlfriend Mariah comes into the picture, and the line changes to ‘I am falling.’

Ever since announcing her relationship, Madison has been sharing a lot of pictures with her partner. To be honest, they really look made for each other.

Well, the Outer Banks star sure looks smitten with her newfound love. Let’s hope to see the couple together for a long time. We wish they never break up.

Speaking of a break-up, sources suggest the actress was previously in a relationship with JJ Hawkins, an actor.

How did Madison first meet Her Partner, Mariah Linny?

Gone are the days when people used to meet their future girlfriend or boyfriend outside. These days, you can easily find a person online. Likewise, Madison’s love story also started on a similar note.

Recently, Madison talked about how she first came across her partner. Apparently, the actress first saw the basketball player on TikTok and was attracted instantly. She hit her up and they starting chatting.

Soon Madison invited Mariah to her house in LA and the rest, as they say, is history.

Madison Bailey Is a Music Lover From an Early Age

Now a promising actress, Madison Bailey grew up singing and is still learning to play guitar. She also did a school musical with her colleagues.

Another cover with my shitty uke playing. Enjoy friends. #Singingandplayingisveryhard

Due to her nervousness, Bailey used to be scared of singing in front of a big crowd. Despite all that, she still follows her lifelong dream to become a singer until she turned 13.

Madison also has a YouTube Channel TheadisonLilly. She created it back in April 2013. The actress used to post a lot of music covers, however, Bailey hasn’t posted any videos to her channel for the past six-year.

While Bailey was attending East Forsyth High School, in Kernersville, Forsyth County, her modeling agent asked if she would sign up for an acting gig. At first, she had planned on never doing acting until she was a freshman at the school.

So, she turned down the offer, refusing to be part of show business, at the time. But Bailey later called them and she has never looked back since, paving her way to many iconic roles in TV shows. She remembered,

“I already had an agent for modeling and they had wanted to sign me for acting for so long but I said no. And then I called them, and they were so excited that I had changed my mind, and I haven’t thought about doing anything else since.”

The young star Madison Bailey became the household name when she snagged the role of Kiara in the newly-released Netflix’s teen drama web series Outer Banks.

The show premiered on Netflix on 15th April 2020. It follows a group of teens who belongs to a working-class family. In the hit series, she appears alongside Madelyn Cline, Austin North, Drew Starkey, and Charles Esten.

Bailey has a close relationship with her Outer Banks co-stars. They often share beautiful snaps of themselves on their respective social media handles.

Together, they have already experienced a lot of adventures like bungee jump, surfing, and boating.

Other Movies and TV Works

Madison Bailey kicked off her acting career playing Caroline in the TV series Constantine in 2015. The same year, she went on to portray Mary Hold Bear in Swamp Murders.

Furthermore, in 2017, the actress appeared in Mr.Mercedes as Chole and in Murder Chose Me as Angela Henry. The following year, Madison was cast in two other TV projects Nightclub Secrets and Two Roads.

Bailey’s big break came on the TV when she played Wendy Hernandez, a meta-human with aerokinesis in Black Lightning. She appeared on the show from 2018-19.

The actress scored her first silver-screen role in a 2020 comedy Impractical Jokers: The Movie. Furthermore, she is also credit for her work on Constance, SuperCool, and Discarded Things.

Madison fancies horse riding. She began riding at the early age of seven. She frequently shares photos of riding horses on her social media handles.

Other Interesting Facts of Madison Bailey