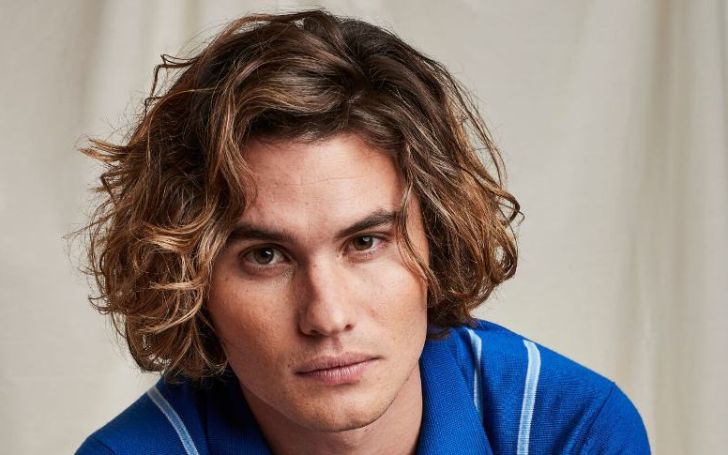 Chase Stokes is an American actor most recognized for his portrayal of John B in the Netflix series “Outer Banks”. He has also appeared in many other movies and TV shows that include One Of Us Is Lying and Stranger Things (2016).

Well, in this article, apart from his career, we will also talk about his parents, his family background, and his early days.

Moreover, we will also find out if Chase has a girlfriend or is dating anyone. Let’s zoom on.

Chase Stokes Wiki: Where Was He Born?

Chase was born on September 16, 1992, in Annapolis, Maryland, in a Christian family. However, he spent a major portion of his formative years in South Florida.

Talking of his education, he finished school education from Timber Creek High School, Orlando in Florida, earning a graduate degree in 2010.

Likewise, Chase finished his college with an Association of Arts degree in 2012. Thereafter, he attended the University of Central Florida where he earned an MBA degree in 2015.

Jeff Stokes’ Parents Divorced When He Was Young

His father, Jeff Stokes, is a businessman while his mother, Jennifer Canning, is a housewife. But Unfortunately, when he was still young, his parents did not get along and got a divorce.

As for a fact, his step-mom is a psychologist by profession. Similarly, his father, as an entrepreneur, is the owner of the president of STRIDE franchise LLC.

Chase Stokes Has Two Half-Siblings: One Brother and One Sister

Chase is the only child of his parents. However, he has two younger half-siblings, brother Kaden Stokes and a sister, Kendall Nicole Stokes, from his father’s second marriage to his step-mom.

The 27 years old actor has appeared in many movies and TV shows. He made his acting debut in 2015, appearing in the short film Lost Island, where he portrayed a character named Captain Charles Whitaker.

This was followed by his role in web series Chase, where he played Ethan Terri. Soon, in 2016, he started his journey on TV with science fiction, drama-horror web television series Stranger Things. Here, we have listed his movies and TV works.

Stokes Is Best Known For His Role In Outer Banks

While he has portrayed multiple characters in many movies and TV shows, he is mainly known for his role in action-adventure mystery teen drama web television series Outer Banks.

In the series, Chase plays John B, the ringleader of the Pogues, who goes missing. The plot primarily revolves around him.

Check Out The Bloopers On The Sets Of Outer Banks:

What Did He Do Before Films?

Prior to putting his steps into films, he did several part-time jobs including as a lifeguard at Orlando Country Club; there he worked for 4 years.

Following this, he worked as an Abercrombie & Fitch model for a few years.

As of August 2020, actor Chase Stokes is dating his Outer Banks co-star Madelyn Cline. The pair who play love interest on the Netflix series are girlfriend and boyfriend in real-life too. Chase confirmed his relationship with Madelyn in an Instagram post while they had been spending their quarantine time together.

Stokes and his now-girlfriend, Madelyn sparked their relationship rumor after they started doing press for Outer Banks from their home while the country was on lockdown in April 2020. Later, both of them confirmed that they were quarantining together with a couple of other Outer Banks co-stars including Drew Starkey.

Finally, after months of speculations, Chase took to Instagram in mid-June confirming his romance with Madelyn. On 14th June, Chase shared some snaps from their beach date writing “Cats outta the bag ❤️” in the caption.

The couple has been flaunting their romance on social media ever since. Not only this but on April 4, 2021, Chase made another Instagram post where he confirmed his one year of togetherness with his girlfriend Madelyn.

Where Did They Meet?

Well, there have been several speculations on when and where Chase and his girlfriend met for the first time. Many online tabloids have mentioned the lovebirds met on the set of Stranger Things since both of them are part of the Netflix series.

However, Chase denied having met Madelyn on the set of Stranger Things in an interview with Life & Style saying, “We actually never met [on that set]. She did season 2 — I did season 1, and I was there for, you know, a millisecond. So if you blink, you’ll miss me.”

In fact, Chase and Madelyn met just a couple of weeks before the production of the Netflix series Outer Banks started 2019. Madelyn reminisced her first meeting with Chase during her appearance on The Daily Podcast with Lance Bass. There, she revealed her boyfriend had asked her to walk on her back just minutes after they met.

But he had been in a relationship in the past. As per the reports, he previously dated Xio Montalvo.

However, for the unrevealed reasons, the couple broke up, and he has since remained single.

Just for a fact, he has a beautiful pairing with Madelyn Cline in Outer Banks.

What Is Chase Stokes Net Worth?

As of 2021, Chase Stokes has an estimated net worth of $700,000. While he earned a good sum from his roles in the past, his major income source at present is his role in Outer Banks.

Social Media: He is active on Instagram, where he goes by @hichasestokes and has over 4.5 million followers.